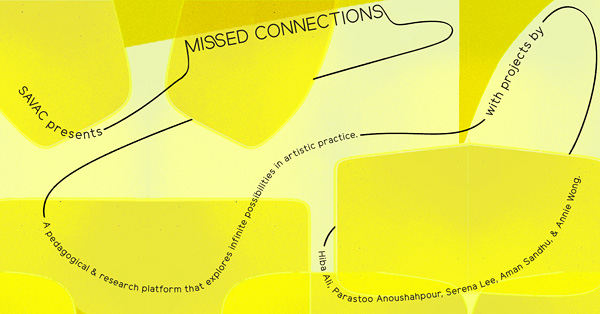 SAVAC is pleased to announce Missed Connections – a new pedagogical and research platform that will live on the intersections of modes of thinking, doing and being. By bringing differing ideas, philosophies and artistic methodologies closer together, the program’s ethos unfolds in the power and necessity of convergence.

With the intention of a deeper understanding of situated and syncretic artistic practice, the program attempts to arouse curiosity and wonder through learning together and welcoming the unexpected. Missed Connections hopes to capture the energetic field of that fleeting moment of connection between people or ideas.

Over the course of 2021, Missed Connections will unfold as a series of explorations by artists Hiba Ali, Parastoo Anoushahpour, Serena Lee, Aman Sandhu, and Annie Wong, whose projects take place concurrently as reading groups, learning exercises, sensory workshops, conversations, and guidebooks. Public events will take place online (for now) and culminate in a digital compendium of visual and text-based learning tools.

The Black Indian Ocean Reading Series by Hiba Ali visualizes the histories and futures of African descent communities in the Indian Ocean region through curated film screenings and generative pedagogy.

The time that separates us by Parastoo Anoushahpour considers Lot’s wife, an ancient salt-rock formation overlooking the Dead Sea, as a portal through which to face the contemporary Jordan River Valley and the stigmatized realms of desire, sexuality, and gender encoded within this highly mediated political landscape and its related sites of mythology.

Never No More Lonely by Aman Sandhu is a research project looking into improvisation, specifically forms of improvisation found in jazz as a methodology for decentering whiteness in artistic practice, from the studio to pedagogy to institution-making.

Like the children’s word game, Opposite Day by Serena Lee is an entry point for playing with paradox through language and its limits. As an open-ended framework for embodied study inspired by oblique Daoist dialogues, Opposite Day brings the artist and ‘players’ together for a series of encounters across time zones and proximities, kneading the edges of talking and doing.

How to Be a Chinese Ally by Annie Wong is an anti-racism audio, print, and online resource in Mandarin and Cantonese for the Chinese community in Canada. In the form of personal essays and intimate conversations with Black and Indigenous artists and researchers, the resource documents Annie Wong and collaborator Chen Chen’s process of disentangling Chinese identity with white supremacy in light of their own vulnerability and complicity.

Missed Connections kicks off in March 2021 with the first public event from Hiba Ali’s The Black Indian Ocean Series. Supplementary pedagogical material such as readings, videos and audio will be released to accompany each event of the series.

The inaugural event is a film screening of Beheroze Shroff’s compilation documentary, Voices of the Sidis, Indians of African Descent (2004- 2012), which features the Sidi community of Gujarat and examines the intangible cultural heritage of African descent communities.

Friday, March 19th, 2021, 7pm – 8:30pm EST
Film Screening: Voices of the Sidis, Indians of African Descent (2004 – 2012) by Beheroze Shroff. The screening will be followed by a discussion with Beheroze Shroff and Jazmin Graves, moderated by Hiba Ali.

Register in advance for this meeting here. After registering, you will receive a confirmation email containing information about joining the meeting.

The Black Indian Ocean Series is funded by SAVAC and the Oregon Humanities Center’s Endowment for Public Outreach in the Arts, Sciences and Humanities.

Monday – Thursday
10am – 5pm
By remote appointment only 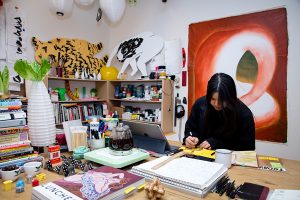 Deadline
May 10
Venue
Art Gallery of Ontario
Toronto, ON 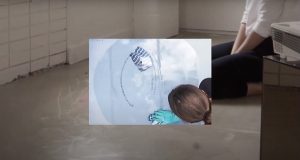 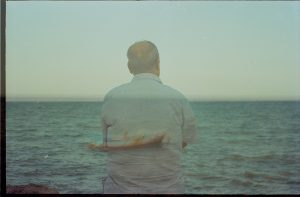