Doris McCarthy: The Arctic and beyond

Focus on Doris McCarthy – the Arctic and beyond

McCarthy – the Arctic and beyond is the first of the Focus series presenting for sale selections of work by many of our artists from over the last 54 years.

You can almost feel the warmth of the sun scuttling along over the pressure ice in Pressure Ice in Late Light, Broughton Island, as the open water and ice floes push and creak their way along in never ending abstract patterns (a boon for Doris). And the sun tipped mountains with patterns of snow reflecting those of the floes. A wonder that Doris made even more dramatic in this stunning painting.

In 1984, when first exhibited at the Wynick/Tuck Gallery, it was one of a small number of larger scale canvases that Doris painted, during each body of work, at Fool’s Paradise, (FP) her Scarborough home and studio. Through the winter months, Doris referred to her plein-air panels, watercolours and photographic documentation, recalling the most recent trips, in the studio warmed by its Franklin wood stove, keeping Doris and her oil paints ready to go.

Following her retirement from teaching art in 1971, her sketching trips traditionally began in April, whether in Canada or abroad. During May, Doris preferred to be at FP to catch the re-awakening of her surroundings, the garden, her veg. patch, the apple trees she had planted, blossoming, and the ever changing light on her pond.

Before heading up to the Georgian Bay studio in July and August, most years she travelled to the Arctic, at the time when the ice was beginning to melt and the water opening up just a bit around the icebergs and floes allowing for the reflected light and fractured colours that Doris could capture so well. Pangnirtung Fiord with Floes (above) is one of the brilliant and rare works completed on her second trip in 1973 – a revelatory view down the Fiord! 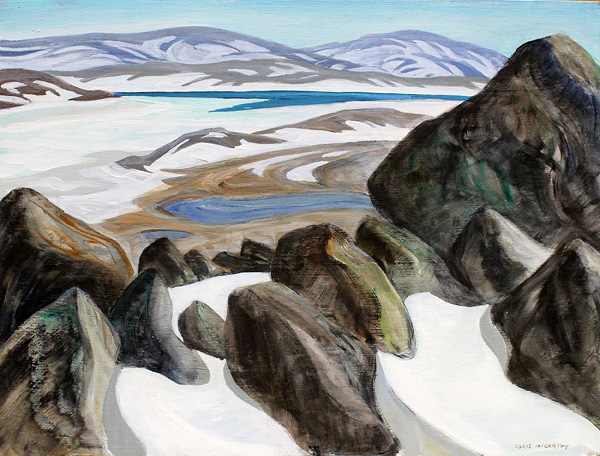 On the same trip, centred with friends in Frobisher Bay, she painted this “monumental” work (above), rocks bursting out of the frame loaded with quick colour strokes and highlighted by the abstract drifts of white snow in the foreground. Then the swirl of open water, brilliant blues beyond and the striations of snow on the mountains, blue sky above the distant view framed by the urgency of the boulders!

Long before Doris was able to travel to the Arctic, she spent many a happy and fruitful time painting in Newfoundland. In the early years she travelled on board one of the supply boats that frequented the outports and villages and, at the time, were the only way to reach some of the more isolated places and some of her favourite subjects. Doris continued to visit Newfoundland throughout her career.

In this bucolic and rare watercolour, from June 1983, she captured a brief calm moment: the sheep grazing lazily, moving up the fresh grass towards the sparkling white church surrounded by brightly coloured houses and sheds, the stillness of the protected harbour, the stilt-legged shed, fish drying on the racks in the sun up the hill, rocky outcrops and tufted trees testifying to the rougher and stormier times.

Doris McCarthy, 1910-2010, studied at the Ontario College of Art having won a full scholarship, awarded to her by Group of Seven member, Arthur Lismer, in 1926.

McCarthy was the recipient of the Order of Canada and the Order of Ontario, as well as numerous fellowships and honorary doctorates from institutions across Canada, including the University of Toronto and the Ontario College of Art and Design. She was also named the first Artist of Honour by the McMichael Canadian Collection. McCarthy wrote a two-part autobiography: A Fool in Paradise and The Good Wine, with two subsequent books, My Life, an abridged version of her autobiographies written with Charis Wahl and Ninety Years Wise. Three major retrospective catalogues, Celebrating Life, The McMichael Canadian Art Collection, Doris McCarthy: Everything Which Is Yes and Roughing It in the Bush, published by the Doris McCarthy Gallery, University of Toronto, Scarborough.

Her work has been widely exhibited and collected, joining the Wynick/Tuck Gallery in 1979. Among the numerous private and public collections across Canada and abroad are the National Gallery of Canada, the Art Gallery of Ontario, the McMichael Canadian Art Collection, the Glenbow Museum, Calgary, the London Regional Art Gallery, the High Court of Australia, Canberra; The Royal Collection, Windsor Castle; and the Doris McCarthy Gallery, University of Toronto, Scarborough, where her archives are also housed. 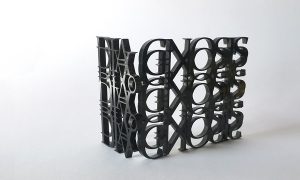