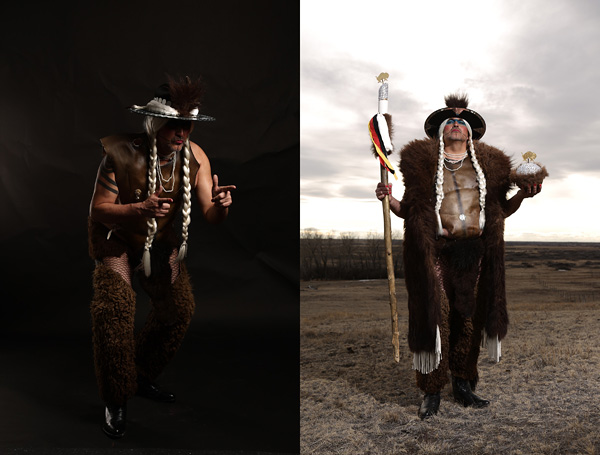 SASKATOON, CANADA — On April 2, Remai Modern opens Maanipokaa’iini, the first-ever survey of the work of Siksika Nation artist Adrian Stimson. Across installation, painting, photography, video and live performance, Stimson considers Two-Spirit identity, the centrality of the bison to Blackfoot spirituality and survival, and the intergenerational impacts of the residential school system.

Maanipokaa’iini means newborn bison in Siksikáí’powahsin, the Blackfoot language. It was chosen as the title of the exhibition following the birth of a bison late in the season in September 2021, when Stimson was an artist-in-residence at Wanuskewin Galleries. The new calf is part of the second generation born on that land since the almost total extermination of the Buffalo Nation in the 19th century, highlighting maanipokaa’iini as a powerful symbol of resilience, renewal and futurity.

Hailing from Siksika First Nation, Stimson first trained as a painter before expanding into performance, photography, video, installation, printmaking and public art. Across these diverse media, Stimson’s work draws on his lived experience as a Two-Spirit Blackfoot person and survivor of the residential day school system.

Stimson studied, taught and lived in Saskatoon from 2004 before returning to his home in Siksika in 2017. He is well known locally and increasingly internationally for his performance persona Buffalo Boy and her alter-ego, the Shaman Exterminator. This gender bending, shapeshifting trickster re-stages familiar tropes of the Wild West using humour, drag and theatrical camp aesthetics. In doing so, Stimson simultaneously mourns and re-signifies the history of Indigenous-settler relations on the Great Plains.

The connecting thread of the exhibition is Iini (bison), which Stimson employs to represent the violence of colonial westward expansion while also grounding his practice in the culture- and life-sustaining relationship Indigenous communities have with this revered kin.

The museum will host an opening event for Maanipokaa’iini on Friday, April 1 from 6 to 9 PM, including a performance by Stimson called New Born Buffalo Boy.

Maanipokaa’iini is presented by TD Bank Group. The exhibition is on view in Remai Modern’s Collection Galleries until September 5.

Adrian Stimson (b. 1964) is a member of the Siksika (Blackfoot) Nation in southern Alberta. Across installation, painting, photography, video and performance, Stimson’s works re-signify colonial history using both humour and counter-memory.

Stimson has exhibited widely across Canada and internationally. He has a BFA with distinction from the Alberta College of Art and Design and an MFA from the University of Saskatchewan. Stimson received the Governor General’s Award for Visual and Media Arts in 2018 and a REVEAL Indigenous Arts Award from the Hnatyshyn Foundation in 2017. He was also awarded the Blackfoot Visual Arts Award in 2009, the Alberta Centennial Medal in 2005 and the Queen Elizabeth II Golden Jubilee Medal in 2003. His work is held in public and private collections including The British Museum, London, Campbelltown Arts Centre, Montreal Museum of Fine Arts, Art Gallery of Ontario, Toronto, MacKenzie Art Gallery, Regina, and Remai Modern, Saskatoon, among others.