Wild at the Textile Museum of Canada, Toronto

Wilderness is no home for art, yet art craves the wild. Artists covet the freeform spontaneity of nature; they try to capture it, but in doing so, lock it up, render it inert, and kill it. All that is left to display in the gallery are the remains. It’s a high-stakes balancing act to take that which is out of control, undomesticated, unknown, and somehow replicate it in a strictly moderated environment. Great artists manage to maintain the giddy vertigo we experience when all that is ordered drops out from beneath your feet even within the confines of the white cube. There are even some people (artists included) who think the natural world is a place of divine harmony, that humans bring chaos in our fall from grace from the garden. But most of us know, as Werner Herzog said in Grizzly Man, “the common denominator in the universe is not harmony, but chaos, hostility, and murder.” Which is just to say, it’s beyond us. 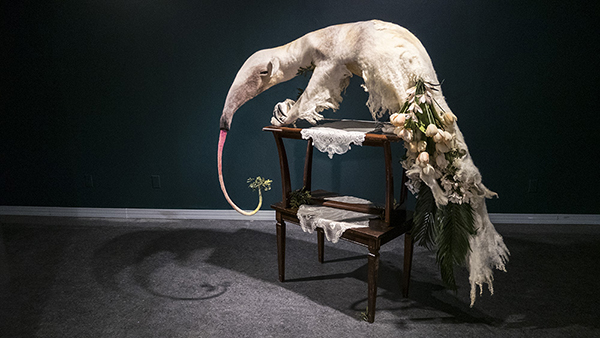 The five artists that curator Farah Yusuf has gathered together for Wild at the Textile Museum of Canada draw on this tension to open up the space of the gallery and offer a glimpse of what lies beyond. Some, like Emily Jan and Carrie Allison, show what happens when the line between these spaces are blurred. Jan references the culture of museological display in her large-scale diorama of exotic creatures, but these strange beasts have been mutated further into plant-animal hybrids that would not be out of place in a Jeff VanderMeer story. Allison reverses this tactic by incorporating actual specimens of plant life from botanical collection at the Nova Scotia Museum. Carefully taped down, dried up, and catalogued, these former grasses are paired with subtle beaded reproductions that hint at the possibility of a different type of knowledge based in Indigenous culture that resists Western scientific categorization. Catherine Blackburn also addresses Indigenous experience with her array of hanging traps holding beaded and bloodied rabbit hides, but the balance between animal and human is emphasized in the care given to former’s remains. A traditional, sustainable relationship with nature inspired by stories of the artist’s Denesuline grandparents is explained in the wall text to be the inspiration for this work. 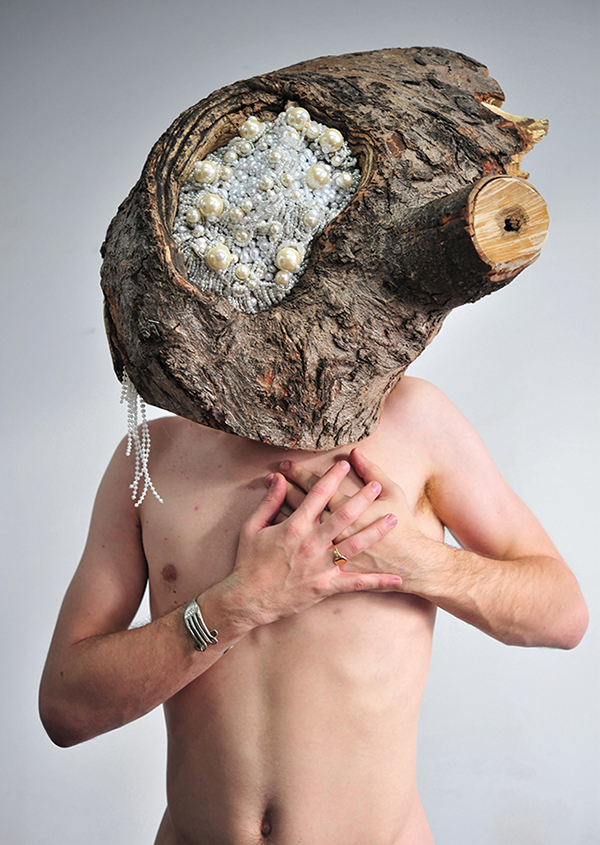 An internalized wildness associated with being marginalized or different from the norm is played out in the costuming of Humboldt Magnussen and Omar Badrin. Both use masks to empower a sense of alienation from the dominant and dominating culture, inverting expectations of identity by going wild with materials. Magnussen’s headgear covers the face with decorative assemblages of beads, mirrors and glass designed to subvert standards of masculinity and introduce a queer aesthetic into self-representation. He performs this resistance in photos that place him in a local natural setting (a nudist beach) that plays on the implications of being a naturist.

Badrin’s use of black light, strobing effects, and neon fabrics put him at odds with the rest of the artists in this exhibition because he shifts the emphasis from the outside world to an internalized rejection of social order that manifests itself in electrified outfits that delve directly into the brain. His experience growing up in Newfoundland with his adoptive family after being born in Kuala Lumpur informs his sense of being at odds with a homogenous community. And not since the Rhode Island artist collective Forcefield exhibited their head-to-toe stage costumes has crocheting been used to such radical ends in a gallery setting.

Badrin’s luminescent lighting and assaultive video display create the strongest sense of what wild is by being most aggressive with the interior environment, but the more conventional displays of the other artists work in contrast with varying degrees of intensity to convey their intents and carry the curatorial theme. The exhibition as a whole makes for a wide-ranging evocation of art that takes us to the edge and gives us a glimpse of what lies over it.

Wild continues until March 15.
The Textile Museum of Canada: http://www.textilemuseum.ca/home
The gallery is accessible.