In Sackville, New Brunswick, you are as likely to hear a retired farmer talking about a recent art happening or music festival shenanigan as you are a twenty-something hipster. That’s because for decades Struts Gallery and the Owens Art Gallery have been fostering local artists as well as showcasing international artists. When I was a teen in the 1980s, seeing art at both of these galleries was a life changer. It made the “art life” seem possible even when everything around me made it look impossible. They also created an environment where events like SappyFest, a scrappy little music and arts festival, could open up the town to all kinds of unusual performances. What goes on at these events isn’t lost on the locals (not much is), but it also wasn’t at the top of anyone’s mind when the pandemic hit. Like the rest of the world, Struts and the Owens had to scramble to adjust and were forced to evaluate their relevance in a time of crisis.

With Umbrella Projects, the galleries decided to combine their resources and open up a call for safe, offsite, alternative projects including curb-side video programming, banners, books, and more. Owen’s Director Emily Falvey explains that the name seems particularly poignant as Sackville is so windy no one can use an umbrella. Nonetheless, the project threw a life line to local artists, kept a cultural connection to the outside world, and gave locals something to talk about over Zoom. Was this vital, important, or life changing? Only time will tell.

John Haney’s neon Umbrella Projects piece HOT TIPS is currently flashing its red and white glow in front of the Owens. The phrase “HOT TIPS ON HOW NOT TO BE BOTHERED” flickers as if advertising a seedy motel or theatre. The first and last word blink on and off in red, bookending the phrase “TIPS ON HOW NOT TO BE” glowing in bright white. Haney began his practice in photography and, similar to a found image, this is a found phrase. It was an off-hand remark about going to therapy that resonated with the artist. “HOT” and “BOTHERED” remind us we’ve all been a bit irrational to some degree this past year. “TIPS ON HOW NOT TO BE” is apropos as it speaks to the varying degrees of isolation we have all been experiencing. When the full sentence comes together, it merges the retro medium of neon advertising with the language and attitude of self-help infographics that have inundated us lately on social media. In some ways the work marks a return to the outer world and a departure from our screen lives only to reveal a continuous preoccupation with self reflection. At a time when many artists have had to reevaluate how they make a living, Haney was given a chance to move into a new media and begin what looks like a totally new direction. For all who participated, Umbrella Projects gave access to an audience and a budget, which is so desperately needed by artists in rural areas and was especially absent during COVID. 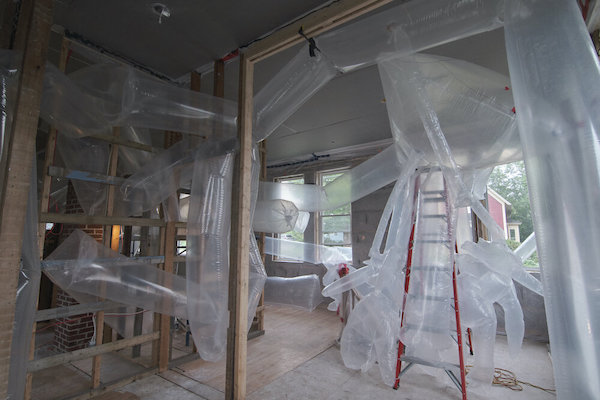 Falvey explained to me that the Owens is always trying to walk a line between supporting local artists and bringing in artists from outside the region in an attempt to foster a dialogue between the Sackville art scene and the national scene. Ideally it’s a symbiotic relationship where each nurtures the other. Corner Brook, Newfoundland, artist Marcia Huyer’s installation Breathing Room is a perfect example of that process at work. The location for the piece came about from conversations with locals during a previous residency at Struts Gallery that led to Robin Walker’s family hosting the installation at their home as it was undergoing extensive renovations. You can see here exactly how art has become a part of the fabric of the town. Huyer’s immersive installation of inflated plastic tubes that ran through the house seemed to breathe and explore the empty rooms, making the house feel alive in some strange alien way. The tubes tested a variety of boundaries between surfaces and atmospheric tensions that brought to mind the many ways we divide and segment our lives politically, physically, and personally. It was especially on point given the border restrictions for entering New Brunswick at the time. Walker said she didn’t realize how much her family missed these types of events and that at least one hundred people came through her home (following well-monitored COVID protocols), but she admits some of them just wanted a peek inside the house to eye the renovations. That’s art in a small town: conversations, curiosity, and a mix of the unexpected and the everyday opens a door to an unsuspecting audience and a new experience.

The other Umbrella Projects, including Yvonne Singer‘s banners, fascinating books by Nic Wilson and Derek Sullivan, and others, also speak of an interaction between audience, media, and maker. In a small town everyone cooperates and collaborates; the line between audience and artist is often blurred. That’s how it was with the first Umbrella Project, which Falvey describes as “magical.” It was a video screening entitled Sweetest Sympathy (dedicated to a local venue that closed due to COVID) and was part of last year’s outdoor SappyFest Cube Show that consisted of a series of performances and videos projected onto a local industrial building.

This year, although not directly involved with Umbrella Projects but certainly in the same spirit, SappyFest is featuring three performance artists along with live music and many other oddities in a cable access inspired online event entitled SappyFest: Infinite Variety. Amy Siegel (Peterborough by way of Toronto and Sackville) is performing a piece that is a response to one of those videos screened last year. It’s a live cover/re-performance of Colin Campbell’s 1972 classic Sackville, I’m Yours. Siegel’s work continues a thread of dialogue connecting the evolution of video art, online performance, multiple generations, changing art practices, evolving media, and geographical distances. Artist Florence Yee (Montreal/Toronto) is making a contribution to broaden that dialogue as it takes inspiration from the work of Yoko Ono. Yee describes the performance as “an interrupted reading of Yoko Ono’s Grapefruit.” Half of the texts are Ono’s original work and the other half are texts inspired by Ono’s instructional performances. The conversation between artists, ideas, and even time that seems likely to take place with Yee and Siegel’s performances is all the more interesting for being broadcast from the unlikely rural epicentre of Sackville.

Thinking of Falvey’s description of last year’s event as “magical” leads me to imagine that something supernatural is happening with these boundary blurring conversations. Which brings me to the third performance artist to watch for.  “I am planning a cable access inspired, late night show called Super Duper Natural,” says Fredericton-based artist Rebecca Blankert. “I will talk about the latest in supernatural phenomenon, read our letters to the show (these are real letters and stories I’ve received), and talk about some of my tips and tricks for protecting yourself from abduction and encounters and also, how to encourage it, if that is your intention.” There is definitely something about this sleepy little town that makes me think it might be first on the list for alien abductions. But in reality, Struts and the Owens simply started a dialogue years ago that flashes bright like Haney’s neon and morphs, changes, and expands like Huyer’s Breathing Room, creating a perfect environment for things like Umbrella Projects and SappyFest to happen. Let’s hope the conversation between locals and artists near and far never ends.

Jon Claytor is an artist living and working in Sackville, New Brunswick.