While OG Biennials like Venice (more on that below) and the Whitney (which is also happening right now) have been kicking around for almost a century or more, the boom in biannual art extravaganzas happened in the latter part of the 20th Century with them popping up everywhere from Alberta to Vladivostok. The defining character of these more recent editions seemed to be the inclusion of one or more of a coterie of contemporary artists whose work had a scale and impact tailormade for an international audience of inured art tourists looking for the next spectacle. Toronto was late to the game with its first go-around only happening in 2019 and its second, having already screwed up the calendar because of Covid, happening now. The art stars of the past have dimmed as the borders of what constitutes the art world have been stretched outward and inward, and the gravitational city centres have lost their hold. The reasons are both economic and cultural, but it’s enough to note that plenty has changed since pre-Y2K (hell, plenty has changed since 2019, but that’s another story) and our local celebration has emerged in a world with a different sense of purpose.

The globe-trotting days of yore with their concomitant cosmopolitan artworks have been replaced with a reinvigorated emphasis on place and history. With its overarching title, What Water Knows, The Land Remembers, the Toronto Biennial anchors itself in geography and provides a deep dive into the material, biological, and human past. This is most evident in the drawings of Bogotá-based artist Abel Rodríguez, who makes a return appearance after also being included in the 2019 Biennial. The specificity of his knowledge of Amazonian plant life is rooted (pun intended) in his experience as an Indigenous Elder, but also marked by his time in a residential school and inescapably caught up with the history of South American colonization. 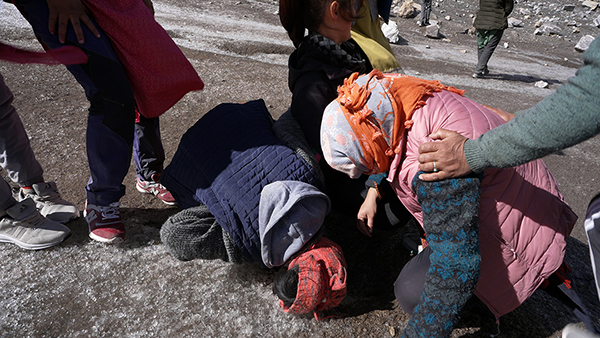 Another returning artist, Susan Schuppli, covers more ground in her wide-ranging investigation of the material circumstances of glacial ice in the time of climate change, but is so localized in the immediacy of perception – you watch her and her collaborators kneeling down to hear the sounds of snowmelt runoff or paddle out in frigid lakes to set microphones – that the details of her research make the world present as an elemental fact. Alongside Schuppli’s documentation is an installation by Ts̱ēmā Igharas and Erin Siddall that takes crystals from a former uranium mine near Great Bear Lake into the gallery space to expose viewers to the literal and metaphoric dangers imbued in the radioactive substance. 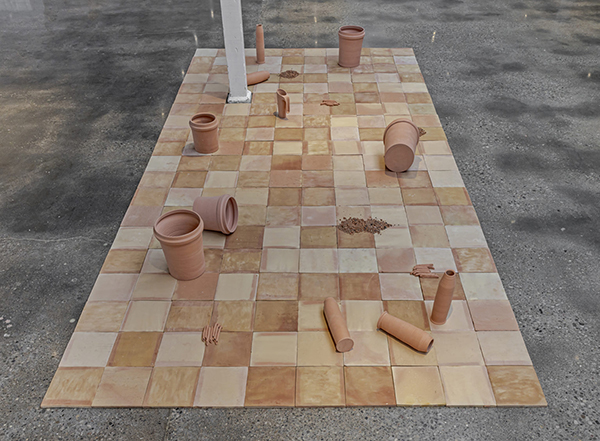 Further references to radioactivity and the land we occupy can be found in Dana Prieto’s installation of terracotta tiles and containers at the Small Arms Inspection Building. Since 1992, when the Toronto Region Conservation Authority took possession of this site of a former munitions factory, over 70 000 tonnes of contaminated soil have been removed. Prieto’s fragile fragment of floor acts as a synecdoche for the local geography as well as a metaphor for the planet as a whole. Bound up within the empirical evidence of all of the works on display is an implicit ethic about our relationship to the land. Where we stand is one aspect of that, but how we move is another. Denyse Thomasos’ almost abstract charcoal on paper drawings reference mass movements of people – in particular, the forced relocation of enslaved populations – as a reminder of how even human beings are treated like things and exploited as resources under global capitalism. 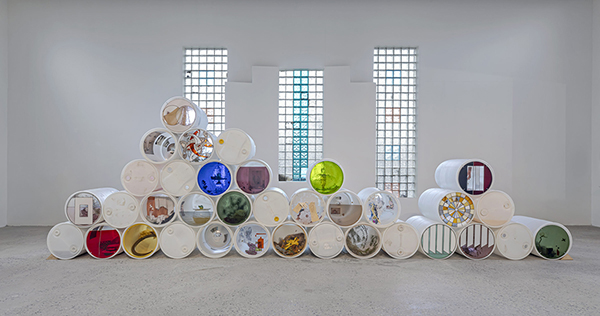 Migration is the touchstone for Nadia Belerique’s installation of cargo barrels repurposed as shipping containers for immigrant families to send goods back home and then repurposed by the artist as a modular diorama of those personal artifacts set into motion. It’s the centrepiece of the most cohesive exhibition site of the biennial as well the loveliest exhibition space (made all the more precious knowing it will likely be replaced by townhouses before another two years passes by). Raised on the stage of this former church and backlit by the setting sun, Belerique’s piece is paired with Paul Pfeiffer’s disassembled statue of the young Christ modelled on Justin Beiber (which still ties into the theme of land and occupation if you give it a chance). Just outside is a public work by Ghazaleh Avarzamani that transubstantiates blue rubber mulch into a zone for artistic, if not spiritual, reflection.

This is only a small selection of what’s on view at the Biennial’s main spaces and doesn’t include satellite sites with individual works and ongoing public programmes that culminate in Judy Chicago’s huge smoke sculpture to be created on a barge in the city’s inner harbour on June 4. Over in Venice, Stan Douglas is showing at the Canada pavilion and his work has long provided a model for visual artists engaged in documenting and critiquing moments in history tied to particular geographies that resonate in the present and demand an ethical response from the viewer. For those of us who won’t make it there, our hometown Biennial provides more than enough to dwell on.