After having been closed for two years for reconstruction and renovation, Galerie SAW Gallery is open again with a strengthened presence and a bracing new show. Curated by Jason St. Laurent, Sex Life: Homoeroticism in Drawing delivers on its promise not to shock or titillate (although the potential for that is abundant), but rather to foster an expanded view of human desire and sexual practices. This is suggested by the use of a wallpaper design by Cindy Baker titled Crash Pad Toile that envelops viewers as they enter the newly configured gallery spaces now on the second level at Arts Court.  Inside the gallery, a series of watercolours by Baker depicts intimate domestic scenes of variously-abled women in various states of undress, with assorted piles of laundry, potted plants, and accompanying cats. These scenes are reproduced in the blue toile pattern that continues from the entrance and forms a backdrop for the watercolours, casually underscoring the politics at play in the bedrooms of the nation. Although there is provocation here, sexuality is presented in a cheeky and cheerful manner. The tone of the exhibition is maintained through a cartoony aesthetic and the ribald sense of humor that predominates. 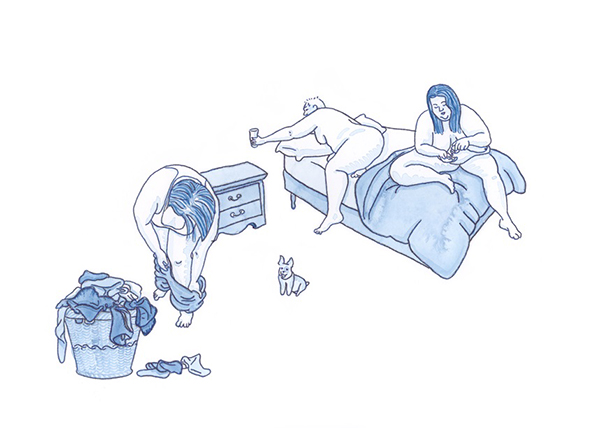 Other artists in the show – and featured in a special issue of HB magazine that serves as an exhibition catalogue – include Panos Balomenos, Dave Cooper, G.B. Jones, Sholem Krishtalka, Zachari Logan, Kent Monkman, Diane Obomsawin, and Mia Sandhu. However, in the central section of the first gallery they are joined by a host of even more artists in a series of vitrines that contain additional works – mainly publications such as graphic novels, bandes dessinées, manga, underground comix, and zines. The inclusion of these materials situates the work in the show within a global community. A key figure here is the artist G.B. Jones who is well represented with original drawings as well as photocopied copies of the pioneering eighties zine J.D.s, a Molotov cocktail of punk rock and same-sex desire that antagonized both punks and queers. Jones, along with co-producer Bruce La Bruce, has been credited with spawning the international “queercore” movement by simply asserting in the pages of the zine that it existed. Sex Life imagines a community representing sexual freedom explicitly in contrast to the rise of right-wing conservatism worldwide. 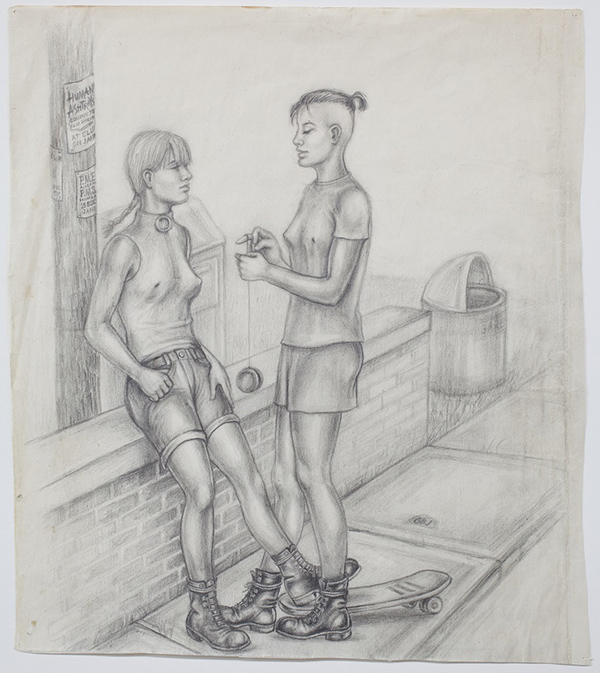 An adjacent gallery features a new installation of work by Sholem Krishtalka that provides a centerpiece for the exhibition. He has called The Faggots & Their Friends Between Revolutions (2017-2019) a bootleg illuminated manuscript accompanied by various candid images of individual or groups of men. The source material for the work is a queer utopian text written by Larry Mitchell that was first published in 1977 and out of print until this year. Part fable and part manifesto, it makes a mythological scripture out of the strategies employed by queer communities for their survival. Analogous to the inclusive message that is now posted at the entrance to the expanded Club SAW (an events space and café/bar), with this exhibition the gallery positions itself as not only a refuge but also a site of resistance and a broadcast centre.