Language and found imagery play a salient role in shaping the themes in the exhibition Mehmoon by Winnipeg artist, writer, and educator Reza Rezaï. By parsing and piecing it together, the viewer is able to build a narrative of truth and understanding concerning events in Iranian history over the last forty years. The work is subtle and demands engagement, so you can’t be a tourist to this exhibition. It demands you read, bend down, stand up, and literally look around to find answers to your questions. 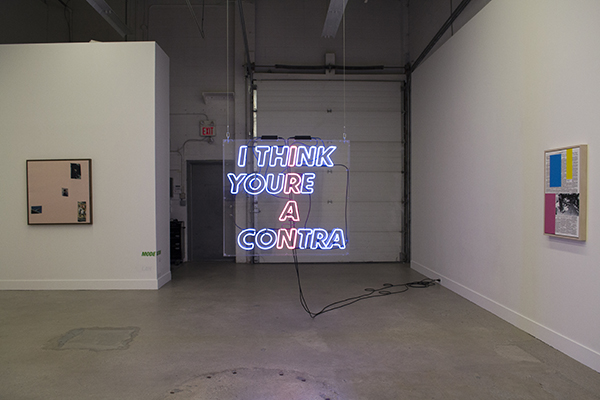 The works are bold: Boys Don’t Cry and Contra refer through text and image to the Iran-Contra affair. KIDS, an inkjet print on silk charmeuse, hangs in front of O.T.U., a nearly imperceptible hidden text that reads “one time use” to suggest the disposability of child soldiers in the various wars that have ravaged the Middle East.

By using written language, Rezaï metaphorically and literally weaves a narrative. Language is a universal tool for communication and here information is presented on a part of the world with which Westerners may or may not be familiar. Bringing the English language into the gallery space speaks to accessibility for English-speaking viewers as well as the influence the Western world has had in the Middle East. Obliterating some text with colour blocks as in Turquoise Palace obscures information while asking whether we are fully informed on the matter at hand. Near the exit of the gallery, Hellena, a black and white image of a figure in a head scarf seen from behind, signals a moment of repose for contemplation before leaving the space.

Iran’s complex history with the Western world is highlighted in this exhibition. As asmaa al-issa cites in her accompanying essay Can we make ourselves light enough (to levitate)?, “As viewers, we have a responsibility to engage with the weight we are given.” Mehmoon and Rezaï demand a critical takeaway for viewers to reevaluate their understanding of the dynamics of Iran.