Pamila Matharu at A Space, Toronto

Longtime Toronto artist, educator, and activist Pamila Matharu’s first solo exhibition opened on a Friday evening back in March. I arrived at A Space early, greeted by a table of cheese, crackers, and strawberries, plus a few people ambling throughout the gallery’s two rooms. I hardly ever attend opening receptions for shows I plan to review, but this one was different. As Matharu writes in her artist statement, this exhibition “explores the politics of archives” and interrogates how we (BIPOC) artists and makers survive within and in spite of exclusionary archival practices. So I had to show up to witness not only the archive on the walls, but also the community I know this sort of work would conjure. 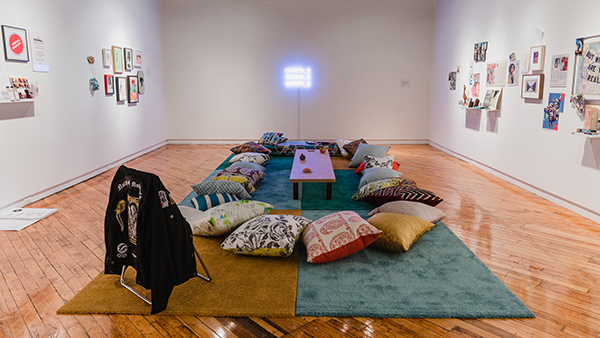 Pamila Matharu, One of These Things is Not Like the Other, 2019, installation view

One of These Things is Not Like the Other is a purposefully dense and difficult show to write about. Every inch of A Space’s relatively compact galleries are packed with work – on the walls, on the floor, in corners, and in the middle of the room. On opening night, I twisted my body and shuffled politely as I tried get a closer look at the work and make space for others to get by. I crouched down to read patches embroidered on jackets and squinted to read glossy reproductions of text messages. As I made my way around the exhibition, I occasionally turned towards the centre, trying to consume another stanza or so of the poem etched into a table as part of the baithak (Panjabi/Urdu/Hindi word for lounge).

These works that I have described, yet not described at all, are ephemera, personal objects, ceramics, prints, and photographs from Matharu’s decolonial art collection, organized into six constellations (which Matharu has designated a shraddhanjali – the Panjabi word for homage) in addition to the baithak, which is a collaboration between Matharu and the feminist art collective Sister Co-Resister. Together, this collection of hundreds of items spanning Matharu’s professional and personal life (and beyond) is titled Dear Amrita: How can I forget history when I was just starting to remember? It is addressed to Amrita Sher-Gil, the late Hungarian-Indian painter who died suspiciously in 1941 on the eve of her first major solo exhibition (an experimental text by Sajdeep Soomal narrates Sher-Gil’s story and accompanies the exhibition). 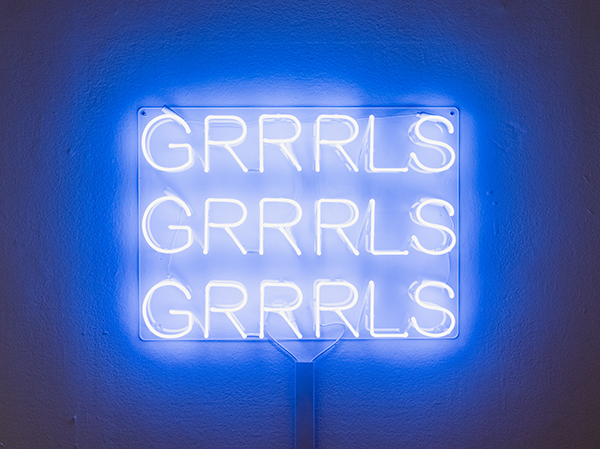 Pamila Matharu, Invited To The Party, But Never Asked To Dance, 2019, neon

In a second smaller and darker room, a mixed media installation titled Vergangenheitsbewältigung presents archival footage from the now defunct AGO series Perspectives 93 – footage which Matharu recovered from a donations bin of an art supply centre. The thirty-nine-minute video work, stuck between an archive and aesthetic, features the voice of Panjabi/Spanish-Filipina writer and educator Lakshmi Gill and is spliced together with “a collage of social/cultural moments outside the museum on the streets and on television.” Matharu juxtaposes the video with criticism and essays on the event by John Bentley Mays and Clive Robertson – both of which Matharu found safe and sound in the AGO’s archive.

What is most striking about One of These Things is Not Like the Other, as I’ve already mentioned, is its presence, which at once overwhelms and comforts the viewer who is so fortunate to see themselves reflected in various parts of the work. Certainly this is a shraddhanjali to BIPOC artists (and non-artists) everywhere. Looking around the room, there are many objects and images of and by people who we will likely never see in this gallery context again; those who institutional archives care nothing for and who the burden of remembering will continue to be carried by Matharu, and others like her, alone. Will things change? I sure hope so.

Pamila Matharu + Sister Co-Resister: One of These Things is Not Like the Other continues until April 20.
A Space Gallery : https://www.aspacegallery.org/
The gallery is accessible.