I was hoping to borrow Marshall McLuhan’s distinction between hot and cool media as a means to structure my analysis of the current exhibitions at The Power Plant, but I double-checked his dichotomy and it didn’t fit what I wanted to say so I’m ditching the original Eminem’s lingo and proposing something of my own to navigate this pairing of Canadian-Guatemalan artist Naufus Ramírez-Figueroa and Eritrean-born, Canadian-raised artist Dawit L. Petros. Their exhibitions are officially solo, but having them each across the hall from the other provides the perfect opportunity to compare and contrast their divergent paths through the realm of postcolonial content in the time of neoconceptual strategies. Both are at home in a place like The Power Plant, which has long played host to those art practices that are deemed “contemporary” not so much because they are current, but because they fulfill the expectations of a particular history of how art is to be made and how it looks. 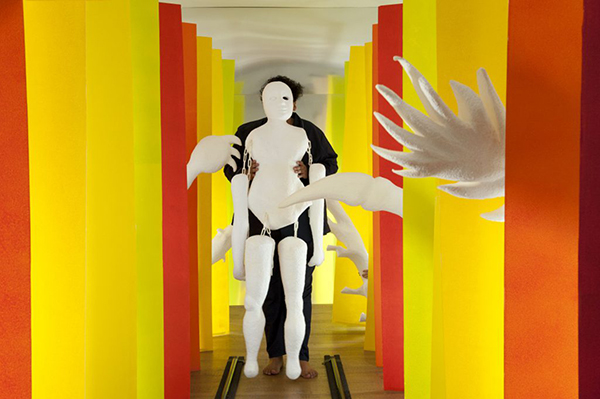 Ramirez-Figueroa delves deep into historical traumas tied specifically to the civil war in Guatemala that directly impacted his family history and brought him to Vancouver. His method for doing so is predominantly performative and the gallery is stocked with half-a-dozen videos documenting performances that feature the artist and collaborators engaged in isolated actions. Some, like Feather Piece and Mimesis of Mimesis are clearly reminiscent of traditions of performance art that rely on physical pain or endurance. Others, like Corazón del espantapájaros [Heart of the Scarecrow], are more theatrical but still foreground the creative process and the artist’s hand. Even the accompanying sculptural pieces are embodied in some way: giant wooden legs are suspended from the ceiling by chains, glass baby legs are scattered in a planter, and a huge glowing finger hangs amongst shards of colourful stones in a black-lit chamber. This latter work is linked, if you can believe it, along with a series of monochrome paintings, to a conspiracy theory concerning covert government manipulation by reptilian beings.

If there is an overarching aesthetic to Ramírez-Figueroa’s work, it’s one that laughs as much as it cries. He turns the absurdity of painting a living person head-to-toe in blue paint into an elegy for the death of his uncle, a student activist whose body was found outside a military base near his university. He has children help him recreate a nightmare and then gets them to smash it to pieces. He dramatizes the ideology embedded in architecture by slam dancing with two partners until the buildings they wear as costumes fall apart and all three are left standing naked in front of marimba ensembled that keeps playing on. The defining elements is this art are messy, fleshy, and raw. 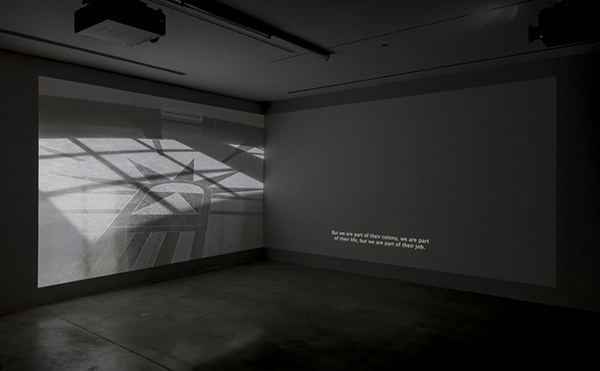 There is no laughter across the hall in Petros’ exhibition and the aesthetic is cool, clean, and clinical. He’s working within the tradition of the photoconceptualism most closely associated with the city that Ramírez-Figueroa once called home. The colonial history that he’s examining here is that between Italy and East Africa (specifically Ethiopia and Eritrea). He uses strategies of appropriation to isolate mass media images and the spaces between the images to highlight the ways in which Modern aesthetics worked in concert with the colonial project. In addition to images of images, he turns his lens to barren landscapes and architecture, largely depopulating the visual field and again emptying out the once occupied spaces.

There is a restraint bordering on reticence here that stands in stark contrast to the abundance of Ramírez-Figueroa’s works. I’d be lying if I said that the latter’s brash presence as performer and artist didn’t make more of an impact on my senses than Petros’ overly cerebral treatments. I’ve often felt the minimizing tendency in some contemporary conceptual work leaves one with a less-is-less equation rather than the depths hoped for. The contrast between these two very different artists pushes me to that conclusion, though a video work that links Italian fascism to a Montreal community centre and had me thinking of video installations by Jane and Louise Wilson from twenty years ago held my attention and managed, through a combination of text and ghostly real estate footage, to expand my appreciation of the politics embedded in our architectural inheritances in the subtle but intense manner that I imagine Petros desires.

As an added layer to this reading of these exhibitions within the scope of contemporary art history, it’s worth mentioning the group exhibition Stretch that was on display at The Power Plant during the summer of 2003. Curated by Eugenio Valdés Figueroa, Keith Wallace and Xandra Eden, it, if my memory serves me well, gathered artists from the Americas who were engaged in a similar extension of conceptual strategies across a wider range of geography and politics than was generally exhibited. Individual outcomes were, not surprisingly, diverse, but if a link can be made to what’s on view now down by the lakeside, it’s that in addition to the contested territories of each artist’s home, there is also the occupation of the exhibition space that has its own history of exclusion and appropriation.