A fascinating question is raised when Miranda Bellamy and Amanda Fauteux collaborate with plants on their new installation Terrarium at the Owens Art Gallery. What will the plants reveal in this earnest effort to talk about how the organic world, colonialism, and capitalism fit (or more often don’t fit) together? However, like most true conundrums the search for an answer only creates more questions. 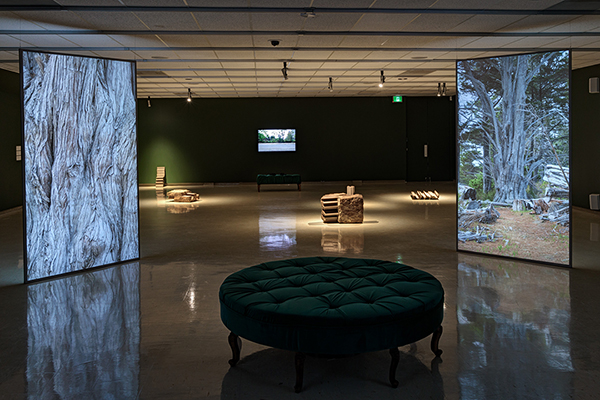 Walking into this installation is like walking into a dark, beautiful mystery. The show is laid out almost like a Victorian garden with everything perfectly placed for contemplation. The walls are a deep dark green, creating a forest-like embrace. Then there is an enigmatic soundscape of surreal tones that sounds both ancient and futuristic. Stone carvings appear like building ruins lit by spotlights in the first half of the gallery and a monitor hangs on the wall in front of a gorgeous green velvet couch. As we wind through the sculptures we move towards the centerpiece of the exhibition/garden. A circle of vertical, rectangular screens surround a round and opulent green velvet bench. On each screen a serene video montage of plants and architectural details is projected. It becomes clear that this is where the sound is coming from. But what is the connection between these ethereal tones and the plants? Perhaps another of the questions poised by this show is, “Once we decide to listen to plants, how do we choose to listen?” To understand this we need to understand the backstory.

Bellamy and Fauteux’s work came out of a visit the artists made to Kawau Island in Aotearoa New Zealand. It is a place that suffered an unwanted and destructive colonial takeover when Sir George Grey, a governor and naturalist, acquired it in 1860 to become a home for his international botanical menagerie. Plants were brought to the island using Wardian cases (best described as Victorian terrariums). Needless to say, the local plant life suffered greatly from this disruption. When Bellamy and Fauteux visited, they made video documentation of the plants that had survived the horticultural invasion. Their videos are projected on four screens to suggest a digital Wardian case. 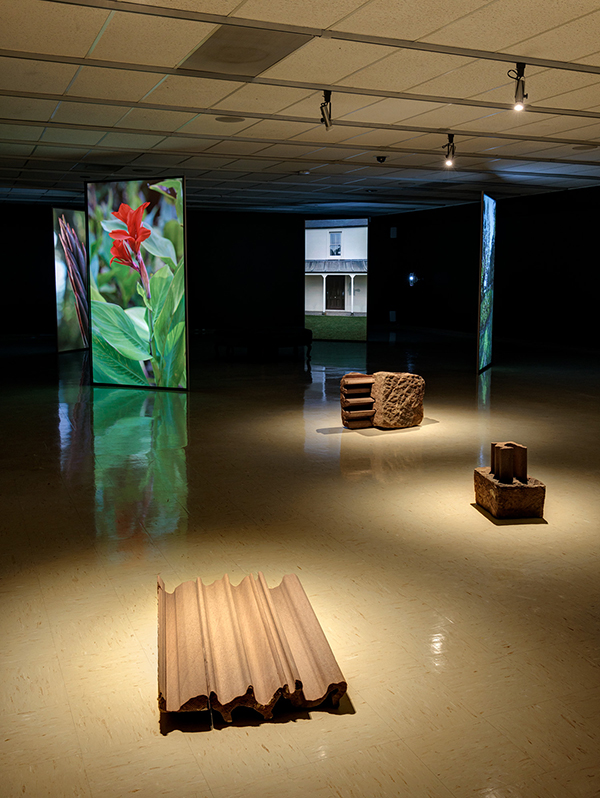 They also recorded the tiny changes in electrical conductivity produced by the plants. The electrical impulses of the plants have been transformed in a process called biodata sonification. This information is then assigned tones or instruments and presented as sound. Think of it as an audible graph of the data. The result is transcendent. The sounds and rhythms are unlike anything I’ve ever heard: organic, but also technological like I imagine an alien language would sound. Bellamy refers to this interaction with the plants as a collaboration. And the artists approach this collaboration with the same respect they would give a human collaborator. In this way they question the transactional nature of colonialism in so many of the world’s interactions. As stated in their bio, they aim to “queer the constructs that separate human beings from non-human beings and make space for the critical revision of human histories.”

The questions this exhibition raises invite a critique of colonial history and its impact on so much of the world today. Terrarium is beautiful, but with a darkness that cannot be shaken. Behind every visual element of the work is a history tied to colonialism and capitalism, and at the same time rooted in the organic world. These connections are deeply felt, if not overtly spelled out.

As I circumnavigated the screens at the center of the installation, my shadow cast itself upon each of the projections, obscuring the images with my silhouette. This made me implicit in the destructive disregard of nature as seen on Kawau Island under colonial rule. I felt deeply how my participation as a settler in a society that prides itself on scientific and technological investigations affected a certain image/reality of the world. Slowly I spiraled towards the center, finally sitting on the round bench. My focus shifted from my personal position in the gallery space to thoughts of the plants projected on the screens (now free of my shadow) and the mystical soundscape that these plants co-created with Bellamy and Fauteux. Then I noticed a quieter sound underneath the beauty of the biodata sonification: the wind blowing leaves and the real time audio of the recorded locations.

The layout of the exhibition allowed me to go on this small journey. To wander and in wandering arrive at a place I could really listen. And in listening to the plants, to get out of myself for an instant and become empathetic to the plants and their sounds. I was reminded of how Fauteux described her working process as “looking, listening, and learning.”

The first step in solving a puzzle is gathering the pieces together. How the image is put together depends on who is looking. It seems to me a big part of this work is in the point of view of the audience. Bellamy and Fauteux present an ever-shifting terrain where pieces of a puzzle appear, but it is up to us to put them together. It’s not as simple as it looks. If in the end we have a mystery without a clear answer, that’s to be expected. Terrarium is a visual poem, and a poem dies, as surely as a plant with too much water, when it is over-explained. Although we might not find the answers here, there is much to be gained in a quiet moment of deep reflection. Above all this exhibition seems to be an invitation to do just that.

Jon Claytor is an artist living and working in Sackville, New Brunswick.