A pulsing rhythm fills the space of Masha Kouznetsova’s hard ground / long road at Satellite Gallery, anchoring a raucous storm of sound emanating from a cassette recording. The cassette’s metallic feed, stretched between two tape recorders, releases dark, shiny dust upon the concrete base below it. Kouznetsova, both performer and monitor of the piece, says the resulting dust is like “sound on my hands.” 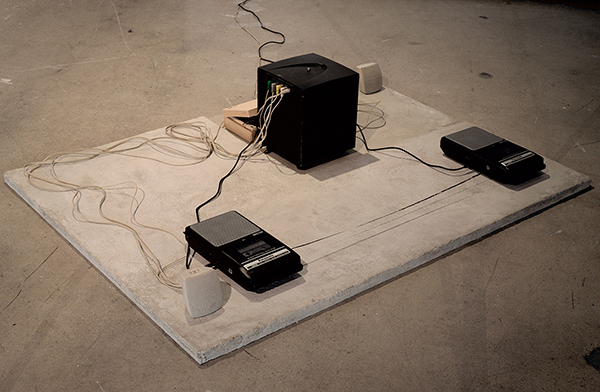 The piece, california road / bach cut-up, references recordings found and made during her drive from San Francisco to London, Ontario in 2021. Snippets of Bach and other sounds – including the artist’s voice – slip in and out of audibility, their coherence deteriorating each time the tape is played. For Kouznetsova, witnessing this deterioration relates to how accessing the changing nature of memory inevitably takes its toll, leaving real material effects through each re-encounter. Working in sound, drawing, pinhole photography, printmaking, and the chance effects of found materials, Kouznetsova attempts to invoke and embrace her changing relationship to memory and place both as scattered past and tangible, but temporary present. 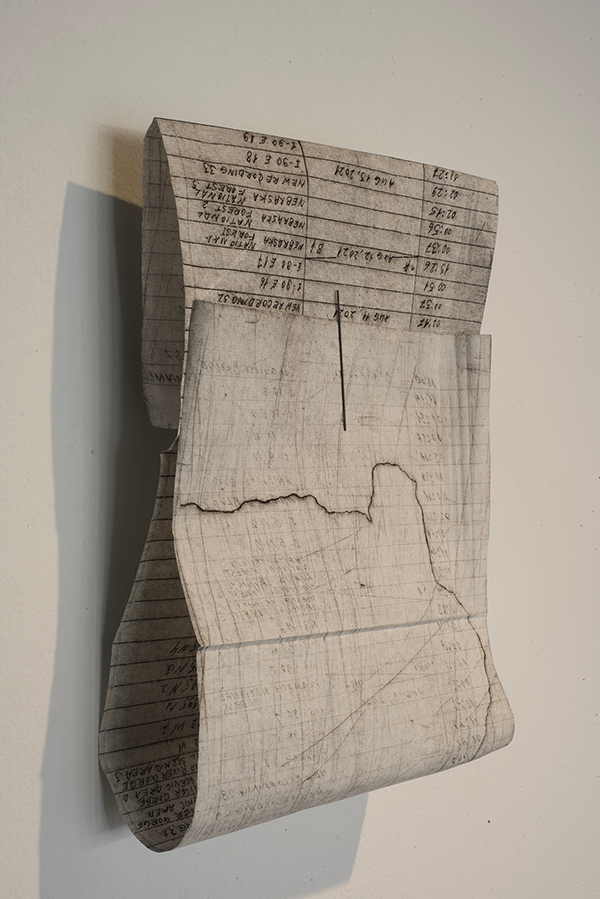 At the gallery entrance, a glimpse into Kouznetsova’s recorded “log” from her 2021 drive reveals notations and map-like marks referring to locations and recordings encountered. The log, a double-sided intaglio print of the original hand-written log, is presented in a way that is baffling and magical: the print, looped and deliberately obscured, appears anchored by the mere weight, rather than tip, of a pin. This optical trick further interrupts careful reading of the log, adding an otherworldly quality to its weathered map aesthetic. 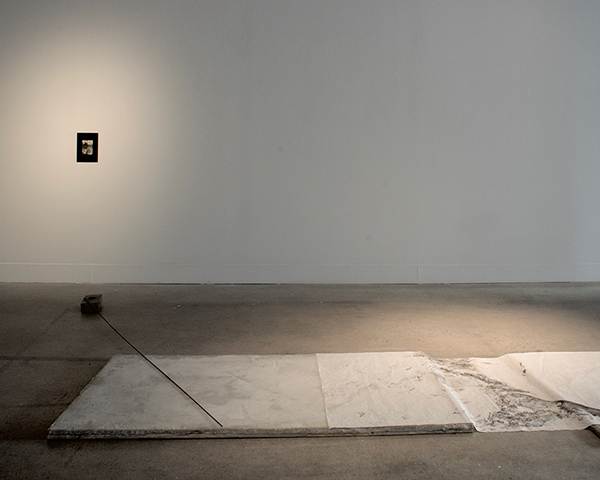 In the main space, a large abstract drawing – river / antenna, in reference to the artist’s repeated visits to London’s waterways – partially covers two shallow concrete plinths and part of the floor. The drawing (referencing land, water) and plinths (relating to the road and the studio), as well as a metal rod (both found element and tool/antenna for orientation) suspended between plinth and adjacent cast object, imply a zig-zag path through and beyond the boundaries of plinths and paper. This path – made of fluid marks, concrete edges, and dark line of metal – suggests how map-making cuts through land and water in both seen and unseen ways. place / radio / airwaves, the grey cast object anchoring the metal rod contains “radio parts” tuned into the faint texture of sound caught in between stations, referencing Kouznetsova’s search for a grounded “hereness” in white noise during her long drive. The cast radio points toward a pinhole photograph on the wall which is visually sliced in two, like a book. The photograph’s image is of a vague outdoor space in high-contrast fuzz. 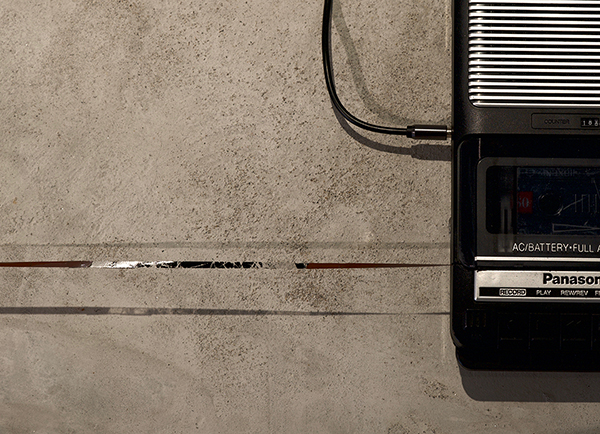 Beyond the floor drawing, the aforementioned california road / bach cut-up, consisting of two tape recorders, various speakers, cables and visible plugs, sits upon another shallow concrete plinth. When activated, a taut length of cassette tape, suspended between recorders, plays its spliced composition through recorder 1 and 2 simultaneously, visibly run ragged through each iteration. The tape is at turns pulled taut and slack, jerking and gently righting itself all the while. The sound (set at full volume) vibrates and sears through multiple layers, drowning distinct notes, voices, and rhythms inside its engine-like turbulence. 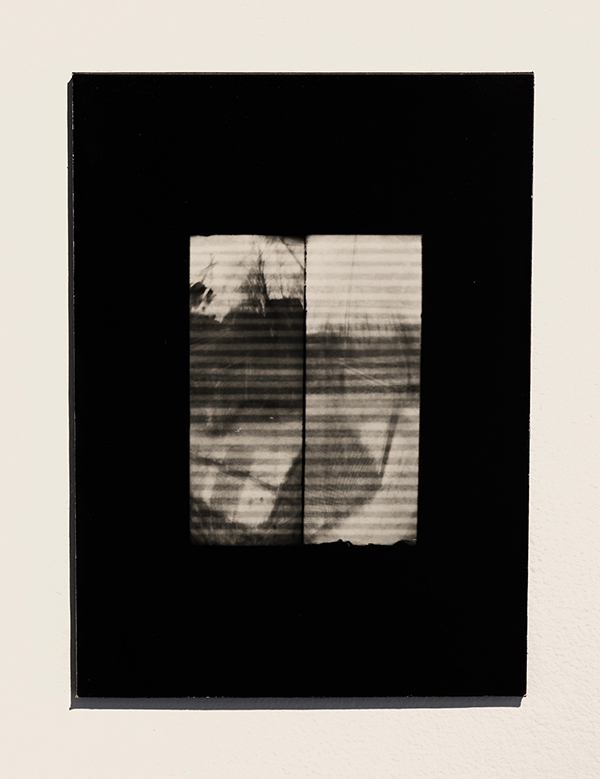 Mirroring the two tape recorders on left and right walls are two pinhole photographs, visually and physically cut so that only the left or right side is visible. The mind’s eye tries to connect them based on visual cues, but this hardly promises clarity; the images are again abstract and obscured. While this reference to doubling or twinning links to Kouznetsova’s bifurcations, splicing, and interruption of clarity in other works, the photographs feel less present than her multi-media works. While the twinned photographs are content to thwart optical recombination, the floor drawing and sound works employ gestures of re- and dis-orientation visually and spatially, which the artist relates to a nonlinear “stacking”, rather than a chronological or smooth experience of sound, material, past, and present. In a conversation with the artist, she expressed a deliberate push and pull between allowing visitors more points of access to the work while simultaneously wanting to interrupt this access. This vacillation of distance and proximity, particularly in reference to Kouznetsova’s shifting experience of place and search for groundedness, feels most powerful when sound works not only to interrupt visitors’ orientation but seems to reset one’s entire nervous system through its physical insistence.

As I searched for patterns and rhythms in Kouznetsova’s exhibition, I felt I also had to come to these works in context through their specific material logics, like poems referring to the world of their author, yet always themselves changed through each encounter. My sense is that Kouznetsova’s suggested method of re-orientation, while generously open to a repeated improv of pattern-making, refuses to ignore those “places uncomfortable and abrasive” that explode and occlude memory, that oscillate between knowing and not knowing, revealing tentative, yet somehow significant signs and directions to follow – that appear and disappear “like glitter on the concrete.”