Inside the doors of the AGYU’s double exhibition of works by American artist and designer Jae Jarrell and French filmmaker Caecilia Tripp, you’ll see a collection of press clippings, photos, and flyers in a vitrine. An ad for artist group AFRICOBRA’s first show in 1970 stands out. On it, headshots of the group’s “ten in search of a nation” (including Jarrell) float over bios, astrological signs, artist statements, and lists of included works. Titles like Black Jesus and Unite or Perish, and statements like “My work – me, Africa and the future” and “Positive images – images that will inspire Black people to a higher level of consciousness” announce the group’s mission. Echoing a better-known 1967 mural titled Wall of Respect and featuring honorific portraits of Aretha Franklin, Malcolm X, Muhammad Ali, and W.E.B. Dubois, among others, the AFRICOBRA poster visualizes African-American cultural history through its key figures. With nods to Martiniquan poet Edouard Glissant, American jazz musician Sun Ra, and Senegalese decolonial historian Cheikh Anta Diop, Tripp’s films shepherd this mostly American history into the era of globalization. The story remains predominantly affirmative and celebratory in her hands, but the calls for social justice that energize it now take a place alongside ever-angrier calls for environmental justice. 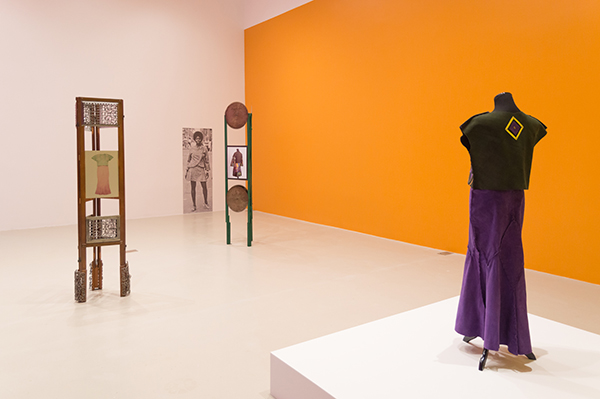 Moments from Jarrell’s career are highlighted in the first room. Debates about the relative merits of militancy, and messages of love and hope in clippings from the mainstream and Black press animate the mute image of a young Jarrell in her tweed Revolutionary Suit with its symbolically-charged bandolier. Voices collide in a vitrine. We hear the griping of a white critic for whom Jarrell and her peers’ works present a “coiled menace” in their exclusive address to “Africans only” alongside righteous protests against “frivolous” white appropriations of accessories like the bandolier. A Jet Magazine writer cheekily correlates the steady rise of white women’s hemlines and the advancement of the Black revolutionary cause. On the whole, the archival material provides a fascinating view into the polyphonic richness of the Civil Rights era and the central place of art, culture, and race within it. Against this background, Jarrell’s recent sculptures – ornamented Victorian screens fitted with images of her designs from over the years – stand closed-in on themselves, perhaps defensively, as monuments to an interior life that has endured the loud antagonisms of that era.

Moving into the darkened rooms for Tripp’s films, the interior life of the viewer is called to attention. If the debates of the 1960s and 70s were centered on the rights and visibility of racialized subjects, in Tripp’s alternately apocalyptic and aspirational works we are given a more sweeping view of the vulnerable place of humanity in the face of environmental disaster. As curator Emelie Chhangur succinctly puts it, Tripp encourages us to consider “how to live with (as opposed to on) the earth and its dynamic systems.” In Liquid Earth the ground is pictured as a glowing and unstable lattice-work around the Congo’s active super-volcano Nyiragongo. Clad in a silver steel worker’s suit and pictured in an abandoned Luxembourg factory, the dancer George Miekel Pieres Montiero embodies a persistent link between extractive European capitalism and resource-rich African sites like the Congo. As the ground gives way in this work, we gaze toward the stars in the next room with a glimmer of hope.

Aptly titled Even the Stars Look Lonesome, this immersive five-screen film installation combines footage of celestial bodies recorded at York University’s Observatory with slow moving, psychologically intense images of the dancer David Hamilton Thomson and the boxer Michael Olajide Jr. Fragments of Civil Rights history are brought to life in choreography drawn from the gestures of Malcolm X’s speeches and the fighting style of Muhammad Ali. These images are interpreted through equally powerful passages of spoken word poetry from Toronto-based Borelson and MC Za’kisha Brown. The poets remind us that while “we are born out of dark matter, out of opacity, where differences meet each other,” over time we become isolated in our differences. Together these works issue a call to live in a more liquid fashion and, channeling Glissant, “to remain obscure above all to ourselves”.

The heady moment of Jarrell’s emergence within the Black arts scene in the US is also an ironic one. Just as European and American thinkers of the post-War period began to proclaim the “death of the author” and raise suspicion about the reliability of artistic intentions, authors and artists of the Civil Rights movement fought to make their voices, identities, and anti-racist intentions clear. In Jarrell’s and Tripp’s works we see how paying homage to Black cultural heroes remains as vital in the era of globalization as it was in the Civil Rights era. But we also get the sense that in the intervening years growing concerns about the environment have lowered the pitch of identity-political claims.

Note: Both exhibitions are co-presented with the Toronto Biennial of Art.

Tammer El-Sheikh is a writer and teacher based in Ottawa and Toronto. His art criticism has appeared in Parachute, Canadian Art, ETC and C Magazine.