The word intercambio has been and continues to be many things to the exhibiting artists: it appeared in the title of Benner’s 1992 work El Inter/cambio, it is a correspondence, a set of relationships or correlations, and perhaps what Benner has described as the process of an artwork through travel and research, or how place, people, and both received and obscured forms of knowledge can grow, very much like plants which “move outwards by means of unfamiliar vectors.” It is also a word for a language exchange or a series of conversations between people who can learn on-site from each other’s native languages. 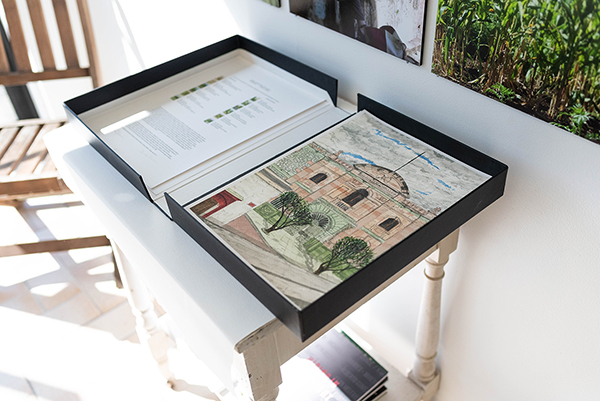 The exhibition opens with documentation and artworks from Benner and Hassan’s two-person exhibition in Oaxaca from 2013. Photographs of the Jardin Etnobotanical, as well as surrounding gardens – including, as in one instance, plants cultivated to resemble the steep wall of an enormous pipe organ – are mounted above print editions of watercolours inspired by the artists’ time in residence. Also mounted is an obituary of artist and activist Francisco Toledo which, as Benner explained, hardly begins to recognize Toledo’s international artistic influence and contribution to supporting the community of artists in Oaxaca over the decades.

In a drawing from 1977, Benner has embedded samples of ash, Montezuma pine, and wildflowers from the site of Paricutin, a volcano which destroyed Angahuan in Michoacan, Mexico. Benner’s notes from the opposite side of the paper are visible, emphasizing the drawing’s layered narrative. Speaking of the practice of keeping journals as an artist, which he and Hassan have done throughout their careers, Benner asked: “Why don’t we all draw in our journals? What stops us?” The implication is that writing and drawing are often seen as separate activities, even when happening in tandem. 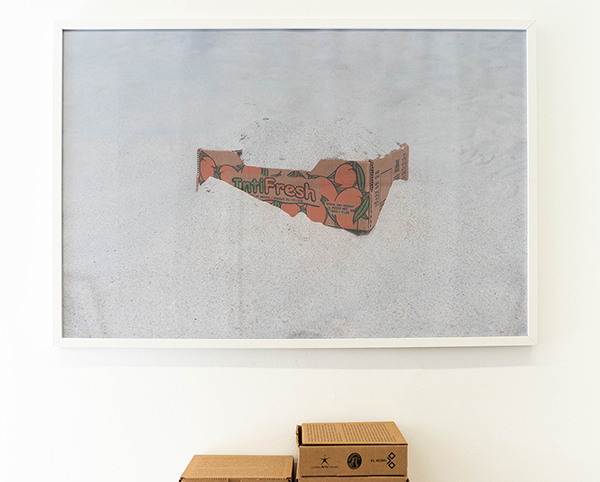 Nearby, Kim Moodie’s 1984 drawing based on travels to Quintana Roo in the Yucatan peninsula, near the archeological site of Tulum, similarly articulates a layered temporality in its quick, thick lines of ink. Further on, Jean Spence’s multi-media work inspired by her travels to Mexico are embellished with stitched patterns and figures, combining symbols of the region with visual records of personal memory. Benner relates this layering of site-specific and material markers to a “disruption of the idea of the pristine photo” or document of authority. For Benner, Moodie, and Spence, physical sites have directly influenced the materiality – or inflection – of their visual and journalistic accounts.

Next to cinematic photographs of the Yucatan by Patricia Deadman, Anahí González’s Always Fresco features the brightly coloured remains of a cardboard box partially buried in white sand. The box, originally from Mexico, is one of many Gonzalez has found in Latin food markets in Ontario. Below this photograph are additional images of Latin market advertisements as postcards and cardboard box artist multiples printed with a text on Gonzalez’s project by Andreas Buchwaldt, which is available in English and Spanish. By focusing on the boxes and advertisements used for Mexican exports, Gonzalez alludes to the “absent subject” of migrants in Western conceptions of Mexican labour, which Gonzalez notes is so often perceived as “mobile, multi-purpose, temporary, and disposable.” 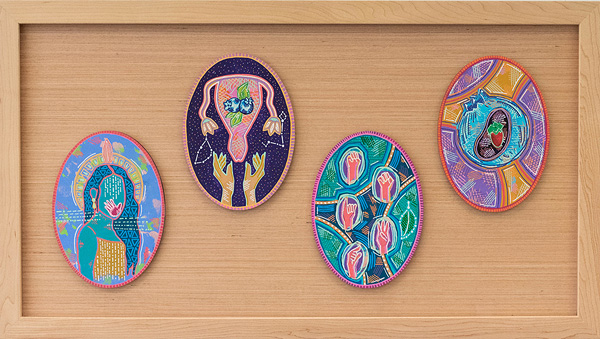 In Circle 0f Kwewag, a series of four paintings on wood, Jenna Rose Sands combines constellations with abstracted forms of berries, hands, and faces, all visualized as distinct, yet interrelated networks. These compositions appear surrounded by inner and outer architectures, often of or resembling women’s bodies. Speaking about this work, Sands described how the health of the earth – “the violation of her body” – is parallel to the violation of both ancestral lands and Indigenous women. While the ECH links Sands’ work conceptually and in proximity to Gonzalez’s by way of a larger centering of Indigenous issues, Sands’ reflective work on “all mothers and mothering figures” creates and asserts space for these gestures through her own abstract, painterly language, which is in stark contrast to the site- or event-specific language of the journal, document, or photograph used by many artists in the exhibition.

Initially developed from archival research, Intercambio/Exchange is only a small part of the larger simultaneous programming coming out of the ECH since its re-emergence as an online presence during the start of the pandemic. But beyond what has been made more available through online platforms and Zoom rooms in a general sense, I’m relieved to be able to visit individual, physical sites and artworks in-situ. While I’ve only been able to mention a portion of what is on display in this exhibition, it seems clear that the artists’ many connections, research projects, and past and present exchanges between Mexico and London have and will continue well beyond what is featured in the modest space of Support. My most immediate sense of Intercambio is of the importance and meaningful impact of the materially affective practices of its artists, which resist a kind of flattening, received idea of “truth” in what was, what remains, and what connects us in the real-time, physical spaces of community.