Known for her public murals across Quebec, Ilana Pichon’s exhibition Sequences of Territories at Martha Street Studio intuitively traversed in-situ wall-markings, screen printing, photography, and video footage – all in service of reabsorbing and interpreting the ephemeral. These floating parts came together to recount the artist’s cross-country car journeys between Quebec City and Winnipeg. She began her first trip via Ontario in 2015, by design skipped the even-numbered years, and instead went on two subsequent outings in 2017 and 2019. More than mere an accumulation of hours between far-reaching expanses, the artist’s remnants for this exhibition are very much the result of performed patterns. 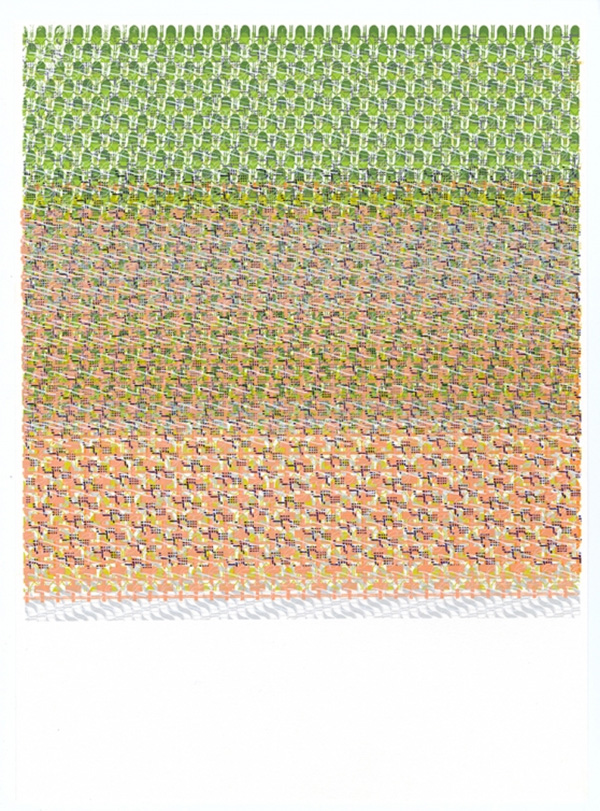 Aside from skipping a year after each trip, another peculiarity was stopping every 101 kilometers to take a break, observe, and acknowledge where she found herself at that juncture. Her screen prints on paper were gridded on the walls to mimic this patterning with stacked and tangled abstract colour textures in some registrations reading like loose references to car tire streaks.

There’s a similarly idiosyncratic playfulness that showed up in her wall colour blobs and rhythmic mark making that could read like impressionistic fragments of the scenery between the distances. Instead of anything concretely imagistic, everything here deviates from a deadpan document of experience. Even the video and photographic works were collided and overlaid with multiple exposures. Our view of them isn’t exactly steady; they come off as blurs and even at times featureless. There is a certain jointless ambiguity that seems to have been cultivated from a stream of the artist’s own consciousness.

In the end, we aren’t presented with a homage of place per se. It doesn’t necessarily lean on the sentimental frill of a travelogue. Rather, it’s an open meditation on place that plays out like an inner monologue. Pichon doesn’t seem interested in directing our attention to the specificity of landscape, memory, or her travels. She doesn’t need you to witness all the micro moments between places. She just wants you to tag in and blur with the surroundings as you ride along.

Ilana Pichon: Sequences of Territories was on display from May 10 to June 14.
Martha Street Studio: http://printmakers.mb.ca/mss/exhibit/sequences-of-territories
The gallery is accessible.