From Remote Stars, curated by Kirsty Robertson and Sarah E.K. Smith, is inspired by Buckminster Fuller’s six-day visit to London, Ontario, in 1968, wherein the futurist, systems theorist, and architect met with artists, city planners, architects, and students at Western University. The poetic title comes from a recording of a lecture, or “stream of consciousness” monologue, given by Fuller during his visit. Topics ranged from sustainability, physics, design, and a “techno-utopian” vision of the planet mixed with what London might be like in the future. The exhibition, featuring the work of 22 artists from the 1960s to the present, directly and indirectly explores Fuller’s ideas, highlighting gaps in his visions of progress and utopia. In line with Fuller’s support for environmental awareness and an avoidance of wasteful living, The Centre for Sustainable Curating, directed by Robertson, influenced the curators’ exhibition design decisions, such as the use of paper signage to replace vinyl and making use of low-impact, accessible materials when available.

In didactics and related exhibition materials, much is made of the eponymous recording of Fuller’s visit provided by late London artist Greg Curnoe. In a podcast that further explores the larger research project of the exhibition, participating artist Christina Battle and curator Robertson vividly describe the recording’s often “indecipherable” quality, full of non-sequiturs and white noise. Due to Covid restrictions preventing earphone use, Fuller’s lecture is only partially audible through parabolic speakers in the Ivey Gallery’s already echoey space, but this is alleviated by helpful wall texts positioned throughout the exhibition. 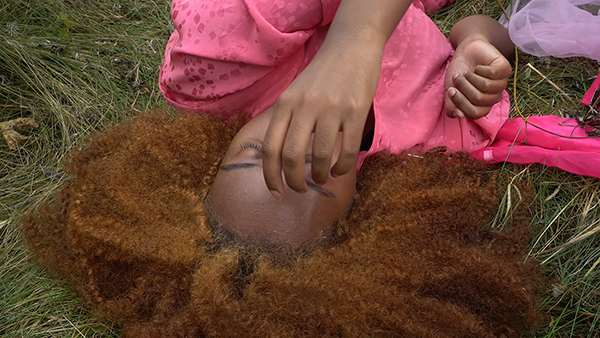 Jessica Karuhanga, being who you are there is no other, 2017, two single channel videos (courtesy: Museum London)

Fuller makes specific reference to London’s uniqueness and “integrity” as a location between Detroit and Toronto, how London is “being protected by lakes north and south,” and how the Thames River/Deshkaan Ziibi (its non-settler name not acknowledged by Fuller) is “so out of sight…the community is no longer aware” of it. Several exhibiting artists speak directly to the history of London’s waterways. In a painting by Kitaay Bizhikikwe/Amanda Myers, symbols, structures, and figures tied to Indigenous knowledges are overlayed atop many of London’s colonial structures of progress, illustrating histories, cultures, and ways of being that are absent from Fuller’s thinking. In Jessica Karuhanga’s large video projection, visible from inside and outside Museum London, two Black women move and dance through trees and tall grass, mirroring the movement of the land and river nearby. The dancers’ bodies follow the movements of water and plant life around them, hindering attempts to locate them in and separate them from a specific, static idea of landscape.

Christina Battle, are we going to get blown off the planet (and what should we do about it), 2020, video installation (single-channel HD video with sound, fabric curtain)

During his visit, Fuller talked of trying to find “some idea of…the pattern” of the “ambitions and hopes of the community” of London, predicting that in the future, the city may no longer be as inhabited. The exhibition’s curators are careful to point to Fuller’s leaning towards London as a place “not for the person who stays put,” which was very much against the grain of local artists’ then championing of Regionalism and the importance of its creative communities. Referencing a piece named after Fuller’s encounter with well-known London noise group The Nihilist Spasm Band, Kelly Wood turns their durational din (and Fuller’s unknown reaction to it) into a 2D print of textural sound, effectively redistributing and reconstituting an event otherwise suspended in the mythic status of Fuller via London’s historic art scene. In a video and installation piece by Christina Battle, excerpts from Fuller’s talk appear between images of storms, flowers, insects, birds, minerals, glaciers, and various organic forms juxtaposed with space tech, touristy snapshots of beaches, aerial views of cities, and geometric patterns. Fuller’s quotes, suggesting a search for larger patterns in “the invisible,” are updated as warnings of climate change and the ever-prevalent existence of surveillance technology. In these works, Wood and Battle evoke the presence of artists and perspectives left out of Fuller’s fraught idea of London’s hopes and dreams, gesturing towards a reimagining of his abstract patterns as information made manifest in the present. 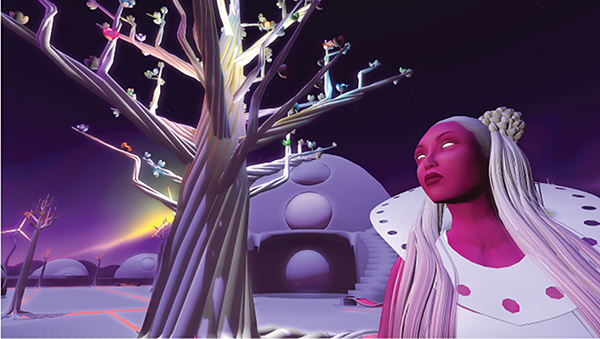 Skawennati, She Falls for Ages, 2017, machinima

In addition to referencing Fuller’s iconic designs oft linked to a utopian, Modernist architecture (such as the geodesic domes in photographs by Jade Doskow, and less directly, in Dan Patterson’s “proto-utopian” structure built from Carnation milk cans), many artists are more in conversation with Fuller’s idea of Spaceship Earth, an idea of the planet as a space craft designed for long-term existence. In Skawennati’s video She Falls for Ages, the Haundenosaunee (Iroquois) creation story of Sky Woman is envisioned in a futuristic Sky World, rendered in the virtual space of Second Life. The stiff, artificial movements of Second Life’s figurative design create a sense of temporary, potential form through which identity and story can continue to move and evolve. In David Hartt’s video In The Forest, thick overgrowth in the outskirts of San Juan overtakes the remains of the 1967 Modernist “habitat puerto rico” structures by architect Moshe Safdie. The video searches slowly in spaces between the two worlds, exploring temporal, living intervals where animal bones, spider webs, lizards, plant life, and evidence of contemporary life now inhabit desiccated and vacant spaces. In one instance, holes in the metal structures appear as windows or portals to worlds both metal and plant, an optical illusion where what is inside is also outside.

Exploring the scope and range of the exhibition’s multiple works, well beyond the length of this review, has been made accessible by the curators beyond the exhibition space through a related website, podcast, lists of suggested reading, and upcoming programming. In the intro episode of the podcast, Battle’s humorous description of listening to Fuller as “maybe you get some of it” and “maybe you zone out” is like a kind of welcome permission to dip in and out of his prophesies and broad theories, following their trails and echoes in the complex and timely conversations between the artists’ works and Fuller’s “often narrow” visions of the future.

From Remote Stars continues until May 15.
Museum London: http://museumlondon.ca/
The gallery is accessible.