Cindy Mochizuki’s installation The Sakaki Tree, a Jewel, and the Mirror is a meditation on Ameterasu, the Shinto goddess of the Sun. In the myth, Ameterasu has a terrible clash with her brother, the storm god Susanoo, who shocks his sister by delivering her a flayed horse. In anger, she retreats to a cave, condemning the outside world to darkness. Trapped in the night, the gods toil to draw her out, placing a Sakaki tree decorated with jewels and mirrors at the threshold of the cave. They gather roosters at the entrance to call her out to the morning. The goddess Amenouzume dances a wild striptease, bringing the other gods into an uproar. At the noise, Ameterasu cracks open the door. While she is distracted by the mirror’s reflection of her own beauty, the gods are able to drag her out and force her to cast the sun.

Mochizuki’s tribute to Ameterasu’s cave vibrates beautifully throughout the space of the Burrard Arts Foundation where themes of darkness and shadow connect this work in the west gallery with Howie Tsui’s exhibition Parallax Chambers in the east. Unlike so many allegories of the cave, both artists’ works invite the viewer to explore what happens if we stay inside rather than try to escape. 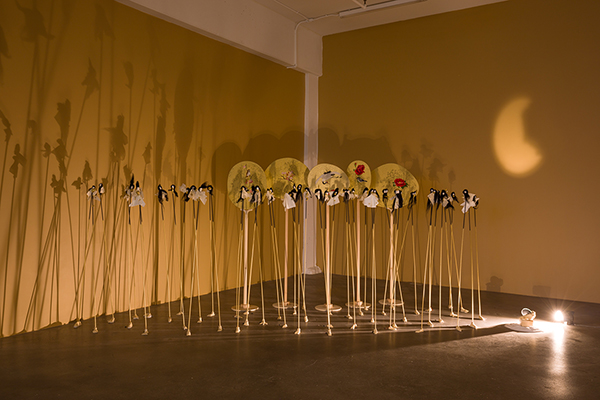 A darkened hall opens up to Mochizuki’s artwork. Built in a diagonal cluster, her installation is crowded with fifty figurines crafted individually from porcelain, clay, silkworm cocoons, mohair, and traditional Japanese rayon bunka thread. The figures are elevated on long wooden pins, each resting on a small clay foot that varies in shape and form. Five circular bunka embroidery canvases form a loose structure behind the swarm of tiny bodies. A spiral shaped pile of salt cradles a clay hand bearing a mirror. These objects are backlit by a dim golden light that casts their silhouettes along the back wall in planetary alignment, bringing fifty shadowy figures into the room together with their corporeal forms to populate the space with one hundred unique bodies.

The installation forms a kind of amphitheatre to contain the crowd of gods outside of Ameterasu’s doorway. I was struck by the individuality of each figurine. The cocoon heads all bear a different expression. Their frayed black hair is pulled in singular ways. Some have tiny glasses, masks, arms, crowns, and armour formed of gold leaf. Throughout the exhibition, Mochizuki will periodically activate these forms as divination tools where participants can have their fortunes told by the artist. The work offers viewers a rare opportunity to step into its form because one must draw extremely near to view the details – crouching low to see the feet, looking high to find the moon, casting a long, large shadow along with all the little ones. 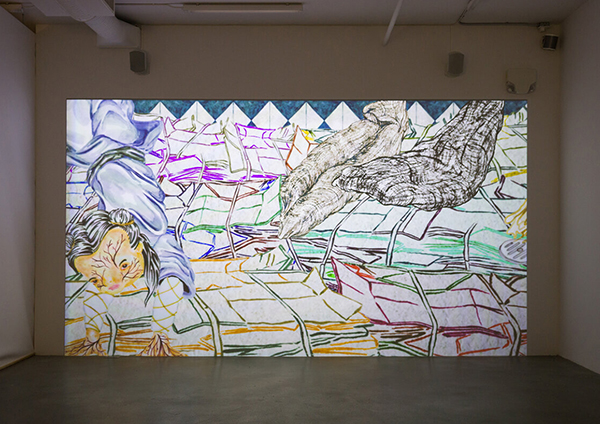 Howie Tsui’s exhibition in the east gallery provides a flipped perspective of the cave, where a single-channel algorithmic animation combines with four lightbox works that revel in monstrous delight. Tsui’s delicate use of line complements Mochizuki’s finely crafted textile sculptures. As a continuation of the process began in his large-scale media piece Retainers of Anarchy from 2017, the suite of artworks in Parallax Chambers incorporates ink drawing with animation and artificial intelligence. In the titular video work, algorithms generate a cycle of shifting chambers and rooms occupied by a range of fantastic creatures. Tsui says these characters and situations form avatars or ciphers that point back to his anxieties over the Hong Kong political crisis. Fat dead birds fall from the sky, telephones boil in rice, levitating princes turn to frog-like men. The characters interact, sometimes violently. The animation causes both line and colour to tremble, so even the walls participate ferociously.

On the surrounding walls, two lenticular prints, Joyride and Winged Assassin, extend Tsui’s animation to material format where backlighting brings motion to the flattened form. Again, it is Tsui’s deft use of line that breathes life to the works, where colour clusters, gaining momentum, so that a mountainside has a vibrant skin-like texture. Surfaces are alive and share force with the moving bodies in conflict.

In an artist talk I attended on February 15, an audience member commented on the shared darkness in both Mochizuki and Tsui’s work. Tsui’s response was to say that he conceived of the space as one that would invite the audience into his cave. Unlike Plato’s Cave where the shadows form an entrapment that only the philosopher can see, the works in this exhibition raise the question: “What if the shadows are no less alive than the figures that form them?”