Automatisme Ambulatoire: Hysteria, Imitation, Performance is an intense and sprawling exhibition taking up all five rooms and two floors of the Owens Art Gallery. It includes six challenging works by Diane Borsato, Pauline Boudry / Renate Lorenz, Claire Cunningham, Brendan Fernandes, Every Ocean Hughes, and the collective My Barbarian. Although each work speaks its own complex language – be it of the body, mind, or spirit – several unifying themes emerge. Attention is drawn to the multitude of ways in which humans communicate using words, movement, images, sound, performance, and imitation – each in our own way, each due to our own circumstances, personalities, and political and personal baggage. According to curator Amanda Cachia’s introductory text, the artists were asked to respond to three ideas: ambulatory automatism, hysteria and epilepsy. The results are as inspiring and thought provoking as they are diverse. 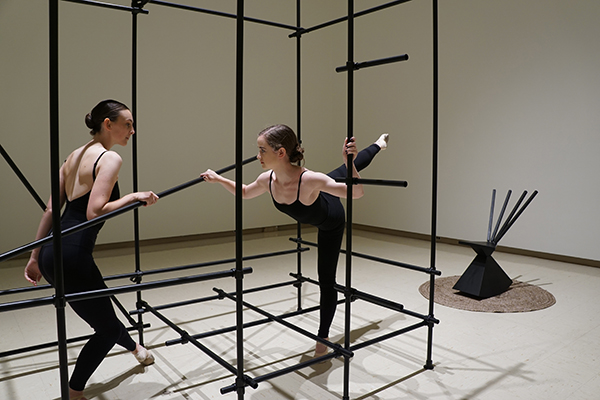 If you are lucky with your timing, on entering the gallery you will first encounter a performance by Claire Cunningham with Vicky Malin. The duo imitates Elvis tribute artists (who imitate Elvis who imitated Black American music and dance) to challenge our cultural fetishizing of perfect bodies, virtuosic physical performance, and originality. As Cunningham moves with Elvis-like gravitas and magnetism in a bright red track suit, white cape, and crutches, her movements play off and are reflected by Malin’s green track suit and white cape. One can see the humour, love, and criticism inherent in this touching imitation.

A second performance-based installation, The Rite by Brendan Fernandes, is in the room adjacent. In this upcoming performance, dancers will interact with two unstable, multidirectional “rocking chairs” and a matte black cage-like apparatus in a strenuous effort to find stillness and peace. In both works, the props, sounds, and structures will remain in the exhibition space as a tribute to or relic of the performances. 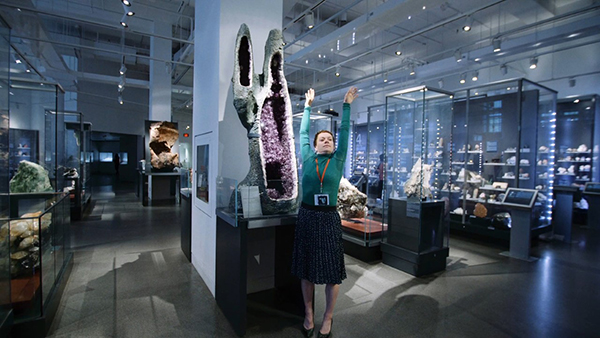 There are also two video pieces in this show: The Right to Have Rights by Pauline Boudry / Renate Lorenz and Gems and Minerals by Diane Borsato. The first is shown on an angled wall centred in a room with soft plush carpeting and a bench. It features a performer who reads the 1951 Geneva Convention (relating to the status of refugees) in an altered voice set to ambient electronic music while standing on an abandoned Berlin runway. The message comes across as an alien poem or sci-fi fantasy, as if to say that the Convention itself, although endorsed by many countries, is nothing more than wishful thinking for a nonexistent future.

Borsato’s video also plays with our preconceived notions about communication, and how delivery and performance can alter or create meaning. Museum tour guides use American Sign Language and dance, and rely on movement, expression, emotion, and humour to discuss and illuminate the disquieting social impact of corporate mining alongside the beauty and mystery of those mined materials. The artist reveals parallels between these two ways of communicating, as well as suggesting how performance influences the nuance and meaning of a script.

The two installations upstairs are Help/What/The New York Times by Every Ocean Hughes and Hysteria Theatre by My Barbarian (Malik Gaines, Jade Gordon, and Alexandro Segade). Every Ocean Hughes has placed beautiful glass vessels on a bright yellow plinth beside a yellow banner. White helium-filled balloons hang above and a small sign exclaiming “HELP” is taped to the wall. According to the artist’s statement, the piece is inspired by workshops devoted to Death Doula training. The intense brightness of the yellows and whites brings to mind the light so many people have described in near-death experiences. A mystical feeling and almost magical holiness emanate from this installation and the beautiful glass vessels seem entirely appropriate to house the spirit of the newly dead.

The bright purity of Every Ocean Hughes’ installation is contrasted by the dirtier rust colours of Hysteria Theatre. Red cushions cover the floor and banners line the walls with texts that read, “You were born middle class and poor you will die,” among other variations. One feels as if they have walked into a kindergarten class that teaches dark rituals and strange politics. The words on the banners sound like political slogans from a pessimistic and unpredictable dystopia (which, of course, resonates strongly with our current state of political affairs). On Friday the 13th the film Hysteria Theatre will be screened. According to the gallery’s text, it “projects flickering images of voice, body, life, and death across gender, class, and race, in a place where cultural forms slip from mimesis to mimicry.”

These six installations/performances left me with much to process as individual works and a collection of pieces that relate to each other. They open doors on new perspectives in considering different bodies and modes of communication, and go a long way to challenge our preconceived notions of how meaning is received.