And yet it rises at Cassandra Cassandra, Toronto

There is an apt irony in scheduling the rebirth of the local art scene at the beginning of autumn. Even before COVID, September was traditionally the time when galleries revived after their summer doldrums to kick exhibition season into gear, but this year it feels even more of a momentous return to (semi-)normal form. Sure, the triumphant embrace of pre-pandemic status quo has not been achieved, but a good part of the city, soon with vaccine passports in hand, is marching back to business as usual. The irony remains that resuscitating our engagement with art – that which has for so long sustained us – happens when nature begins its annual decline. These opposing forces of life and death, order and chaos, becoming and unbecoming can be heard loud and clear in the perfect duet of artists now on view at Cassandra Cassandra. 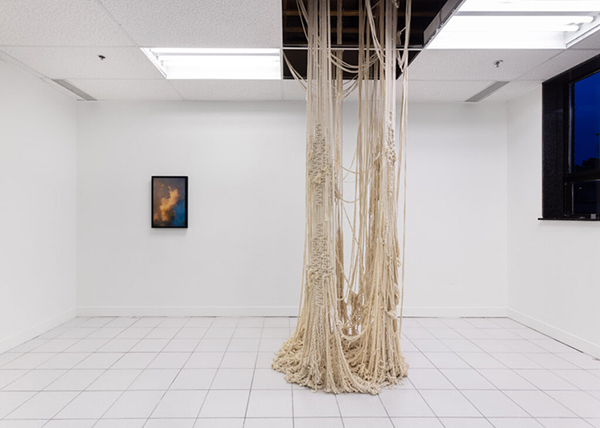 Safouane Ben Slama and Samar Hejazi, And yet it rises, 2021, installation view

This two-year-old gallery on the westernmost frontier of Toronto’s art community has with minimal means hosted an impressive array of compact exhibitions featuring Canadian and international artists. CC occupies its space on an alternating basis with the gallery Pumice Raft, and its current offering is included in this weekend’s internationally co-ordinated Gallery Weekend event (Montreal is the other Canadian city participating). Titled And yet it rises, the pairing of Toronto artist Samar Hejazi (who will give a gallery tour this Saturday, September 25 between 3 and 4pm) and Paris-based photographer Safouane Ben Slama creates, despite their use of disparate mediums, an evocative coming together of shared themes. Both artists capture that movement between form and formlessness, isolating the moment when their subject is simultaneously both and neither. In doing so, they leave one to choose their direction: up or down, order or disorder, creation or destruction, etc. 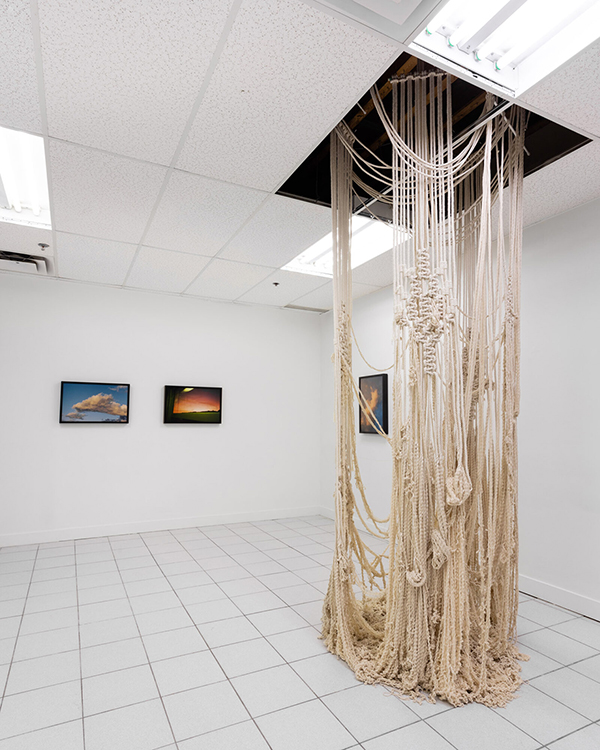 Safouane Ben Slama and Samar Hejazi, And yet it rises, 2021, installation view

Hejazi, who has previously worked on a smaller scale disassembling the threads of textile works, goes big with a rope installation that exceeds the boundaries of the gallery. Hung from exposed rafters and draped on the floor, the material of this inverse sculpture (rather than sitting on the ground and being built upwards, it falls from the ceiling with the force of gravity) starts off twined in tight cords before moving through knotted patterns and then ending up in a mass of jumbled fibres. At least that’s what you see if you look from top to bottom. The opposite story is told when you move, floor to ceiling, from disarray to coherence. Alongside these formal concerns, a political parable is present in the work’s resistance to containment and, as the exhibition texts states, “the infinite possibilities in which it can be grouped and molded.” A further layer of interpretation can be found through the artist’s references to her Palestinian background, and a critique of the colonial impulse to restrain and repress emerges. 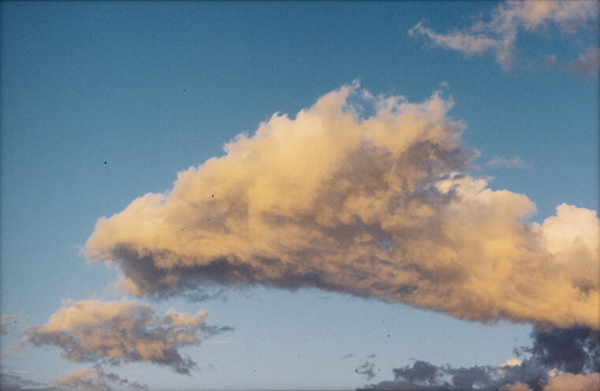 Ben Slama’s snapshots of the sky at sunset are quieter in comparison to Hejazi’s sizable work, but they gradually acquire definition as part of a series and in parallel to the ropes. The pictures were the result of an effort on the part of the artist to establish a sense of order or routine in his life at a time when he needed it. This daily ritual, an attempt to find stability, is funnily enough focused on the moment when the inescapable passage of time is most visible to the naked eye. Perhaps that is why we stand in wonder and watch as the sun slowly, but undeniably sinks below the horizon and we are moved from light into darkness. That Ben Slama also includes images of clouds – those equally fascinating amorphous shapes that are always in flux, and seem solid, but we know are barely there – is further evidence we are being both thrown off balance and held in place.

Turning back to Hajazi’s hanging, and newly sensitized to the play of light from studying the photographs, further dimensions are introduced in her work, allowing for even more formal analysis and layers of metaphor. The sense of vertigo one experiences when a work or an exhibition opens up in this way is yet another suspended binary, in this case between fear of the unknown and the excitement of discovery. It’s exactly what we’ve been missing this past year of shuttered galleries and what awaits us now that things are back in motion.

And yet it rises continues until October 3.
Cassandra Cassandra: http://cassandracassandra.ca/
The gallery is not accessible.