The New Gallery exhibition Hopping for Hope explores Korean-born, Montreal-based artist Ahreum Lee’s experience of political borders, the processes of and possible negative ramifications that go hand-in-hand with immigration, and her research on the mapping methodology used by Google. Through her work with lo-fi game technology and video techniques, she provides a humorous and critical look at how we understand territories and borders in the age of the internet and the mass consumption of imagery. 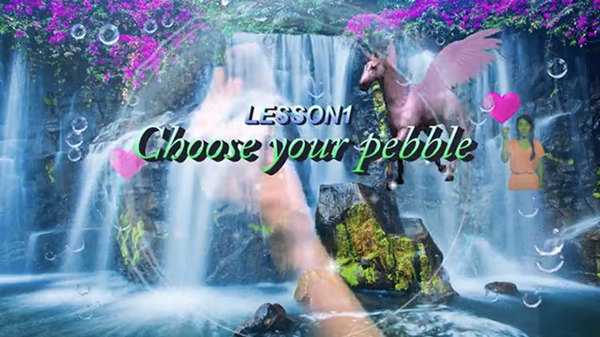 A video installed low along the floor casts its toxic glimmer across a Google Earth map. Laid over top is another map with spaces demarcated using black lines and numbers that represent a South Korean version of hopscotch. An instructional video explains how to play the game. Players toss a pebble and whichever space it lands on the player then “owns.” The winner is whoever “owns” the most spaces on the map or the most “land.” Hopping for Hope the game, but also the entire exhibition, presents a utopian world in which a simple act renders the player the owner of property. To own or possess land specifically implies a colonially derived understanding of land ownership. This is made even more complex when considering borders as delineated by Google Maps. Looking at borders on the internet renders them not only invisible, but also, as the artist notes, imaginary. This calls into question inherent privileges concerning freedom of movement within a politicized world. As an immigrant, Lee holds a position from which she can critically frame questions involving the politics of movement across borders – physically and digitally, real, imagined, and otherwise – and how this plays into our contemporary understanding of land borders in a world working towards decoloniality.

Ahreum Lee: Hopping for Hope continues until February 22.
The New Gallery: http://www.thenewgallery.org/
The gallery is accessible.

Maeve Hanna is a writer and curator who holds a Bachelor of Fine Arts Honours in Visual Art and Literature from York University and the University of Leeds and a Master of Arts in Art History and Icelandic Studies from Université du Québec à Montréal and the University of Manitoba on location in Iceland. She has previously written for Black Flash, C Magazine, Canadian Art, esse arts + opinions, Frieze, Sculpture Magazine, and the Senses and Society. She is Akimblog’s Calgary correspondent and can be followed on Instagram @maeve_hanna.