If I was to give the year an overall tone I would echo Terence Dick’s feeling of uncertainty from last week. As many of my reviews this past year have reflected, Montreal is going through major transitions and many of the concerns felt in full force in Toronto are finding their roots here. The tech industry and tech universities are intensifying their presence in the city and residents are feeling the impacts. For Sale signs abound alongside posted renovation permits that turn multi-unit residences into massive single family homes. Widespread evictions and unmanageable rent increases climb steadily. Landlords find new ways to remove tenants or keep them from transferring leases. These economic and social realities were often reflected in arts programming and have become part of the general pulse of the arts ecosystem. Vie D’Ange in Mile Ex finally received its eviction notice. The Darling Foundry raised enough funds to buy their historic building and residence space. The Montreal Museum of Contemporary Art closed, re-opened, and then saw its workers strike. Steadfast figures in the arts milieu left their positions or saw their contracts end, including Jennifer Dorner at FOFA and Pip Day at SBC. And the dissolution of two very visible commercial galleries – Parisian Laundry and Galerie Antoine Ertaskiran – as of December 31, will see them re-emerge as one under the new name Bradley Ertaskiran. While the fall was vibrant with the sprawling exhibitions of MOMENTA | Biennale de l’image, it was hard not to feel a kind of latent fog from the collapse of the Montreal Biennial that lingered especially heavy as Toronto celebrated the launch of its first. Every couple of months I swear someone brings up the biennial’s demise, speculating what happened and why. And where is Sylvie Fortin anyway? 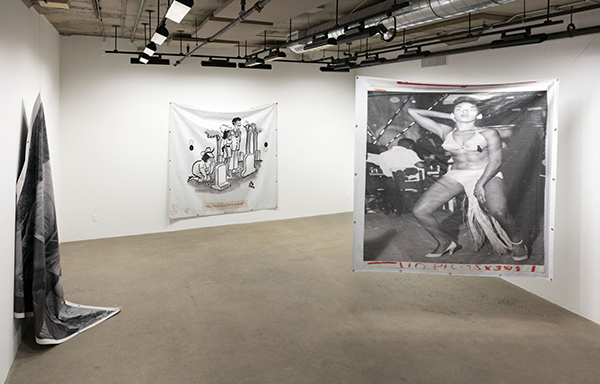 For me, this year was all about re-entry, it was a humbling year of re-introduction, of learning to watch, listen, and be a generous participant in whatever ways were possible. It felt like a crash course in a scene I knew, but was also very much on the periphery of. If I think of the year as a self-guided intro to Montreal contemporary arts, it is fitting that one of my favourite exhibitions of 2019 was The Banner Waves Calmly, a solo exhibition from Theaster Gates, guest curated by Daisy Desrosiers at Centre Clarke. Aside from  possibly being the most charming human alive, Desrosiers was also the beloved curator of the now closed Battat Contemporary. For this exhibition, Gates looked to the Johnson Archive, pulling a selection of images that might have been intended for one of the Black pop culture magazines the Archives encompasses like Tan, Jet, or Ebony. The photos are in a raw, pre-editorial state, occasionally including editorial notations. A dancehall performer, a satirical racist cartoon, and an elder woman praying were printed in large-format on vinyl, draped sculpturally, and secured with large nails or nylon rope.

Having just closed Days of Reading: beyond this state of affairs, an exhibition I co-curated with Jenifer Papararo in Winnipeg that started from a Gates piece that also draws on the Johnson Archives, it was exciting to see how differently the archives were treated in each case. In The Banner Waves Calmly, archival images that may never have found a place in publication or only had a small corner of a page were enlarged and given rich physical presence, whereas in Do I Know You, the piece we worked with in Winnipeg, hundreds of Jet magazines were bound up in black jackets with embossed poetry on the spines. Departing from this context of refusal, The Banner Waves Calmly feels like a generous representational gift from Gates to Desrosiers and, in turn, to us, whereas Do I Know You feels like a protective gesture. Both gestures are powerful and important in their own ways. 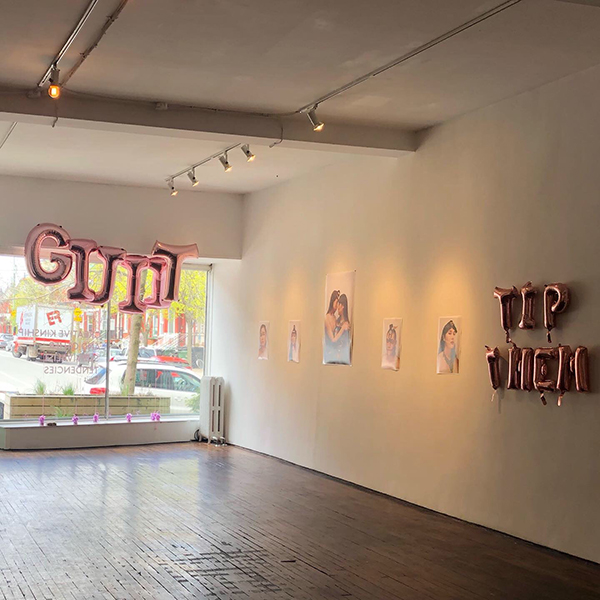 In May, Adrienne Huard and Lindsay Nixon made their curatorial debut as gijiit with Creative Kinship and Other Survivalist Tendencies at Articule, featuring Dayna Danger and Stacy Lee, Moe Clark and Beric Manywounds, and ReCollection Kahnawake as well as Huard and Nixon. Having gone to Concordia with Adrienne just before I finished my Master’s and with Lindsay attending just after me, I was excited to see their collaborative project, which itself was premised on collaborations where artists worked together in a non-hierarchical mentorship/residency format to produce the works. While I didn’t make it to many of the public or semi-private events associated with the exhibition, including the amazing fundraiser where Huard showed her prowess on the pole and Danger sported a dress made of balloons, the feeling of at once not giving a fuck about a final product or an audience outside their “crew” and a deep tender openness remained in the exhibition space where helium balloons that read “Tip Them” and “gijiit” were left. It was also really pleasurable to see artists like Danger, whose iconic images of oiled up bodies with antler racks or beaded BDSM masks have become so synonymous with their work, make something so wholly unrecognizable as a result of the collaborative process with Lee.

Not far removed from the apocalyptic mayhem Nixon and Huard reference in their curatorial statement for Survivalist Tendencies was a standalone lecture by Forensic Architecture founder and director Eyal Weizman titled Forensic Architecture: The Long Duration of a Split Second programmed by the Museum of Contemporary Art and hosted by the Bibliothèque et Archives nationales du Québec. I had often tried to understand Forensic Architecture’s work via their website and heard their name for years, but their practice always felt somewhat opaque. Which is funny because it is the very definition of transparency and there was certainly nothing opaque about this talk.

Weizman opened with flashing images of a single bomb cloud formation taken at different angles over the Gaza Strip during the massive 2014 air strikes by Israel, elucidating FA’s approach to images and the “wild” of the internet as source materials for deep forensic investigations into some of the most contentious and politicized events worldwide: Palestine and Israel, Safariland weapons, and police shootings in the USA. In one of the most profoundly disturbing moments, Weizman deconstructed the 2018 police murder of Harith Augustus, a barber from the south side of Chicago. True to the lecture’s title, the incident is traced moment by moment using footage taken from police body and dash cams, and 3D modelling technologies to reconstruct the perspective of Augustus himself and give a bird’s eye view of the scene. Close-ups reveal the victim attempts to show officers his license to carry the gun attached to his hip, which he tragically reaches for as he attempts to run away from the increasingly aggressive police. Weizman concludes this portion of the talk dramatically and dryly by speculating along with us. What’s more likely? That he was planning on shooting his way out of there? Or, as his dad suggested, holding up something heavy attached to his pants as he fled? If only all this technology could allow us to see how long the duration of a split second actually is in real time, maybe we would all make better decisions.