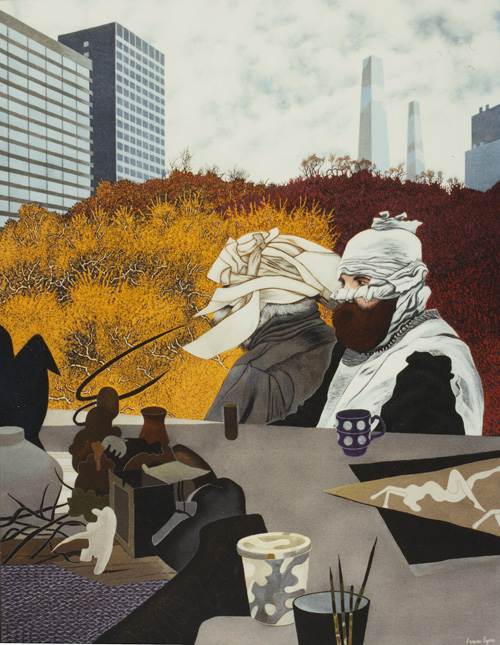 Ivan Eyre, Table Tower, 1992, acrylic on canvas. Collection of the School of Art Gallery, gift of the Artist.

In the early 1950s, a group of American artists came to Winnipeg to teach at the University of Manitoba’s School of Art and radically modernized the curriculum. Among them was Robert Nelson, a young artist who nurtured close friendships with his students and brought a unique perspective to his teachings. While he only taught in Winnipeg for three years, his impact continued long after his time at the School of Art. As the only surrealist among a cohort of abstractionists, Nelson introduced surrealism to Winnipeg and profoundly influenced his students; Surrealist Suggestions examines Nelson’s legacy—one that continues to outlast in the short time he spent in Winnipeg.

A Snowstorm in My Heart: Surrealist Shorts from Winnipeg
Saturday, August 21, 8:00 to 9:15 pm CDT
Curated by Lindsay Inglis
Presented in partnership with the Winnipeg Film Group. Free streaming at Cinematheque at Home
Join us for an oddly intriguing, darkly humorous, and often sublime screening of surrealist short films from Manitoban filmmakers.

Guy Maddin: My Winnipeg
Saturday, August 28, 8:00 to 9:45 pm CDT
Presented in partnership with the Winnipeg Film Group. Free streaming at Cinematheque at Home
In this feature-length “docu-fantasia,” Guy Maddin creates a portrait of his hometown that slips between realism and surrealism, incorporating archival footage, history, re-written memories, interviews, and dreams.

David Hockney, art poster for the games of the XXth Olympiad, Munich, 1972. Collection of the School of Art Gallery.

Playful Application:
Designing the Elements of a Notion of Utopia

The 1972 Munich Olympics had high hopes to convey to the world a new image of peace, coexistence, and friendship for Germany, a recovery from the 1936 Berlin Olympics held during the Nazi regime. With a playful colour palette, minimal security, and a record number of athletes and sporting events, “The Happy Games” were set to be the biggest and best Olympic Games ever. Branding by the graphic designer and typographer Otl Aicher proposed a synthesis between art and sport that would offer visitors an opportunity to “experience humanity as a unified whole, as a model of society without violence or borders” – as part of this vision, a series of beautiful, and strikingly avant-garde posters was commissioned by some of the world’s most celebrated artists.

Unfortunately, the 1972 Olympiad would not be remembered happily, forever marked by the tragic attacks of the Munich Massacre, a terrorist attack which claimed the life of 11 Israeli athletes. Playful Application considers the utopian dimensions of events like the Olympics, which attempt to transcend global crises and strife, sometimes to fatal ends. It presents the stunning poster series that Aicher commissioned in its entirety, while framing a discussion of the ideological limitations and possibilities of branding and design.

Playful Application Curatorial Tour and Design Relay Race
Wednesday, September 22, 7:00-8:30 CDT
Facilitated on Zoom and live-streaming on the School of Art Gallery, University of Manitoba YouTube channel
Ready, set, go….Helvetica! Join us for a design relay race by UM School of Art Design alumni. Moderated by Playful Application curator Shaneela Boodoo, presenters will only have six minutes and twelve slides to present on their work before handing the baton to the next designer. 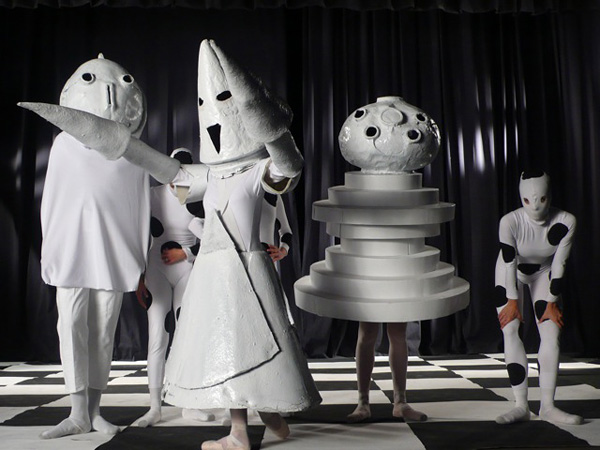 Marcel Dzama: A Game of Chess

A Game of Chess is an homage to one of Marcel Dzama’s primary influences, Marcel Duchamp, an artist who nearly gave up art in favour of chess. In 1932, Duchamp wrote Opposition and Sister Squares, a book on chess that is equally considered an artist’s book. While it was originally commercially unsuccessful, Dzama was so fond of the book that he reprinted it in 2011, the same year he produced A Game of Chess.

In Dzama’s film, which owes much to Dada, Surrealism, and Bauhaus theatre, people are forced to become chess pieces and polka-dotted pawns. They dance across a giant chessboard, entertaining an uncanny audience of captivated yet inexpressive masked figures. Here, chess combines the elegance of ballet with the high stakes of a gladiator ring. Like gladiators, these individual’s fates are not their own; they are controlled by two men simply playing a game of chess. Only when these two worlds intertwine and the men playing chess are no longer safe in their own environment does a true winner emerge.

Marcel Dzama is a multidisciplinary artist born and raised in Winnipeg and currently based in New York City. He graduated from the School of Art in 1997 and was a founding member of The Royal Art Lodge.

The School of Art Gallery, located in Winnipeg, Manitoba, is generously supported by the University of Manitoba, the School of Art, and the Government of Canada, and by faculty, staff, donors, and volunteers. It sits on Treaty 1 territory, and on the homeland of the Métis Nation. 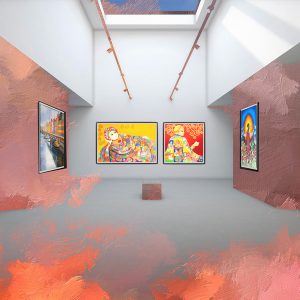