Reflections on Life: Celebrating Richard Rudnicki, Artist, Advocate for the Arts, the Environment and Social Justice 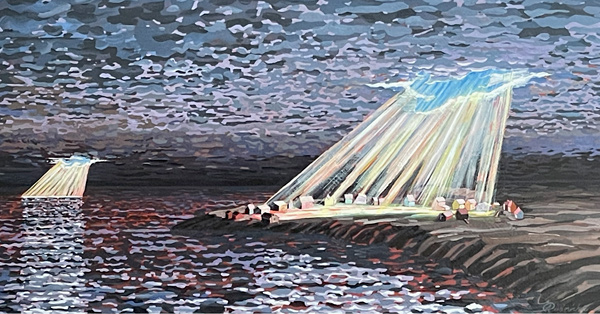 Born in Yorkton, Saskatchewan May 14, 1951, Rudnicki was educated in commercial and fine art, then began his graphic design career in Ottawa, later working as a graphic artist with Canadian University Service Overseas (CUSO) before moving to Lawrencetown, Nova Scotia. In 1995, he sold his successful design company in order to devote himself to his passion for visual art.

“Richard had a strong interest in history, and served as artist-in-residence at the Army Museum, Halifax Citadel. His commissions include a mural commemorating the 75th anniversary of WWII; the first battle of the 85th (Nova Scotia Highlanders) Battalion on Vimy Ridge and Freedom Halifax 1814 that depicts Black refugees escaping slavery on their arrival in Halifax. At the time of his death in 2019, was nearing completion of a graphic novel about the role of the HMCS Sackville in the Battle of the North Atlantic”, said show curator. Susan Tooke.

Richard received many awards as an illustrator and writer of children’s books including The Lillian Sheppard Award, The Golden Oak Award, Canadian Jewish Literary Award for Children and Youth Fiction, as well as the 2019 Vancouver Children’s Round Table Award.

About the Curator
Susan Tooke is a painter, celebrated illustrator and is also known for her work in media arts. In 2008, she married Richard Rudnicki and in 2018, they moved to their new home in Port Royal, Nova Scotia. Susan received the prestigious Established Artist Recognition Award in acknowledgement of her artistic contribution to the province of Nova Scotia.

ARTSPLACE is a public Art Gallery that is operated by the Annapolis Region Community Arts Council, a registered non-profit, charitable, community organization dedicated to encouraging and promoting the arts. Supported through the Province of Nova Scotia and the Canada Council for the Arts.