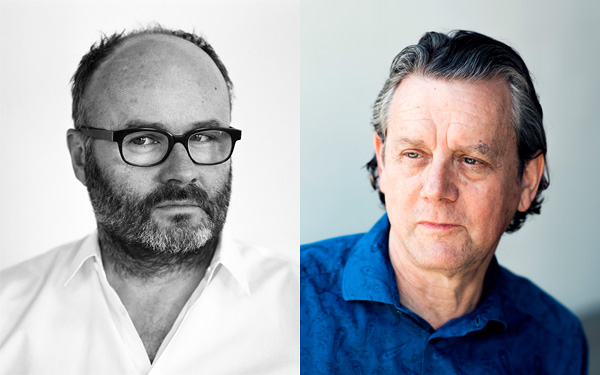 In conjunction with the opening of Thomas Demand HOUSE OF CARD at MOCA Toronto, the Museum is excited to present a conversation between Thomas Demand and Canadian artist Jeff Wall, both leading contributors to the advancement of photo-based contemporary art practice.

The conversation will be followed by a live Q&A. MOCA also encourages guests to submit questions for the artists ahead of time here. These questions will be integrated into the discussion.

Doors will open at the Isabel Bader Theatre at 6:30pm, where food and beverage will be available for purchase.

Jeff Wall is a renowned Canadian conceptual photographer (born and based in Vancouver) who is best known for his large-scale photographs printed on transparencies and presented using back-lit light boxes. Working in photography since the 1960s, Wall has made a significant contribution to the evolution of the artform through his experimentation and exploration of scale, texture, colour, subject, and approaches to production. Wall’s photographs are inspired from a variety of sources ranging from historic art works to mundane, day-to-day encounters. Wall often meticulously reconstructs these scenes or images, drawing on notions of painting and cinema, to create complex tableaux which he then photographs, resulting in a process-rich and highly intriguing artistic practice. Wall has exhibited internationally including his most recent solo exhibitions at Glenstone, Maryland (2021); Economou Collection, Athens (2019); Kunsthalle Mannheim, Germany, touring to Mudam Luxembourg (2018). Past notable solo exhibitions include those at the Art Institute Chicago (2007); Tate Modern (2005); and the Whitechapel Gallery, London (2001). Wall’s work is included in the collections of many institutions including the Gagosian Gallery (New York), Guggenheim (New York), the National Gallery of Canada (Ottawa), Tate Gallery (UK), the Vancouver Art Gallery (Vancouver), the Met (New York), the Museum of Modern Art (New York), the Hammer Museum (Los Angeles), the San Francisco Museum of Modern Art (San Francisco) and the Kunstmuseum Basel (Basel).

Thomas Demand is well-known for large-scale photographs of 3-D models that replicate notorious or familiar scenes, which he creates from paper and cardboard. After photographing them, he destroys the models. HOUSE OF CARD refers to the precariousness of Thomas Demand’s practice as a builder. The exhibition features a selection of Demand’s large-scale photographs, with emphasis on his exploration into architecture, model making and collaborative processes.