Mastering Lithography – Tips from the Pros

PRINT LONDON presents a series of virtual artist talks in June by esteemed Canadian printmakers who are masters of stone and plate lithography. Speaking from the printmaking studios where they currently practice, these artists will take viewers on a tour of their work in this medium from the site of production.

These talks will be of interest to both printmakers and professional visual artists who have contemplated working with a custom printer. 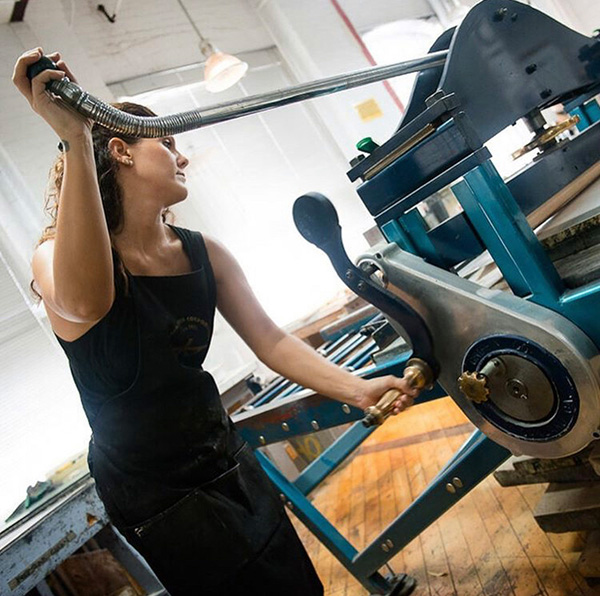 Jill Graham in the studio at NSCAD University

Jill Graham received her Bachelor of Fine Arts, with distinction, from Concordia University, Montréal, Québec, and her Master Printer Certificate from the internationally renowned Tamarind Institute of Lithography, Albuquerque, New Mexico, USA. She has apprenticed with master printers Christian LePoul, at Atelier Circulaire, Montréal, and Bill Lagattuta, at Tamarind Institute, Albuquerque, USA. One of only a handful of Canadian printers to achieve certification in her field, Jill has amassed over 15 years of professional printing experience in both a technical and instructional capacity, in university, non-profit and collaborative studio settings. Most recently she has been sought after to train other printers at both the Artists’ Press in White River, Mpumalanga, South Africa, and at Kinngait studio in Cape Dorset, Nunavut. Jill is currently NSCAD University’s printmaking technician and the Lithography Workshop: Contemporary Editions master printer, in Halifax, Nova Scotia. A few of the artists Jill has printed for include: William Kentridge, Diane Victor, Suzy Lake, John Scott, Doris McCarthy, Shary Boyle, Brendan Fernandez, Joscelyn Gardner, Liz Ingram, Jordan Bennett, Endi Poskovic, Leslie Dill, Hung Liu, Enrique Martinez Celaya, Hayal Pozanti, David Row.

One of Canada’s most innovative printmakers, Otis Tamasauskas RCA was born in Germany, immigrated to Canada in 1952, and has worked as custom printer in etching and lithography at Open Studio in Toronto, as well as teaching at the University of Toronto, McMaster University, and for 38 years at Queen’s University where he was a tenured Professor from 1987 – 2018. His work has been included in numerous international print biennials as well as important curated group exhibitions in China, Japan, Cuba, Chile, USA, and Australia. As a Master Printer, he has collaborated with over 50 Canadian artists including Brendan Fernandez, Stephen Andrew, Jacqueline Hoang Nguyen, Geoffrey Farmer, Sherry Boyle, Louis Jacob, Vera Frenkle, and Ed Pien. From his studio in Gananoque, he continues to actively create unique prints using waterless lithography with a collage aesthetic. His work is represented in many Canadian public collections and he has received multiple awards throughout his career. 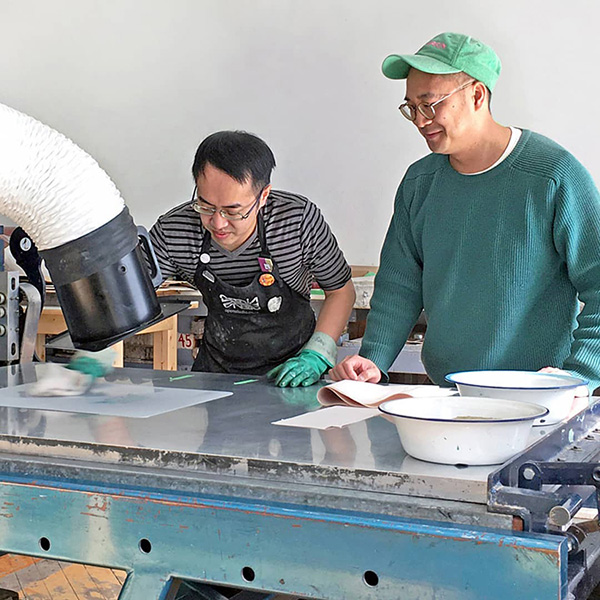 Pudy Tong’s memories of his immigrant Canadian childhood are punctuated by the images of large stacks of Chinese newspapers landing on his family’s doorstep every two weeks, air-freighted in from Hong Kong to a small rural town in British Columbia. His print-based art practice draws on elements from journalism as the subject through which our experience of contemporary, media-saturated society is refracted, reinterpreted and re-imagined. He received his BFA from the University of British Columbia Okanagan and an MFA from the Nova Scotia College of Art and Design University. Based in Toronto, he works as an instructor and custom printer at Open Studio with a focus in photo-lithography. He has had the privilege of creating prints with artists from a wide range of artistic disciplines including Jenn Law, Erika DeFreitas and Kotama Bouabane.

PRINT LONDON would like to thank our sponsors for supporting this series of talks.

Please visit us at www.printlondon.ca or at one of our Social Media sites for ZOOM links to each event. All events are free.
On Facebook
On Twitter
On Instagram