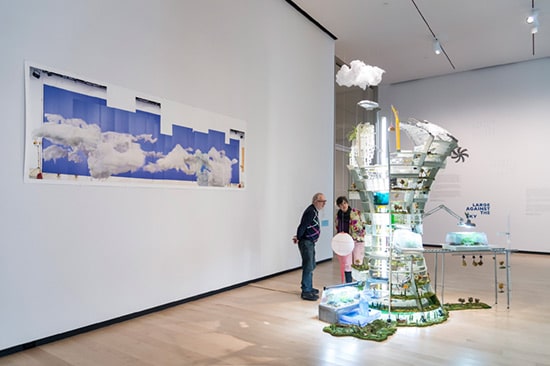 MANIF D’ART 9 – THE QUEBEC CITY BIENNIAL IS TAKING OVER THE CITY
The spotlight is on talent from here and abroad, monumental works, and Indigenous art

Manif d’art – The Quebec City Biennial, produced in collaboration with the Musée national des beaux-arts du Québec (MNBAQ), is pleased to announce its ninth edition. All the exhibits in the winter biennial will be open Until April 21, 2019, in a multitude of locations throughout Quebec City. The main exhibit will be in the Pavilion Pierre Lassonde at the MNBAQ. All exhibits and activities can be found on our website.

This year’s biennial, orchestrated by guest curator Jonathan Watkins, director of the Ikon Gallery in Birmingham, England, raises essential questions about the relationships between humans and nature, their environment, each other, and even about their very future on Earth.

The notion of excess, very much in keeping with the theme of Small Between the Stars, Large Against the Sky*, will find expression in sites all over the city of Quebec. Several artists will present monumental works as part of the MNBAQ exhibit or as public art pieces. Among them are Beat Streuli (Switzerland, Belgium) and Marianne Nicolson (Dzawada̱’enux̱w, British Columbia), respectively covering with imposing murals the windows fronting the Marie-Guyart building and the glass façade of the Monastère des Augustines. At the MNBAQ, visitors will be dazzled by the spectacular, sprawling work of Krištof Kintera (Czech Republic) and the gigantic phantasmagoric pieces by the duo of Jim Holyoak (Canada) and Matt Shane (Canada). They will also be intrigued by the curious flock of swan pedal boats by the artist Shimabuku (Japan), a strange sight in the winter landscape of Lévis, near the ferry crossing.

Spotlight on talent from home
In addition to well-established artists from abroad – such as Christiane Baumgartner (Germany), Haroon Mirza(England), Rika Noguchi (Japan), Dinh Q. Lê (Vietnam, United States), Cornelia Parker (England), and George Shaw (England) – Manif d’art 9 –The Quebec City Biennial is proud to fulfil its mission by placing a special emphasis on Quebec talent. Whether emerging or emeritus, more than 40% of the artists taking part in the biennial are from the province of Quebec. They include, to name just a few, Patrick Bernatchez (Montreal), Daniel Corbeil (Val-d’Or), Caroline Gagné (Quebec City), Fanny Mesnard (Quebec City) and Reno Salvail (L’Ange-Gardien) in the main exhibit at the MNBAQ, as well as Amélie Laurence Fortin (Quebec City) and Anne-Marie Proulx (Quebec City), who will present their works in solo shows and as part of the public art exhibit. 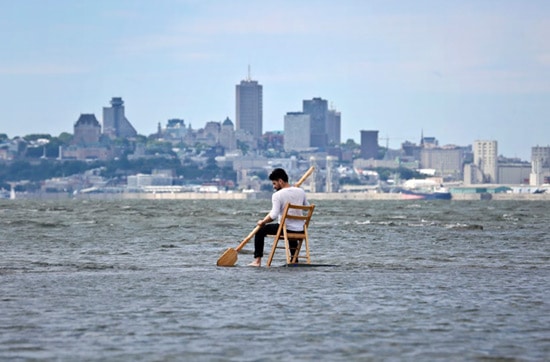 Falling in love with Indigenous art
The international curator of the biennial has fallen in love with Indigenous art, and visitors will reap the benefits. The artists from Indigenous culture, with the special relationships they perpetuate with nature, land and the environment, are a perfect fit with the theme of Manif d’art 9. In the main exhibit, 25% of the works are by Indigenous artists, including Manasie Akpaliapik (Arctic Bay, Nunavut), a well-known artist whose work is featured in the Art inuit. La collection Brousseau – Ilippunga collection in the Pavillon Pierre Lassonde at the MNBAQ, Britta Marakatt-Labba (Sami, Sweden), and Meryl McMaster (Siksika, Ontario), as well as Shuvinai Ashoona (Kinngait, Nunavut), recent winner of the prestigious Gershon Iskowitz prize recognizing established Canadian artists. Nadia Myre (Kitigan Zibi Anishinabeg, Quebec) and Hannah Claus (Montreal, Quebec) will present their work at Le Lieu and the Musée Huron-Wendat in solo exhibits.

Young curators warm to the theme
Thirteen Young Curators will put forward their own interpretations of the biennial’s theme in 10 exhibits and one lecture. These discoveries are sure to please lovers of emerging contemporary art from Quebec City.

Manif d’art 9: Contemporary art for all
For art buffs and neophytes alike, the public art exhibits in Old Quebec are a must-see. Visitors can bask in the beautiful old city while taking in nearly 10 works. Murals, installations and even a sound piece will surprise passers-by until April 21, 2019.

For its ninth edition, Manif d’art has increased its family activities. As part of the P’tite Manif, families are invited to attend an exhibit designed just for them and to take part in various activities, including creative and technical exploration workshops, a discovery rally, and philosophy activities at the Méduse, Quebec City libraries, and the Maison Tessier-Dit-Laplante. Parents can choose from a panoply of possibilities to inspire their children with art and play.

* “STORIES OF THE STREET” BY LEONARD COHEN. COPYRIGHT © 1993, LEONARD COHEN, USED BY PERMISSION OF THE WYLIE AGENCY (UK) LIMITED 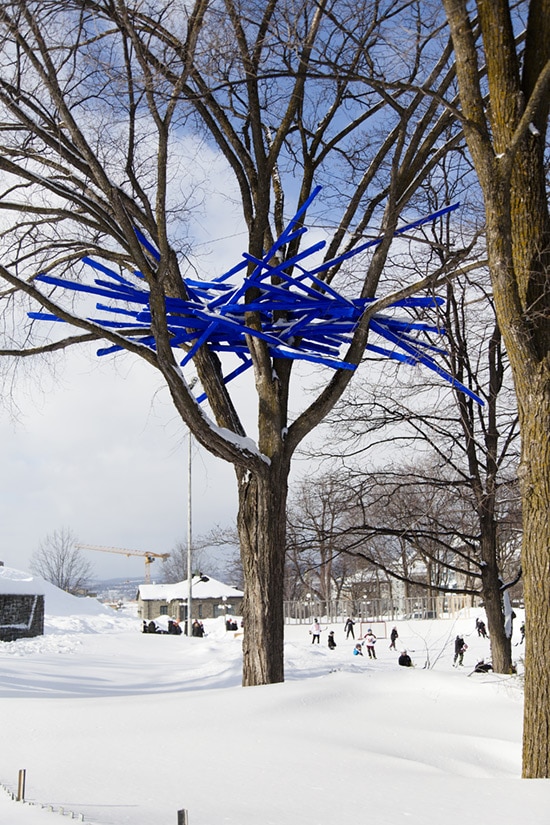 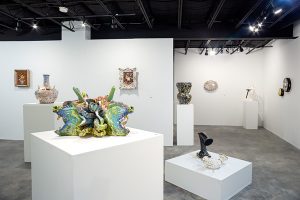