Luis Mora: Say it with Flowers 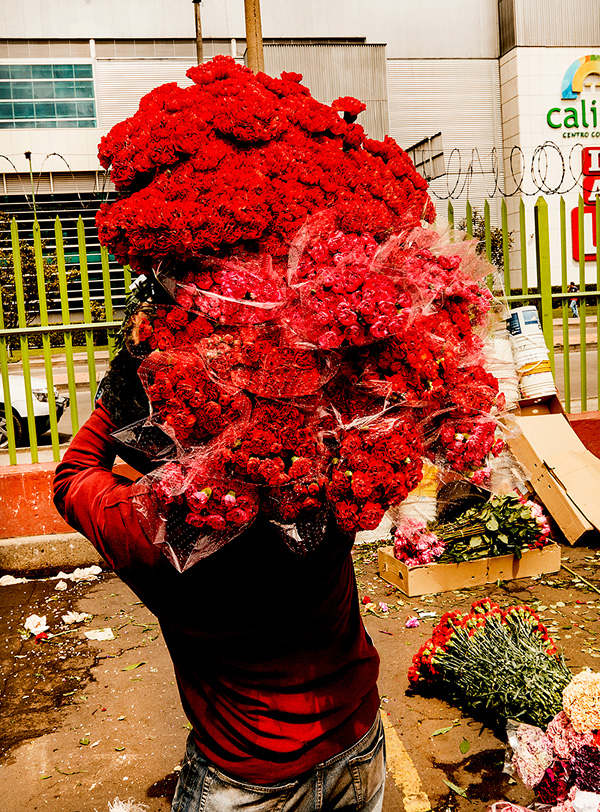 Luis Mora
Say it with Flowers

Flowers are often given in moments of joy and sorrow and have a multitude of connotations. When words fail, flowers become symbolic gestures and the ritual of offering them is as old as recorded history. The title of this exhibition by Toronto-based artist Luis Mora is a simple statement—Say it with Flowers—and the work functions as a love letter to Colombia, the country where Mora was born.

In 2000, when Mora was 12 years old, his parents decided to emigrate, and the family eventually settled in Toronto. He returned to Colombia for the first time in 2013, reacquainting himself with the country’s beautiful sights, people, and energy. The return to his birthplace gave way to a deeper curiosity that eventually led him to the famed Paloquemao market.

Paloquemao is a sprawling traditional food, goods, and flower market located in the capital of Bogota and is the second largest of its kind in the nation. The market is known as a place where the rigidly divided social classes of Colombia collide and it reveals complicated religious and political themes that reflect broader social narratives. Colombia is one of the largest flower exporters in the world, shipping more than $1 billion in blooms and dominating North American markets. For Mora, the life cycle of a single flower cultivated in one country and destined to end up in another is a metaphor for his own life and immigrant story. In turn, it echoes the aspirations of many people living in Colombia. Today, young Colombians are often raised knowing that they are going to end up somewhere else: a “leaving soon” mentality. Much of this is due to the current migrant crisis with Colombia’s neighbouring country of Venezuela, which involves harrowing stories of people traversing the Venezuelan border in hopes of a better life. A deeply religious people, they believe in God more than in their own government. Faith is not an option, but a necessity.

Mora returned to Paloquemao repeatedly to delve deeper into its metaphoric complexities. Say it with Flowers brings together a selection of photographs taken in the market alongside a vitrine containing objects either purchased or found by Mora during his time documenting there, such as religious ephemera, stickers, and pins. Having already established himself as an evocative portrait photographer of the Toronto arts community, Mora follows individuals who are known as “runners:” workers who are hired by farmers to move product around the market. While some portraits are captured frontally and rendered in black and white, similar to the style that he is most known for, other photographs depict the runners with large colourful bundles of flowers that serve as masks, concealing their identities. Their bodies have become vehicles that serve to move large amounts of blooms from point a to point b and perhaps somewhere around the globe. Images of blooms claustrophobically piled on top of one another, flowers in transit, and religious iconography offer powerful visual metaphors that echo the precariousness of home and the lengths to which people will go to acquire it.

Mora explores the strength and beauty of his former home and its realities in ways that contrast sharply with his life in Toronto, where many of the flowers imported originate from Colombia. As constant reminders of the distance he has travelled, the flowers raise difficult questions about what it means to live and work abroad. Instead of struggling to express his feelings with words, Mora says it with flowers. In this way, he participates in the symbolic ambiguity of the flower and all of its emotional complexity.

Mora’s first self-published photobook of the same name will be available for purchase at the CONTACT Gallery throughout the duration of the exhibition.

This exhibition premiers an initiative called The CONTACT Lab, which seeks to highlight projects by Canadian artists discovered during the CONTACT Festival through its various programs. The Lab, an evolving and flexible platform, provides exhibition opportunities to emerging visual artists in the CONTACT Gallery.

Say it with Flowers is a 2019 honourable mention of the annual Burtynsky Grant that offers a $5,000 grant to support Canadian artists and photographers who are at the advanced stages of developing a photobook or publication.

CONTACT fosters and celebrates the art and profession of photography with an annual Festival in May and year-round programming in the CONTACT Gallery.

CONTACT gratefully acknowledges the support of the Ontario Cultural Attractions Fund, Celebrate Ontario, Ontario Ministry of Tourism, Culture and Sport, Ontario Arts Council, The Government of Ontario, Partners in Art, Street Art Toronto (StART), Canada Council for the Arts, the Howard Webster Foundation, Goethe-Institut, the City of Toronto through the Toronto Arts Council, and all of our funders, donors, and programming partners.

Enjoy year-round programming at the CONTACT Gallery, located at the headquarters of the Scotiabank CONTACT Photography Festival.