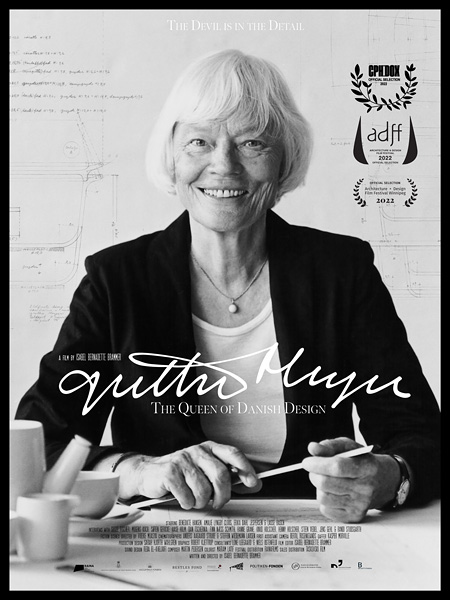 “The story of one of Denmark’s most important designers, what she created, what her obsession with perfection cost her, her brilliant legacy.

For 40 years, the Danish architect and designer Grethe Meyer designed glass, cutlery, vases and textiles and became one of Denmark’s most important designers. Meyer was responsible for classics such as the Royal Copenhagen Blue Edge set, the Firepot stoneware series and a series of modern shelves, designed together with the lover Børge Mogensen. Yet few people outside of design circles know who she was. In interviews with people around Meyer, and in cinematic reconstructions of formative moments in her life, the story is told of a woman in a man’s world whose functional designs for the home are still used today. But the story of Meyer is also the story of a perfectionist and demanding workaholic who strove for precision and simplicity.” (Credit: CPH:Dox)

Celebrating Giving Tuesday, this is a fundraising event to raise awareness for the decorative arts community in Canada. The screening will be followed by a Q+A with Dr. Michael Prokopow and director Isabel Bernadette Brammer. Doors open at 6:00pm.

Isabel Bernadette Brammer holds an MA in Film Editing from the National Film and Television School in the UK and has over 20 years of experience working in the film and television industry in her home country of Denmark. During the past 12 years her passion has been editing feature films and being involved in the creation of many large documentary hybrid series.

In 2016 she inherited the rights to Grethe Meyer’s design portfolio, when Grethe’s daughter passed away and Isabel has now embarked on a mission to raise awareness of the proud design legacy while continuing her work in the film industry. ‘Grethe Meyer – The Queen of Danish Design’ is Isabel’s debut feature documentary.

Dr. Michael J. Prokopow is is an historian and curator. His areas of expertise include material culture, design and architecture, cultural theory, and curatorial practice. He has published widely on aesthetics, craft and modernism. Most recently, he completed a study of a house designed by Canadian architect Arthur Erickson for Vancouver artists Gordon and Marion Smith. In 2016, he co-curated with Dr. Rachel Gotlieb the critically acclaimed traveling exhibition “True Nordic: How Scandinavia influenced design in Canada.” He is currently working on a survey of contemporary domestic architecture in the Pacific West (housing in Oregon, Washington, and British Columbia) and a monograph on the practice of British artist Hurvin Anderson. In addition, he is also working on a study of middle-class taste in North America between 1940 and 1975.

Michael serves on a number of non-profit boards, including the Arthur Erickson Foundation, C Magazine, and the editorial board of Studio: Craft and Design in Canada. Previously, he served on the boards of the Architectural Conservatory of Ontario and Craft Ontario. He is a faculty member at OCAD University. He holds a Ph.D. from Harvard University.

The CSDA/CCAD thanks Hot Docs Cinema for their support in hosting the first CSDA/CCAD movie night.

Note: All donations to the Giving Tuesday CSDA campaign help with our overall programming and general operational support. The Society is managed with the generous support of volunteers. Tax receipts are issued for donations of $20.00 and higher.

If you have any questions contact Gilles Latour at gilleslatour@csda-ccad.org or 416-910-7849.

The screening is sponsored in part by: