Mystery and Sound in The Landscape
@ The Tree Museum 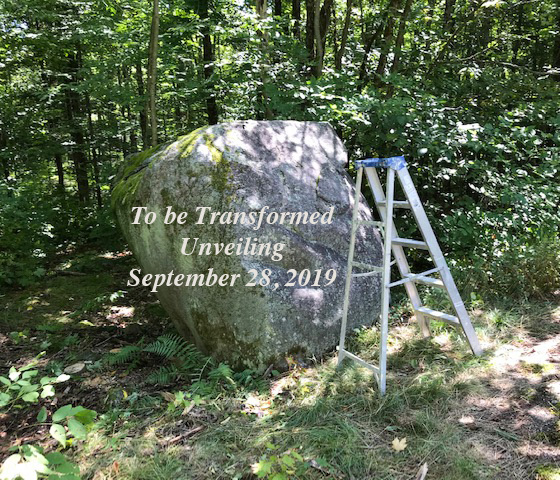 Tracing the Mystery By Deeter Hastenteufel

Artist will be Present: September 28 and September 29, 12noon to 5pm
Part of Cultural Days in Ontario

“Tracing the Mystery” with this work Hastenteufel fuses two separate but related concepts. The carving of an erratic rock from the pre-Cambrian era (Canadian Shield ) into an Olmec head (pre-Columbian civilization), and the concept of bridging the history of the land in Canada, to the history of an ancient civilization in Mexico.

On the grounds of the Tree Museum which is part of the Canadian Shield, we find Erratics. “Erratics” take their name from the Latin word errare (to wander), and are huge Granite boulders that are carried by glacial ice, often over great distances for hundreds of kilometers from their source to their present resting place. Like the Olmec heads, Mayan temples and the Heads from Easter Island, they have an air of mystery! Hastenteufel has spent many years studying ancient civilization, their art, buildings, sculptures, symbols and hieroglyphs. Intrigued by the power and the mystery of their surroundings, their fabrication, production, transportation, placement, meaning and purpose.

Along side the sculptures, buildings, and architectural objects are the hieroglyphics. Hastenteufel’s interest in Semiotics has led him to ponder linguistic evolution and the invention of script . Many hieroglyphs were used in a purely pictorial way, a graphic language rather like the present day emojis or way-finder symbols, that we are familiar with in architecture and urban planning, globally. Historically, way finding was a technique used by travelers over land and sea to find relatively unmarked routes. A system of communication that has traveled across time and cultures.

In “Tracing the Mystery” Hastenteufel has incorporated “hieroglyphs” or way finding symbols of our time into the facsimile of the Olmec helmet. Familiar symbols such as; WiFi, Bluetooth, Loudspeaker, Delete, Barrier-free, Security, Surveillance, , etcetera. These symbols, (carved and imbedded in the rock), will sparkle like stars connecting the past to the presence, becoming future fossils. DH

Deeter Hastenteufel, (born in Basel/Switzerland) is a multi-disciplinary multimedia artist and Canadian citizen. Throughout his career he has worked with stone, wood, steel, clay, sand, gravel, water, fire, glass, Neon-light, waste material and found objects. He is a sculptor, painter, video and performance artist ! Placing him in art history terms might be a challenge, he is not easily put into a box. Although he is definitely a contemporary inventor of new moulds. He oscillates between constructivism and the surreal. Hastenteufel shows Nationally and Internationally, and has shown frequently with the collective “Tranart” in Germany and Canada.

The Sound of the Landscape
Performance by Yves Jarvis & Romy Lightman

With this performance, Romy and Yves express their connection to each other and the land at the Tree Museum (in which both parties have spent significant amount of time) through the medium of traditional folk/country music and field recording

Romy Lightman is a Montreal based singer-song writer, visual artist and poet has been an active participant in the Canadian musical/art scene since 2008.

The site is not wheelchair accessible.
To see most of the art, you have to climb up rocks.
There is no traditional Museum Building.
The sculptures are in the woods and on the rocks.
This is a hike in the woods. The path is uneven.
Bring water. There are no washrooms; there is an outhouse.
There is no admission charge.