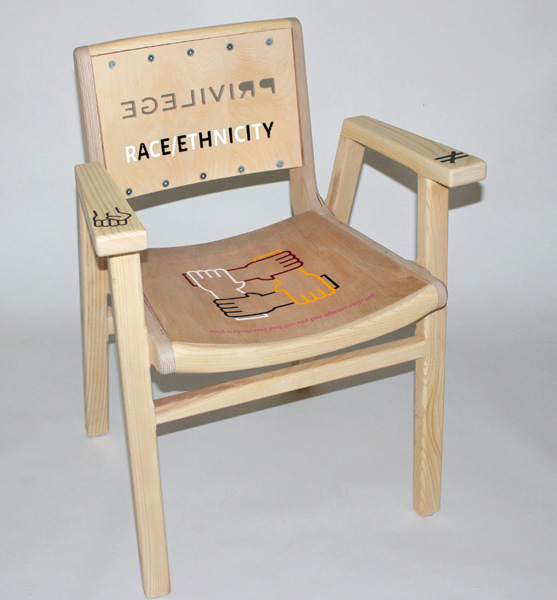 the Seat of Privilege for Race

Art can be a lever to change culture and David Ferguson has taken this challenge literally. His work presents text and symbolic components on finely crafted furnishings to talk about cognitive processes and especially about power and privilege.

There are seats at a table which has runner like feature inscribed with a multitude of names of senses. That table is supported by forces identified on the legs as: gravity, entropy, radiation and consciousness. There are eight comfortable chairs- Seats of privilege – that are decorated with the names and attributes for the privileges of: economy, force, sex/gender, caste/class, wealth, social, faith and race. Timepieces and mirrors with inscriptions and motion activated containers are on the gallery perimeter to continue the enquiry.

Seats of Privilege at Tabula Rasa

Using a chair has been historically and sometimes exclusively the privilege of the powerful. When others sat they were on the floor or ground and sometimes benches or stools. Queens have thrones, directors have director chairs, and administrators have their chairs behind desks. Who hasn’t approached a desk and remained standing in communication with the seated individual behind that desk? Even in a conventional dining room arrangement the head of the table generally features a more imposing chair. Status, wealth and privilege continue to be denoted by the seating arrangements and the quality and design of the seats.

Private viewings of up to six people can be booked for a power breakfast or power lunch on Thursdays. Regular gallery hours are Friday to Sunday 11:00 to 4:00. For the private functions the SunRun cafe provides the menu and the proprietors of the gallery the service. The artist is in attendance to talk and answer questions and to facilitate conversation. 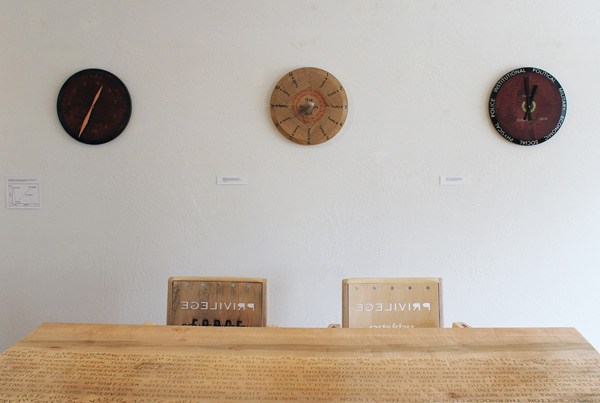 After graduating from Ryerson’s media studies program, David Ferguson exhibited photography in Canada’s public art galleries. He was concerned with the nature of representation and meaning, then with a desire to understand why we were changing the environment and climate as we were. Still life/tableau photography was his medium. While he stopped making photographs for awhile he continued to work in Toronto galleries as an installer. After moving to a semi remote area in Bancroft to build an off grid passive solar home, studio and workshop, he became involved with the Art Gallery of Bancroft. David was instrumental in the considerable growth of that organization for 8 years and served as the president for a 2 year term. During this same period he was practising the craft required to make things of wood. For 5 years this work was exhibited on the Bancroft and Area Studio tour. David was challenged to make woodwork more expressive and now finds that by using text and design elements he can literally address some of the issues he approached with photographs. The influences of artists: Phil Bergerson, Garry Knox Bennet, Gord Peteran and Stephen Hogbin and contemporary thinkers ; Daniel Kahneman, Yuval Noah Harari and Nassim Nicholas Taleb are informing his work now. Using installations of the furnishing based art he is making allows him to more effectively present the ideas and concepts and questions he encounters. 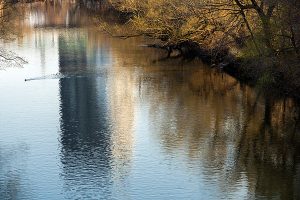