Bill Burns: The Salt, the Donkey, the Goats, the Milk, the Honey 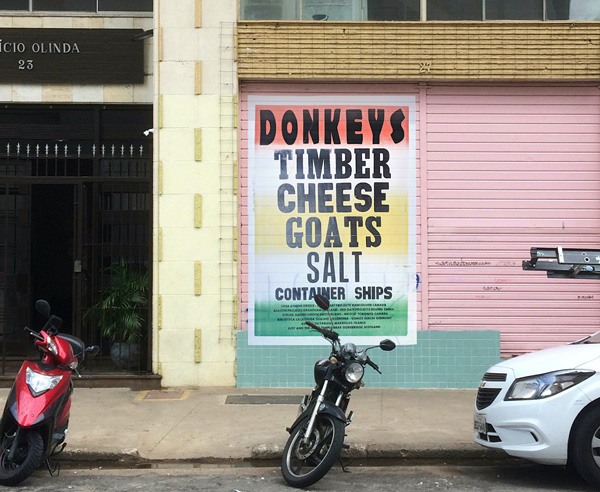 Bill Burns’ project is in two parts. The first is an exhibition and the second is a performance.

The Salt, the Oil, the Milk is an exhibition of notes, drawings, paper models as well as documents and pre-documents. It is on show at MKG127 in Toronto until October 9. More information about the exhibition can be found at mkg127.com.

The Salt, the Donkey, the Goats, the Milk, the Honey is a performance that will unfold at the Oculus Pavilion in Toronto’s South Humber Park, along the Humber River Recreational Trail on Friday, October 8, 2021, from 1:00 to 4:00 PM. (rain date: October 15, 2021). The performance includes a procession of musicians, goats, farmers, beekeepers and a donkey. The musicians play songs about milk, honey, donkeys, container ships and campfires. At the end of the day, Bill will mix the milk and honey and salt together. He calls this “The Mixing of Milk and Honey and Salt.”

Bill began his long-duration performance, otherwise called The Great Donkey Walk or The Great Trade at Amden, Switzerland, in September 2018. With the help of two donkeys, he carried salt from the local salt mine up some gentle slopes in the Swiss Alps. On the way up the mountain, he traded some salt for apples at the orchard, then he traded apples for honey at the beekeeper’s house. At the top of the mountain, he served apples drizzled with honey and a pinch of salt. 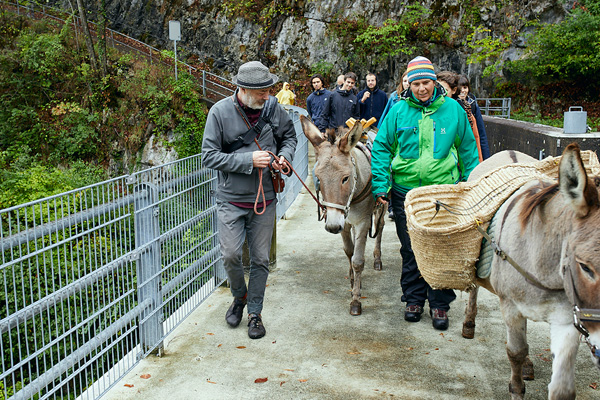 GENEROUSLY SUPPORTED BY: The Canada Council for the Arts, The Ontario Arts Council and Alfred Richterich Stiftung 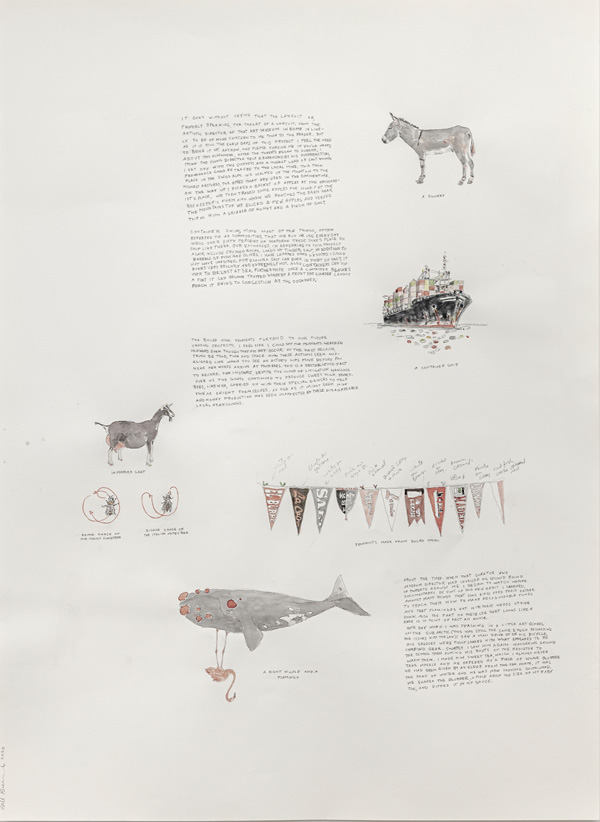 The Donkey, the Whale, the Container Ship, The Bee Dance, 2020. Photo: Toni Hafkenscheid

A FEW MORE NOTES ABOUT The Salt, the Donkey, the Goats, the Milk, the Honey
Bill Burns’ long-duration performance is part of a five-year cycle. First, a load of salt is acquired in China. It is hauled by sea and rail to the Port of Vancouver and onward to Newfoundland. He trades the salt for a trip of goats (perhaps three or four). He sets off from Newfoundland by sea via Liverpool to Greece, then Egypt, followed by Lebanon, Georgia, Turkey and Slovenia before returning to Canada via New York. In each instance, Burns deploys a different conveyance to move or trade dry goods, foodstuffs, or livestock. It goes like this: After the business of arranging and transporting the trip of goats from Canada to Greece via England he trades them for a load of raw honey. By and by, he departs Greece, with a vacuum-sealed container load of honey, bound for Egypt. Upon receiving his moorage assignment at Alexandria, he haggles for several days, finally reaching a deal for an exchange of honey for base metal. Once he has made a honey for metal swap, he arranges shipping through changeable waters toward Lebanon. Now in Beirut, he exchanges the base metal for olives. From Beirut, Burns conducts his cargo through swarms of traffic to the Bosporus, passing through by barge and tug, then continuing to the Black Sea port of Anaklia, Georgia. Sliding into a slip at Anaklia, he negotiates a trade of olives for timber. He hurtles back toward Turkey with an impressive load of timber. He barters for tree nuts and black pepper. The load of nuts and peppercorns is now bound by truck for Slovenia, where he trades for honeybees. From Trieste, he transports the bees to Argentina. Now in Buenos Aires, he exchanges the bee colony for boiled wool. Finally, he finds himself destined for New York City with a half dozen bales of boiled wool, first by rail, then by sea. And on it goes. 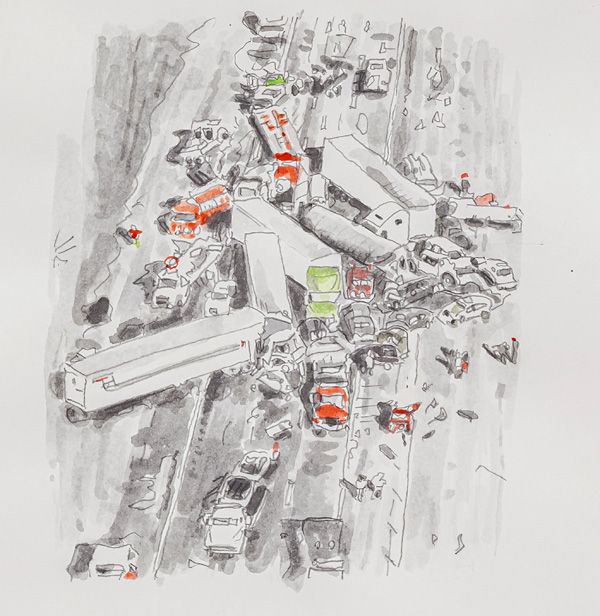 Bill Burns’ work has been featured in solo exhibitions at the ICA, London, the KW, Berlin and MOCA, Toronto, as well as in thematic shows at the Museum of Modern Art, New York, Seoul Museum of Art, Seoul, and the Stedelijk Museum, Amsterdam. His works are included in many collections including Kunstmuseum Liechtenstein, Vaduz; Tate Britain – print and book collection, London; the Getty Center, Los Angeles; and the Cabinet des estampes, Geneva. His artists’ books and essays include Bird Radio, Verlag der Buchhandlung Walther Koenig, KWAG, KW Institute for Contemporary Art, 2007: Cologne, Waterloo and Berlin and A Guide to the Flora and Fauna Information Service, Institute of Contemporary Arts, 2008: London, England. A boxed edition called Three Books About Plants and Animals and War was published by Verlag der Buchhandlung Walther Koenig 2011: Cologne. Hans Ulrich Obrist Hear Us, a memoir about Bill’s life as an artist, is published by YYZ BOOKS and Black Dog Publishing, 2015: London and Toronto and The Power 100 Meta List is published by Mark Pezinger Verlag, 2018: Vienna. Bill lives in Toronto.