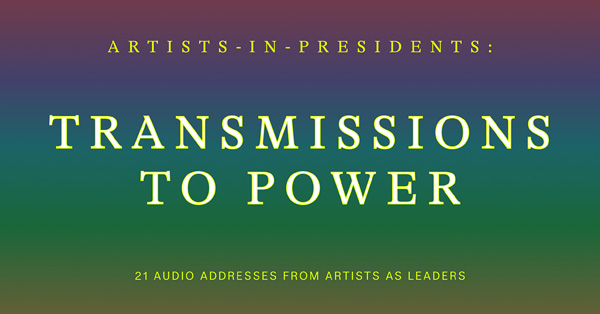 Twenty-one audio addresses and presidential portraits from artists as leaders
Released every Friday from August 6–December 17, 2021
Available at ArtistsInPresidents.com and BlackwoodGallery.ca
Subscribe to the podcast on Apple Podcasts, SoundCloud, and Spotify

Who has the power to reimagine leadership? What would it look like if artists assumed authority over our collective future? What if we all joined in this mission?

Artists-in-Presidents: Transmissions to Power invites artists, activists, public intellectuals, and writers to radically reimagine political power and possibility. An international assembly of 21 contributors have been called upon to create audio addresses that position themselves as world leaders who speak directly to the people, describing their vision for the future and how we get there. With support from professional photographers, each artist has also created a “Presidential Portrait,” embodying the kind of leadership they wish to bring into being, and subverting conventions of presidential portraiture. Together, they compose a rousing collection of imaginative proposals for the leadership we need in this moment of crisis and possibility.

Inspired by Franklin Delano Roosevelt’s Depression-era radio broadcasts called the “Fireside Chats” as a framework for speaking frankly and directly to the people, Artists-in-Presidents replaces the one-man hero story that plagues our histories and governing bodies around the globe, and complicates calls for unity by asking, “What messages do we need to broadcast to our nation(s) and relations now?” 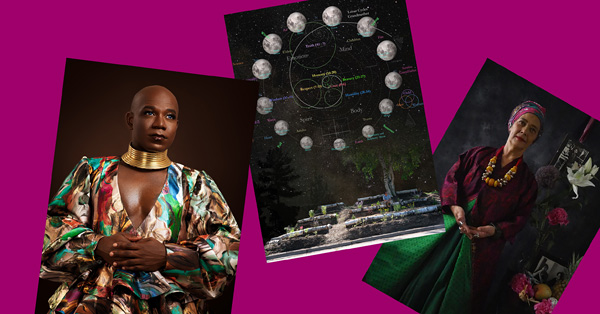 Today, human and non-human citizens of this Earth are faced with the disastrous social and environmental fallout of global capitalism and settler colonialism, with the COVID-19 pandemic only compounding the existing disparities in our community. During this period of political rupture, economic downturn, and global uncertainty, this project brings together a polyvocal chorus of visionaries from across Turtle Island, England, Bahrain, Brazil, France, Germany, Mexico, Indonesia, Afghanistan, India, and Lebanon. Artists-in-Presidents: Transmissions to Power addresses interlocking urgencies: environmental crisis; the ongoing effects of war; the alienation of people from their governing structures; the necessity of healing ongoing traumas; and international movements for Black lives, Indigenous sovereignty, LGBTQ2S rights, open Internet, and disability justice.

Artists-In-Presidents audio transmissions are free, released via a dedicated website at ArtistsInPresidents.com, at BlackwoodGallery.ca, and as podcast feeds available on Apple Podcasts, SoundCloud, and Spotify. ASL interpretations of each audio address will be available, as well as text transcriptions.

Listeners are invited to create their own presidential addresses and share their visions for the future and new modes of leadership on social media, using the hashtag #ArtistsInPresidents.

Constance Hockaday is a queer Chilean-American from the US/Mexico Border. She is a director and visual artist who creates immersive social sculptures on urban waterways. She has worked with the Floating Neutrinos since 2001, and collaborated with Swoon’s Swimming Cities projects, sailing floating sculptures along the Hudson, Mississippi, and the Adriatic Sea (2006-09). In 2011, she created The Boatel, a floating art hotel in New York’s Far Rockaways made of refurbished salvaged boats—an effort to reconnect New Yorkers to their waterfront. Her 2014 piece All These Darlings and Now Us highlighted the displacement of San Francisco’s queer community: more than 1000 people watched peep show performances on a raft of retrofitted sailboats featuring artists from two recently shuttered iconic queer businesses. Hockaday holds an MFA in Social Practice and MA in Conflict Resolution. She is also a Senior TED Fellow and an artist-in-residence at The Center for the Art of Performance at UCLA.