Despite being a proponent of the indispensability of art, I occasionally find myself wondering if there really is a point in making it when the world feels flooded with urgent problems. Vende tela, compra terra, currently on display at SBC Gallery, is a reminder of art’s power. 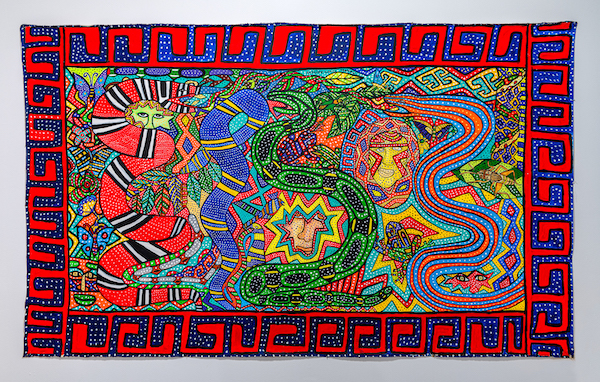 The walls of the gallery are decorated with large, mural-like canvases hung directly on the wall without any stretchers. The only frames these artworks have are painted on, repeating patterns with the same black linework and planes of bold colors as the paintings they contain. Visually dense, each painting is a plethora of different elements pulling eyes around its surface to-and-fro, from people, snakes and other animals to trees. Like the rainforest itself, they are a variegated space that truly opens up upon closer and more patient inspection.

At first prominent, then blending into the environment, audio plays on loop over a not-so-loudspeaker, consisting of insect noises overlaid with a man’s chanting. The familiar  ambient bugsong immediately conjures rainforest memories. The chants are huni meka, part of Huni Kuin cultural practice, an indigenous peoples living in Brazil and Peru. For the Huni Kuin, ayahuasca is not only a part of spirituality, but is inextricably tied to the preservation of themselves and the land, and is often used in conjunction with chants to help facilitate mirações (visions). Used to evoke varying sights and sounds, huni meka are “in the language of the boa” and aid in accessing yuxin (beings one may otherwise be unable to experience) . As one didactic vinyl relays far more succinctly than I could, “the transportation to another medium [visions to painting] not only facilitates remembrance and apprehension but also multiplies the chants’ forms through translation.”

The exhibition’s title, Vende tela, compra terra, refers to what MAKHU (Moveimento dos Artists Huni Kuin) has done with their paintings’ profits. Translating to “sell art, buy land.” MAKHU did exactly that in 2014, purchasing ten hectares of land, which has since been used as a base for the preservation and dissemination of Huni Kuin knowledge, as well as a means to protect the forest itself. 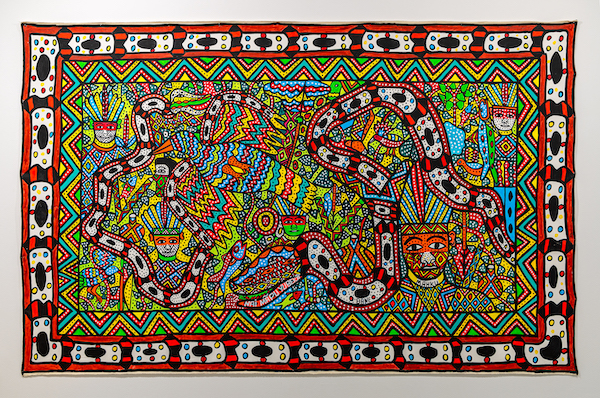 As I moved through the gallery, I began to question my way of viewing the work. Entering the exhibition knowing my end goal was a review made me seek “answers” in the work, something concrete I could write about without “messing up.” I wanted to try to read the work like a codex. I often talk about decolonizing our way of viewing, but was I?

One of my companions remarked unprompted that they viewed the work from a feeling perspective rather than an analytic one, and they enjoyed the show. I wanted to look that way as well. One thing to quickly draw my eye’s delight was a misplaced drop of electric green paint on one of the canvases. Nearby was a stuck piece of fluff, small smears, and hairs. It didn’t seem like carelessness to me. Instead, these “mistakes” helped me read the work. It was painted while vertically hung, with black lines applied before the color fields. These small “flaws” help to communicate the method behind the art: the artist was concerned not with the perfectionistic goal of immaculate work, but an expressive effort to capture the essence of something ephemeral. They feel more like acts of preservation or translation than something meant to be refined until perfection. That said, and from this new perspective, Vende tela, compra terra approaches perfection both artistically and decolonially.