the cut, the tear & the remix at the McMaster Museum of Art & Nia Centre for the Arts, online

As a virtual exhibition, the cut, the tear & the remix: contemporary collage and Black futures seizes the circumstances of ongoing gallery closures as an opportunity to invent a space that breaks with the white cube in favour of Afrofuturist magic. Free floating in star-dusted darkness at a cool digital remove from the embodied world, this space-faring vessel for art is itself a speculative artwork for imagining fresh territories for Black creativity.

Curated by Stylo Starr during her curatorial internship with the McMaster Museum of Art in partnership with Toronto’s Nia Centre for the Arts, the cut, the tear & the remix focuses on collage (a medium in which Starr has carved out a formidable reputation as an artist) as practiced by eight artists of the African and Caribbean diaspora who now live in Canada. In their widely varied hands, collage becomes a potent signifier of separation and removal that equally evokes the migrant experience. 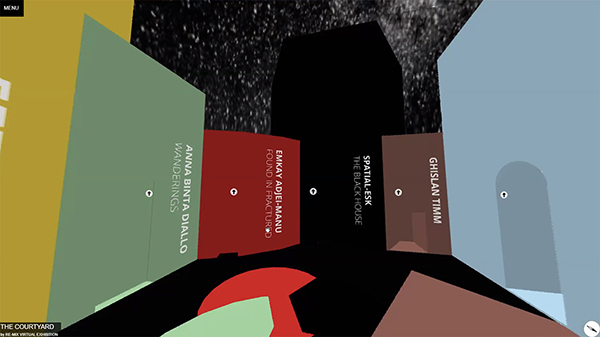 This virtual vessel, created by participating artist SPATIAL-ESK, is an architecture of intersecting shapes rendered as eccentric planes floating in space that create a wonderfully impractical environment with rooms rendered in flat colours coded to each artist. Floors and ceilings are largely absent, exposed to the cosmos beyond this conceptual container.

Simple click and drag motions enable highly individualized movement through these exhibition rooms. My fingers on the tracking pad achieve what my feet used to do. I can sweep a room from a distance or venture closer to scrutinize a single work at angles distorted by my subjective viewpoint. The loss of tactile fidelity in these digital reproductions of handmade collages is well compensated by this exploratory dynamic – an experience far more compelling and evocative of the galleries I miss than clicking through a slideshow.

Rooms expand and contract to accommodate the needs of their art and are marked by individual quirks such as the fuchsia pattern that curves through Kofi Oduro’s temple to hypertext as fluid matter for live performance. Yung Yemi’s intricate digital collages are presented in a virtual space that is made small by the limited scope for zooming out from the works. Instead, the viewer is held close to these monumental images, encouraged to lean into their plurality of opulent references that simultaneous entrap and shield their Afrofuturist subjects in armored decadence. FEZA’s contributions are presented in similarly close, sun-yellow quarters that cradle the intimacy of her photographic images, presented in tenderly cropped pairings that ache with absence and nostalgia. 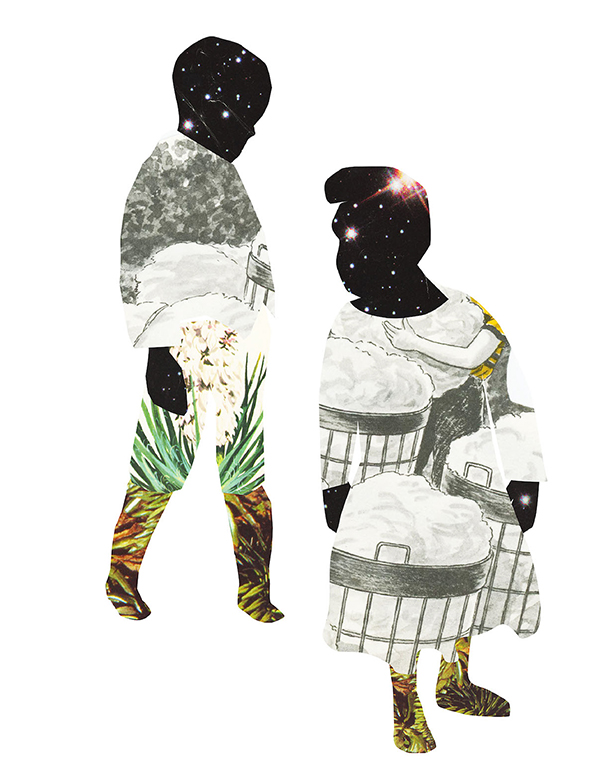 Anna Binta Diallo’s large figures retain some sense of their physical scale by stretching to the full height of her mint-green space. They are predominantly cut from images of expansive space, from maps and mountain ranges to starfields that appear to punch through the virtual walls and join the exhibition’s surrounding cosmos. In this rare context, her works become portals as well. Emkay Adjei-Manu similarly mines the negative spaces of collage with deceptively simple strategies that cut an image of fishermen away from their flat grey sky; separating these two halves opens an orange vista of fencing layered beneath, their negative space now a fiery echo.

SPATIAL-ESK’s The Black House uniquely addresses this virtual space with a dramatic architectural frieze that floats like a layered diorama in endless starlight. Greco-Roman porticos duplicate and layer themselves as an oppressive barrier that recalls the neoclassical aspirations that have spewed forth from the White House’s previous inhabitant, while a myriad cast of characters arrayed on its tiled grass lawn complicate our reading of who holds power over this realm. 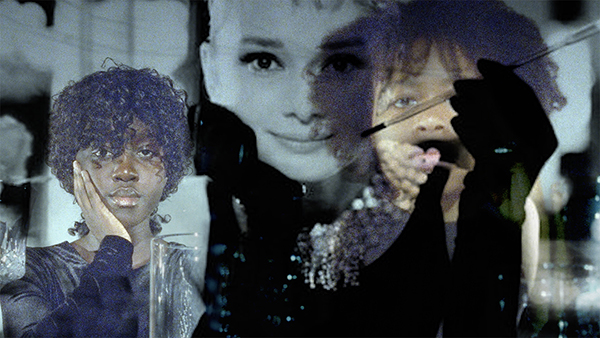 This revolutionary space has its technological limits. Works by Sonya Mwambu and Ghislan Timm appear as static images in their exhibition rooms but require the viewer to return to MMA’s website to view their films and GIF respectively. While Timm’s black orpheus (ii) offers a playful wink to its process in GIF form, her collage is far more at home in its warm terracotta gallery – a space more intricate than most, with fluted columns that heighten the spare elegance of her compositions.

Mwambu’s two short films extract content from Kodak test photographs and Hollywood movies to situate the words and actions of Black thinkers and creators in possibilities that rise above white supremacy. The Shirley Card references the image of a white woman historically used to calibrate colour film, with inevitable shortcomings for the accurate representation of darker skin tones. By superimposing Black actors in richly layered montages spanning Gone with the Wind to James Bond, Mwambu recalibrates our filmic imagination to find recognition and new ways of becoming.

Of the three verbs employed in Starr’s curatorial premise, the remix is where transformation resides. “The future of the Negro in this country is precisely as bright or as dark as the future of the country,” says James Baldwin in a 1963 interview that plays through Mwambu’s On Embracing the Stranger as a stinging indictment of white supremacist thought in shaping America’s past and ongoing crimes. Against that harrowing history – one in which Canada is undeniably implicated – these artists have carved away and collected those brightest fragments of life and meaning, discarded the rest, and reassembled dazzling futures in a cosmic space where freedom thrives.

the cut, the tear & the remix: contemporary collage and Black futures continues until July 22.
McMaster Museum of Art: https://museum.mcmaster.ca/
Nia Centre for the Arts: https://niacentre.org/