Crip Rituals and Resistance in the Art World 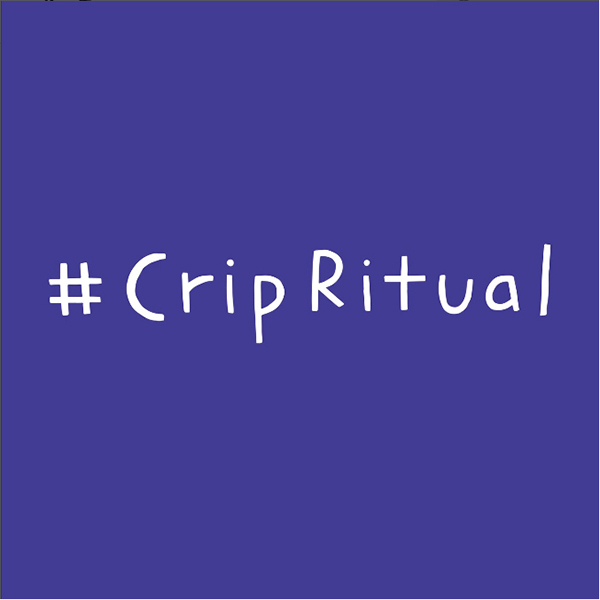 [Purple square with the #CripRitual handwritten logo text (by Shannon Finnegan) in white.]

On display at the Doris McCarthy Gallery and Tangled Art + Disability until April 1, #CripRitual is an expansive group exhibition that looks at disability culture through a wide variety of ritualized practices. In the words of the curatorial team Critical Design Lab, the exhibition “highlights strategies for building crip power.”

Flaherty and Haagaard, along with artist RA Walden and moderator Eliza Chandler, will be speaking as part of an online panel on Negotiation and Resistance on March 1.

What is a crip ritual that you’ve either created or learned that is specific to the art world or your art practice?

Cassandra Hartblay: As a co-curator for #CripRitual, I was drawing on so much past work in disability arts to imagine how to curate an exhibition like this. From curator Amanda Cachia and our colleagues at Tangled Arts, one very simple crip ritual that we drew on is to hang artworks lower on the wall than the industry standard, which imagines a standing person of “average” stature, but is typically too high on the wall for comfortable viewing for many folks.

From my past work many years ago as a gallery assistant at Interact Studio in Minneapolis, and from my co-curator Aimi Hamraie’s design practices, I brought with me the crip ritual of listening and interpreting slowly. The typical art-market can be very fast-paced and demands of artists a capacity to translate their work into written or verbal descriptions of its meaning, purpose, and value. Whose voices get left out? Our exhibition was interested in crip rituals, and those rituals, by definition, often resist norms of productivity.

Jarah Moesch: There is the crip ritual of embracing gross motor control. The more I use a set of muscles repetitively, the less they “work”, so those muscles need to rest (and resting can be a for few minutes or a few days or sometimes longer) until I can use them as well again. This means that when I enter my studio, I take a deep breath (if not physically able to do so, then in spirit) and center the broad strokes, the textures, the fluidity of motion, rather than the precise details. This has also changed my work! I do less detailed sketching, more rough doodling, and my painting and design work has changed stylistically as well. 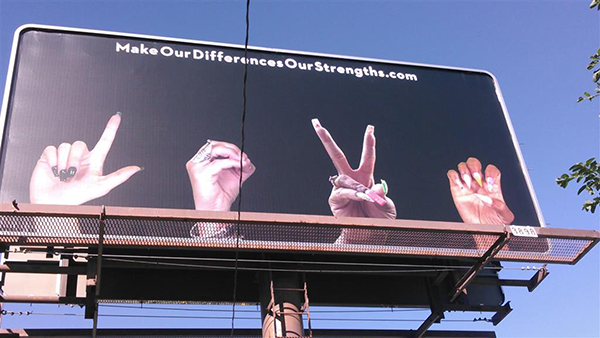 [Photograph of a highway billboard with four hands spelling out the word “LOVE” in ASL and the words MakeOurDifferencesOurStrengths.com along the top.]
Fran Flaherty, LOVE, 2020, billboard

Fran Flaherty: I start my conversations with a comical statement: “Please speak slowly and clearly. I am Deaf and I wear two hearing aids because I can’t wear three unless I was Stelarc.” I get two different reactions, one is of laughter and the other one is usually someone rather mortified with my joke. The reference to Stelarc usually starts a conversation about art and the body. Stelarc is famous for his art practice about the human body being obsolete. I then go one to explain that I narrated this same joke to Stelarc (who had an implanted ear cartilage in his forearm with a mic which he “talks into” thereby talking to himself) when I met him while I was at Carnegie Mellon. Usually, the conversation begins to take shape and becomes less uncomfortable. 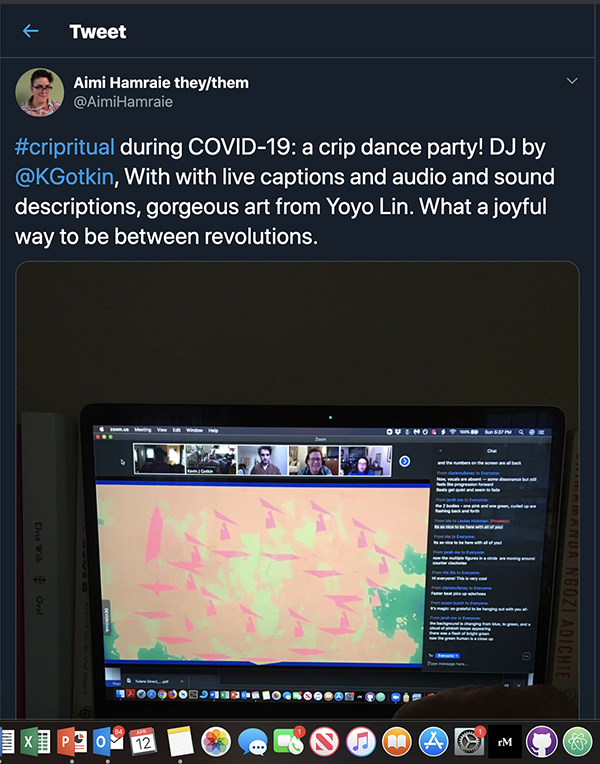 [Tweet by @AimiHamraie they/them says “#cripritual during COVID-19: a crip dance party! DJ by @KGotkin, With live captions and audio and sound descriptions, gorgeous art from Yoyo Lin. What a joyful way to be between revolutions. The tweet includes a photo of a laptop screen set up on a bookshelf with books visible behind it. On the screen, a Zoom call shows neon abstract shapes on a highlight, with a row of faces at the top. On the right, the chat screen is open with lots of text.]

Aimi Hamraie: In beginning in March 2020, I worked with Kevin Gotkin, Louise Hickman, Yo-Yo Lin, moira Williams, and other disabled artists to organize a series of disability-centric online dance parties called Remote Access. These parties incorporate access-making as both an aesthetic and ritual practice. Access doulas describe images and sound, while ASL interpreters and CART providers provide access to language. Participants also describe their own on-screen images, show art and images, and engage socially, all while DJ Who Girl (Kevin Gotkin) plays their set. We have incorporated spells and rituals into the event, as well. 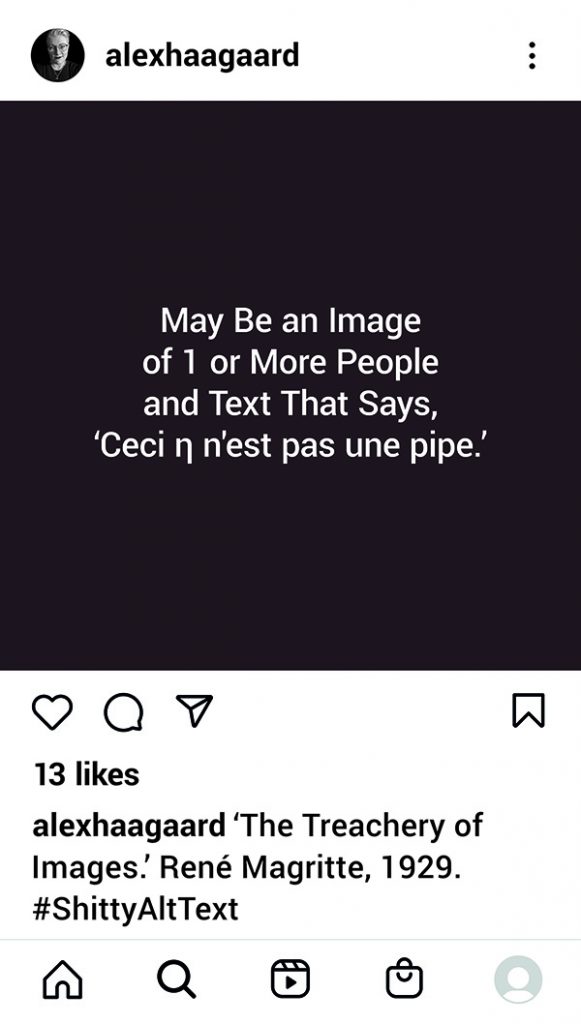 [An Instagram post, viewed on a smartphone. White text in a system font centred a square the colour of light reflecting dully off an ebonite pipe stem. The text reads “Ceci η N’est Pas Une Pipe.” This is the alt text autogenerated by Instagram in November 2021 for René Magritte’s painting The Treachery of Images.]
Alex Haagaard, #ShittyAltText: The Treachery of Images, 2021, digital image

Alex Haagaard: Along with my thought partner Liz Jackson, I am a founding member of the disability-led design collective The Disabled List. Earlier this year, we had the opportunity to work with North York Arts creating image descriptions for their Northbound series of emerging artist exhibitions, and to create an accompanying blog post documenting our process and what we learned about how to create effective image descriptions for works of visual art. Liz and I had both been intrigued for a long time by the idea of treating image descriptions as a creative form in and of themselves, and of course other disabled artists and writers have been experimenting with this concept as well – lately I’ve really been enjoying the descriptions that The Cyborg Jillian Weise creates on Twitter. This was the first opportunity Liz and I had to really dedicate time and attention to this idea, to do it in a meaningful way, and I have found that I have since become freer and more expressive in writing all of my image descriptions.

What is an experience that you’ve had resisting or negotiating ableism in the art world?

RA Walden, A Primer on Working With Disabled Group Members for Feminist / Activist Groups and Organisations, 2018, 12 page, A4 risograph publication.

Cassandra Hartblay: In so many cases, access is built into shows after the fact, and it shows. We’ve worked to envision accessibility at every phase of this project.

Fran Flaherty: My resistance to the art world usually has to do with access. The art world is ready to accept outsider art, disabled art, and has been doing so for many decades. It is when you suggest the need for access and inclusion where I get push back. My requests for ASL interpreters or close captioning fall on deaf ears (pun intended) and the rationalizations start flowing out. The other push back I get is when I describe my work as Deaf and disabled art. It seems the subject is easily enough appreciated (exploited) as long as I don’t describe it as disabled art or if I do, then it is used as inspiration porn.

Aimi Hamraie: As a neurodivergent person, I found some aspects of curatorial work challenging because it requires a lot of coordination and project management, collaboration, tracking details, and social interaction. But I was lucky to work with a great team of co-curators and gallery staff who made the process easier.

Jarah Moesch: I have not tried to submit artwork anywhere recently, and haven’t been anywhere since before the pandemic, so I can’t answer your question with anything current. Instead, I’d like to point towards both Tangled Art and the Doris McCarthy Gallery as exemplars of what is possible: from access in physical space and online events, to working with us (the curatorial team) and our artists to ensure that access is central to the work itself as well as how people experience the process and outcomes of the exhibition.

Alex Haagaard: The art world, even the disability art world, is held together by networking. To get anywhere, you really have to know people, which means you need to make a point of getting to know people, which means you have to go to events and socialize and do sustained small talk over months or years, which means you have to have the temporal budget to get to certain places at certain times and to spend time on things that aren’t directly connected to your day-to-day survival. It also means you need to have the instinct to just reach out to people casually and talk to them about…I don’t know what because I do not have that instinct. Something other than, “Hey, here’s this specific concept I’ve been thinking about lately, and I’d love to send you a text wall about it.” You have to do other conversational stuff first to get to a point where anyone would give enough of a shit to pay attention to the text wall, and you have to do that other conversational stuff strategically with people who have the right power and the right connections within the art community so that when you finally do send them that text wall (or, preferably, that portfolio) they can hook you up with the right opportunities.

I don’t do that. I can’t do that. It’s just not in me. I wrote a piece last year called “Notes on Temporal Inaccessibility” that talked about how impossible it is to engage in synchronous events when you deal with an energy-limiting disability. I’m also Autistic and, I suspect, schizoid although there’s zero chance I’ll ever get that accredited by the clinical gaze because that would require actually engaging in a sustained process with a psychiatrist and, absolute truckload of medical trauma I carry with me at all times aside, that just ain’t the schizoid way. But the point is, it takes me literally years to get to the point with a person where I feel close enough that I develop the instinct to talk to them spontaneously and, even when I do, the things I know how to talk about are not the things you talk about when you’re building collegial relationships. And I only ever have the energy to keep that kind of thing up with maybe three people, maximum.

My ideas and my work haven’t particularly changed in the four years since I was housebound, unstably housed in rural Ontario, getting rejected from every show or fellowship or lit mag I applied to. What has changed is I began working with Liz, and we built a friendship after a year and a half of working together, during which I became comfortable with her because working together allowed for info-dumping and she was never put off by that. And Liz’s expertise is in branding and marketing, which means she’s incredibly skilled at networking and at selling ideas, and she has advocated for me and my work in ways that I just can’t.

We talk a lot about the importance of community and I don’t disagree with that, but something we need to talk more about is how the ways we construct communities are often incredibly inaccessible, and they’re inaccessible in ways we tend to ignore or not even to notice, because we’re really accustomed to thinking about accessibility in nice, concrete, spatial terms.