The Cripsters: Andy Slater on Visual Impairment and Sound Art 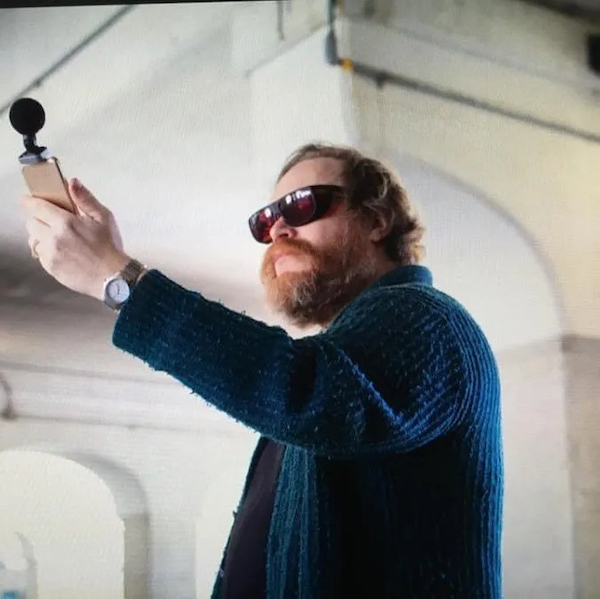 When I was a kid, I used to paint a lot. I’m not totally blind, but my vision has gone away over time. When I was five in 1980, I was diagnosed and then maybe ten years after that, I realized I couldn’t see to paint or draw the way that I wanted to. I didn’t really have an art education. I just drew cartoons and shit. Instead of trying a different style, I stopped and started thinking more about sound. I had a little multi-track cassette recorder and started doing sound collage without really having any reference to musique concrète or any kind of abstract or experimental music. I was just doing it. I moved out to Chicago from Connecticut to go to school. They had a sound department. I learned more about sound and my relationship with sound, being a visually impaired person. That was in the nineties.

I did a lot of field recordings and stuff like that. But I had to stop because all the machines became digital and they had these little tiny menus. You didn’t have tactile function buttons anymore. I kept using analog synthesizers and samplers, and it’s always fun to do that stuff. Some of it’s musical, the majority of it really isn’t. It’s kind of a weird fake alien environments.

Then I realized that with the screen reader on my iPhone, there were some recording apps that actually were accessible. If you got microphones to plug into phone, you could do hi-def field recordings. That’s when I started recording in different spaces. I became more aware of my surroundings, and was finally able to capture the echolocation and sound in a room that lets you know how big the room is, what might be in the room, what the floor, the walls, or the ceiling are made of.

I made a record, a couple installations, and a whole bunch of stuff because it was finally accessible to me. And I realized that it being accessible to me, it could be accessible to other blind people. It was maybe 2015 or 2016 when I went to some of my professors asked about other blind sound artists or composers. And they’re like, well, there’s you and that was the answer. There were some people that I guess were visually impaired. Bernie Krause, who’s done all those nature recordings, somebody told me that he was visually impaired. But there was nobody doing the kind of composition work I was interested in that was blind. There was Rahsaan Roland Kirk, and a couple jazz musicians. But that gave me a kick in the ass. And more blind artists were doing things that weren’t visual, that was tactile or some weird kind of sound or performance. I just started collaborating or working with those people.

I met Jennifer Justice in the Bay Area and a few other blind people through just kind of being like, there are other blind artists. Some people still do ocular-centric work, because they’re able to and they enjoy it. People do film and video and I do some of that myself. But I didn’t want to be the blind photographer or the blind person who paints. I wanted to do stuff that my whole community of hearing blind people could enjoy without it being a dictated experience. Like you go to a museum and somebody is telling you what the art looks like. But if you go and it’s sound, it’s like, hey, we can just experience this without anybody having to tell us what it is or how we should perceive it. We started the Society of Visually Impaired Sound Artists and we had a manifesto.

My blindness informs how I hear. And it’s really hyperactive and weird. My ADHD adds that too. But I would never say I’m doing this to emulate what it sounds like to be blind. I think that’s kind of tacky. I will say, “This is me navigating. People might relate to this.” The blind experience with sound is so unique individually, and also so totally unique from non-blind hearing people. A lot of us can spatialize things differently and identify sound easily or even just have a better way of understanding what some sounds are.

I was twenty or so when I realized I had super hearing. Pauline Oliveros was visiting the sound department and played some stuff she had recorded in caves. Without her telling us how big the space was or how tall the space was, just because the recording was so pure, I was able to judge based on how long the sound reflected and how long it carried on and that sort of stuff. She said, “Holy shit, you’re right.” So that’s when I started thinking more about how acoustics can be part of the art. Alvin Lucier had this piece from the sixties called Vespers where people were blindfolded and they walked around with this little thing that would click and they would use it for echolocation. It’s a cool piece, but it’s also kind of like, how come no blind people have recreated that? My group of friends and I are the only people that would know what it means, and we wanted to have access to these spaces and opportunities. A lot of times, I want to hear what a space sounds like and I’ll just go into it and swing my cane up to the ceiling to see how tall the ceiling is. That’s an access thing. If I can hear what the room sounds like, if everybody would just shut up for a second, then I may not need to be guided.

In 2018, I had to give a performance at the Chicago Disability Cultural Studies Conference. And I was like, I want to do a lecture. I wanted to come up with this idea of how to frame my sound art in a way that’s accessible because I’ve never thought about how my own sound work could be made accessible to people that are deaf or hard of hearing or need sensory accommodations. I started by describing some of my own work. It’s all very abstract and poetic, and I found I was creating these cool texts that exist on their own. It’s like the access can be considered its own piece and be enjoyed even totally out of context.

In Chicago the disabled artist community is really tight and we go to so many lengths to make sure that everybody is invited and it’s accessible for all of us. It’s often where it’s like, we need audio description or image description, even if it’s just on the website for somebody to call it up while a performance is going on if we can’t have it live. Same with partner ESL and text. We have this community which is so supportive. It’s not like any other art scene where there’s competition and all cliquey. I’ve seen this exclusively in Chicago because we do our own exhibitions, but there are galleries that a lot of us show in where it’s not a disability-focused show. We’re becoming more and more invited into that space.

But there’s also a lot more capital for disabled artists these days. You have the Disability Futures Award putting more money into funding disability arts. More people are paying attention. And it’s great to see a disabled artist in a show that’s not about disability. Because we’re not a novelty when it really comes down to it.

[This article was distilled from an interview with the artist.]

Andy Slater is a Chicago-based media artist, sound designer, teaching artist, and disability advocate. He is the founder of the Society of Visually Impaired Sound Artists and director of the Sound As Sight accessible field recording project. His work is include in the group exhibition The Equivalence of Alloyed Gold on display at Critical Distance Centre for Curators in Toronto until November 26.