Truck Contemporary Art’s current exhibition, Taskoch pipon kona kah nipa muskoseya, nepin pesim eti pimachihew, opens through a poetic portal of language and land – two essential grounding elements of Indigenous identity and ways of knowing. Translated into English as Like the winter snow kills the grass, the summer sun revives it, the exhibition focuses on the revitalization of Indigenous languages through work by Joi T. Arcand, Richelle Bear Hat, Susan Blight, Tsēmā Igharas, Michelle Sylliboy and Alberta Rose W./Ingniq. Curator Missy LeBlanc selected the artists from across the country working in their respective ancestral languages: Anishinaabemowin, nēhiyawēwin, Nitsiipowahsiin, Tāẛtān, Uummarmiutun and Komqwejwi’kasikl. Each of their artworks speaks to the act of re-acquaintance with land and language, with relearning or even beginning to learn, but also reawakening the traditional ways of Indigeneity. 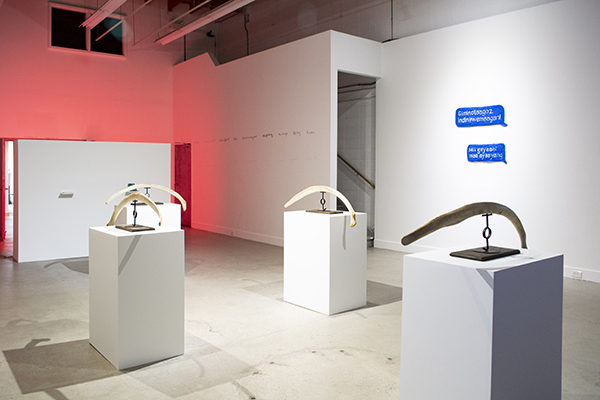 In her opening night performance ilihaqtunga (I Learn), Alberta Rose W./Ingniq wrote in charcoal the words she knows in her mother tongue, Uummarmiutun, a dialect of Inuvialuktun. The corresponding English word was then written in graphite below. Paarutit, Atira, Ingniq are some examples of Uummarmiutun words the artist knows; “Greetings”, “My name is…” and “Fire” (her Inuvialuit name) respectively, followed. Providing the translation speaks to accessibility for both the artist and the viewer, as well as the alienation that language loss causes.

ēkāwiya nēpēwisi (don’t be shy) by Joi T. Arcand, part of the artist’s Wayfinding series, continues her interest in bringing cahkipēhikana (Plains Cree syllabics) into the settler context and landscape. Wayfinding is a form of orienting oneself in physical space. Arcand uses this concept and takes it a step further, providing space for the Cree people to find their way back to their language. Arcand’s piece places the Cree language into the settler psyche in the way that English and French have become the dominant languages of communication in Canada.

For the work The Whale is Great, Mi’kmaq artist Michelle Sylliboy collaborated with her community on many levels: from rescuing the bones of a beached Pilot whale with her brother to incorporating the words and thoughts of community members. Those messages, carved delicately into the whale bones, integrate a glyph-based writing system nearly lost to the Mi’kmaq people. Sylliboy is one artist who is resurrecting the language through writing and sharing, bringing it back from the edge of extinction. Her newly released book Kiskajeyi – I AM READY is a reflection on the indelible spirit, knowledge, and cultural ways of the Mi’kmaq.

Language carries knowledge, culture, experience. It is how we express ourselves to the world, to each other personally and on a larger scale. With this impactful exhibition, viewers are asked to bear witness, to acknowledge this act, and, most of all, to give space to these languages.