Gesticulation is often done naturally, without much calculation, but when Steven Leyden Cochranedoes it, it feels intentional – as though he needs to motion or utter in order to know the physicality of something imperceptible suspended in the air. Putting feeling to words never satisfies what ends up being communicated, let alone interpreted. Cochrane knows this intimately and, as paralyzing that can be, he attempts it anyway. For Shining Tapestry, his recent exhibition at aceartinc., he presents a labyrinthine new body of work for which turning inward becomes the modus operandi. Mining the personal isn’t new in the Winnipeg artist and former Akimblog contributor’s work; however, instead of a buffet of images, forms, and disparate artifacts sprawled throughout the gallery, this exhibition eschews the busier eclecticism of past installations. At first scan, the assembled art is formally downcast and largely monochrome – something we aren’t used to seeing in a Cochrane install. Even the deep blue and orangey yellow light boxes that punctuate the show are rather melancholic. 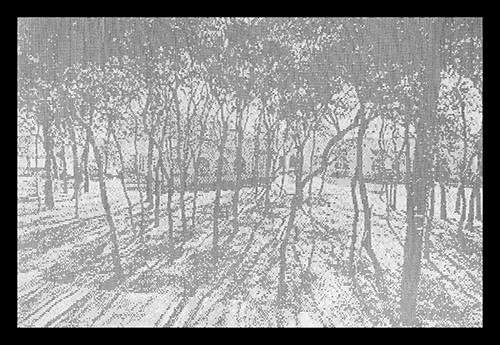 The works that line the walls come off as pensive and withheld. The images we see are barely perceptible. They are either broken up and pixelated to the point of being featureless, or made unidentifiable through the ornate crochet work the artist adopts throughout the exhibition. Crochet lacing is a form of rendering Cochrane has employed previously in making sculptural objects, but here they come in text reliefs on stretched fabric and drawings of found digital images that are then mutated through a streaming video, acrylic tablet, or as images for the light boxes to beam through.

Previously Cochrane presented scrapbook-like parsing through his foggy years growing up in Florida. If those installations were meandering, Shining Tapestry is not any more plainspoken, even in its minimalistic presence. It’s every bit as visceral, complex, and sensitive. Cochrane’s internal monologue here feels like scraps from a letter washed ashore. Fidelity is never crisp with whatever utterances he makes. He turns to language and it doesn’t help. What we get instead is a gushing waterfall of muddled words. In essence, he lip-synchs the words of other writers and artists for a kind of definition that never comes into any suitable focus. Language is never enough, so it is held suspect. Cochrane’s engagement with it says as much. He waxes and wanes with the declarative and sterile lettering you’d find at the principal’s office. His often unintelligible texting is signaled through lace patterns and corroded digital formations. Legibility is not easily summed up here. It stalks and contorts underneath, only intermittently making clarity possible.

Swerving legibility and embracing abstraction is a tactic countless artists have historically latched onto as a brace from the expected sensationalistic images audiences have in their heads. Artists, musicians, and writers like Chan Marshall – a singer Cochrane has previously referenced – whose work gets reductively accused of being confessional are often thought of as outputting a content concerned with catharsis or “the after.” The after is never nestled within any kind of cathartic release for Cochrane. In fact, the after never arrives. It is the beginning of what was before, only in a different tint. Perhaps more muted than before, perhaps just as strident as it first was. 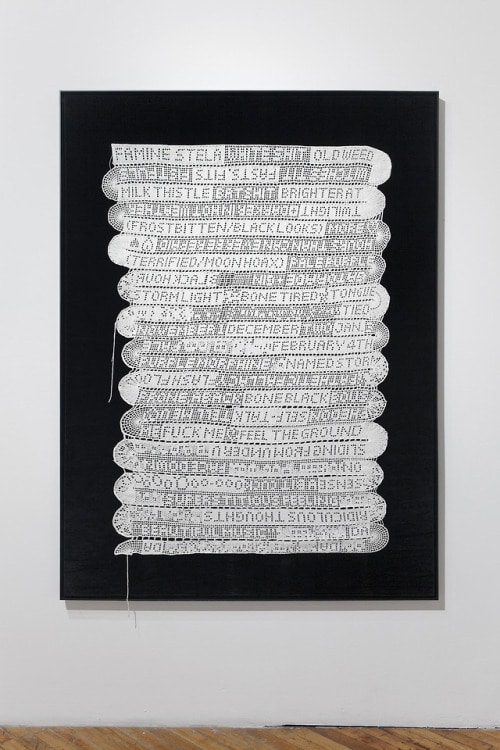 This reoccurrence is evident in the form Cochrane produces. This recursion is also an engaging complement to Cochran’s installations. His work thrills the mind to see where an image begins and where he takes it. In Wall Garden and Screen Wall, he has several objects that migrate in and out of different mediums and incarnations. Typical of this are his decorative concrete breeze blocks that recall architecture from his formative years in Florida. At this point these memory fragments have become monumental entities in their own right. They have seen innumerable permutations of their shapes and design. They’ve been presented as gelatin silver photograms, encaustic rubbings on paper, prints on fabric, colouring books, foam rubber – the list goes on. They have become the equivalent of repeating a word until the meaning bottoms out. Except, in Cochrane’s hands we still see the trace of its origins. In Shining Tapestry, it’s no different. An image of light piercing through rows of tree branches gets morphed and looped throughout the collection of work here. In some renditions, it becomes something else altogether. Something completely non-referential, only discernible through proximity to its origin. In these cycles, any descriptive language becomes unfeasible and, as such, Cochrane simply reproduces it through poetic means.

As much as personal narrative permeates the surfaces throughout the gallery, Cochrane is in tune with the larger realities and histories that bring the work into form. He makes references to the dire conditions in which the act of crocheting came to be invented, and also the deceptive qualities of making metaphors through surfaces. As much as formally subdued works like Cochrane’s can be mapped towards one logical representative end, they don’t wholly submit to clean associations. Not everything we see here can be deciphered with a one-to-one link. Cochrane is a gradual worker who frets on the details and produced this body of work over serval years. The toggling between meanings and referentiality saturates every interlocking loop of thread he applies.

Steven Leyden Cochrane: Shining Tapestry was on display from September 7 to October 14.
aceartinc.: https://www.aceart.org/
The gallery is not accessible.