At first glance, Rebecca Munce and Madeleine Mayo’s Star Rider looks like a neatly conceived exhibition of abstract and representational works. As I walk through Galerie Deux Poissons, a complementary relationship appears between drawings of medieval death-matches and sculptures that merge architectural and botanical forms. Mayo’s cyborg sculpture-garden provides a concrete setting for the floating soldiers, monsters, and royals in Munce’s drawings. Halfway through my walk I squeeze between Munce’s large drawing Swinging Rings on one side and the uncomfortably close tip of one of Mayo’s Nymphaea sculptures on the other. Suddenly, the battle scenes aren’t so safely contained – their threats are mirrored in the gallery’s gauntlet-like organization. This felt space for obdurate and vulnerable bodies seems closer to the philosophical point of curator Benjamin Klein’s pairing of these artists. 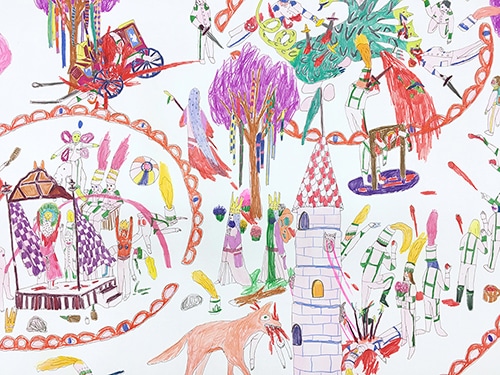 The world of Star Rider captures aspects of what art historian Erwin Panofsky called the “qualitative and aesthetic” space of antique and medieval art. For him, before the advent of single-point perspective, artists represented bodies in an “aggregated and tectonic” manner, clustered, hovering or overlapping, but always tangible. By contrast, the “quantitative and theoretical” space of the Renaissance canvas “emancipated bodies from their mass” to render them with mathematical precision as understood rather than encountered. In their works, Munce and Mayo explore the anxiety, thrill, and potential of encounters with bodies, whether looming and impersonal, or sensual, eviscerated, and flayed.

In Munce’s drawings the antique “feeling for space” is evoked in narratives of love and combat, and a playfully reinterpreted myth of futile labour. The action of Swinging Rings unfolds across seven feet of paper, spilling out of arenas marked by broken red barriers. Near the first ring an oversized horse rescues a soldier from a castle tower, leaving its rider behind in a bloody mess, squashed under a runaway carriage. Inside the ring, seated and slaughtered figures in uniform, and hieratic, contorted, or love-locked nudes are arranged around a stage amid puddles of blood, booze, and barf. In the second ring, dismembered or pouncing soldiers surround a hydra. With the monster missing one of its heads and a soldier dangling from a guillotine directly in the line of its B movie blood-spray, the fight is tough to call. The whole scene is witnessed by impassive sovereigns in the middle of the composition – “spectators” who are “more villainous than any of the combatants” for Munce. Smaller drawings present violent and amorous “risings and fallings” in a less frenzied but similarly ambivalent light. The most iconic of these comprise the suite of Expected Sisyphus Drawings, where the well-known myth is given in five coloured frames that read like a film loop or a comic strip. 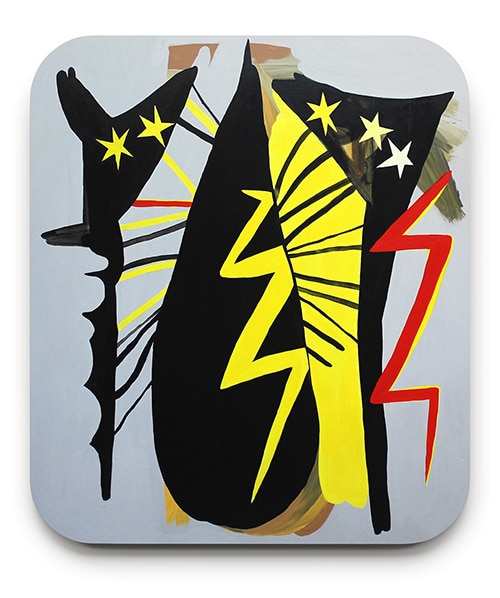 Madelaine Mayo, Both Uplifted and Downcast, Both at Once

Mayo’s biomorphic sculptures are spread out evenly, intervening in and dividing the gallery space. Court is held by the powder-green and yellow Nymphaea pieces. Modelled on water lilies but out-of-proportion, the sculptures each include a chrome plate and an array of webbed spikes that look like the dorsal fins of giant alien sea bass. Another monstrous plant appears in a painting titled In Fragaria’s Cleft. Here a spiked, star-tipped spine runs through a bisected strawberry evoking the anal fin of some other alien fish or a cat o’ nine-tails. Stellar and floral forms combine in paintings hung near the sculptures like “esoteric signs,” directing us with more sensed than understood commands. As unfamiliar as these works are, they convey attitudes, passions, and dispositions that are all-too-human. For Mayo, they are armour-like expressions of “assertiveness” and “defensiveness.” But they’re magnetic too, with bold colouring that encourages us to, in Mayo’s words, “feel it now” or engage viscerally with the work rather than intellectually.

Maybe relating all this to the space of antique and medieval art runs the risk of overthinking, but there seems to be some lesson, a hope, and a cautionary message in Star Rider along these lines. Munce describes her figures as “swimming in an endless space” and trapped in narratives that are “amplifications of our (equally violent and insatiable) times.” The space Mayo’s works conjure is similarly open and intuitive, and vibrating between threatening and seductive bodies, our own and those of her creation. She describes earlier works as giving voice to a “feminist utopic desire” for inter-corporeal relations between human and non-human creatures. Here as well, Mayo and Munce cautiously anticipate a world of embodied rather than measured and comprehended relations – for better or worse. Surely Panofsky never dreamed of divining a feminist utopia from the space of antiquity and the Middle Ages. In our own Dark Age, that task is best left to artists.