A narrative in blue emerges from the exhibition Refugio by Winnipeg-based artist Sarah Fuller at the University of Lethbridge Art Gallery. It maps a tale of both place and time, covering islands and mountains, and recounting the life of two insect species in different locales. The exhibition consists of a series of blue-tinted photographs set in Ball’s Pyramid, Australia and the Athabasca Glacier in Banff National Park; a series of sketches of spaces and research drawings; and a video exhibited within a small-scale theatre based on the Paris diorama invented by Louis Daguerre. Through her work, Refugio examines a nuanced vision of still and moving images drawn together through the story of two places. 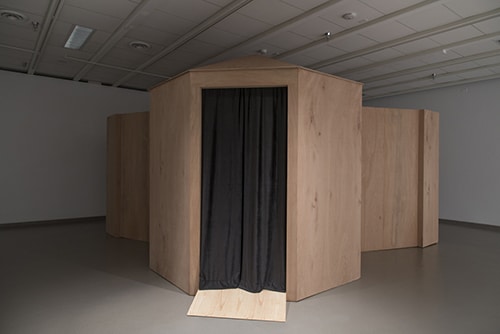 Visiting these remote locations, Fuller investigated the lives of two near extinct insects: the Lord Howe Stick Insect, thought to have been eradicated but found to be living on Ball’s Pyramid, a small outcropping of rock in the sea off the shore of Lord Howe Island in Australia; and Rock Crawlers, discovered in the Canadian Rockies, a species of insect that has adapted to extreme cold temperatures, so much so that the warmth of a human’s touch can kill them. Through weaving their stories into both the video and photographs, Fuller relates her work back to an overarching theme of climate change.

The photographs, awash in blue, open up to the viewer a vision of lands through a circular lens. Perhaps intended as an ocular effect, as if seen through a peephole, binoculars, or a periscope, the photographs are replicated in the video, but the image is seen to be moving slightly, making the hand of the artist visible and apparent. Aside from colour and texture (both intriguing elements), this aspect of performativity engages the eye and mind in a phenomenological sense, offering an alternative way of seeing.