First, I had to weigh my decision whether to attend the PuSh Festival at all. The festival has been marked by controversy since early last summer when they dismissed their associate artistic director Joyce Rosario and their audience service manager Janelle Wong-Moon. The reasons given rolled into the obvious budget constraints that so many in the arts are experiencing due to waves and waves of COVID-19 lockdowns, but the fact that these two women are of Asian descent stood out like a sore thumb in 2020, in the wake of race murders and unrest, in a year when most folks learned how to use the term “systemic racism” in a sentence.

Everyone in Vancouver associated the PuSh Festival with the hard work of these women, in particular, Rosario, who built the festival from the ground up and made it what it was. Joyce was the PuSh Festival. The news was shocking. There is almost no information to explain her and Wong-Moon’s departure. Any that exists is pretty inadequate. For reasons that I don’t know, Rosario isn’t able to speak about it, but artists like Hong Kong Exile and Tania El Khouri withdrew their works from the 2021 program in response to these events.

Adding to all of this, the interim programming curators Maiko Yamamoto, Marcus Yousef, and Dani Fecko, central figures in Vancouver theatre, resigned suddenly in the beginning of January, cancelling the upcoming PuSh Rally. The official explanation is COVID but it’s been said that artists were withdrawing because Yamamoto and Yousef were intending to hold a kind of public exploratory talk to examine what has happened, all while those directly involved have not been able to speak. Yamamoto, Yousef, and Fecko wrote in their statement: “We have also come to believe that the perspective we offered isn’t what’s needed right now. Because of this, we are stepping down from our contracts as Rally Curators and Producer, effective immediately.”

Rosario wrote in a Facebook post last month (that was echoed in the press): at a time of increasing precarity for the arts, there are still reasons to support the artists who remain in the PuSh program and the festival offers the rare opportunity for artists to perform in spite of the COVID desert. In this spirit, I booked tickets to two events in early January, before the resignation of the Rally curators: Violette, a VR experience developed by Joe Jack et John for Théâtre Sezième, which was cancelled; and Sanctuary: The Dakota Bear Ancient Forest Experience, a ten-minute, 365-degree immersive film experience by Damian Gillis, Cease Wyss, and Olivier Leroux, co-presented by the Push Festival and the Sunshine Coast Arts Council.

I was incredibly excited to attend Sanctuary, to see work about the natural and connected world, and to learn from Cease Wyss, a respected artist, educator, and activist of Skwxwú7mesh and Sto:lo descent. To follow public health guidelines, viewers enter the exhibit in pairs or alone, and are seated in the centre of a semi-vaulted, geodesic screen. Wyss’ voice performs as a narrator and tour guide in the dome, where viewers move through the Dakota Bear Ancient Forest, which has been in existence since at least the Ice Age. Music blends with natural sounds from the forest, as the film transfers from tree canopy to clear cut, juxtaposing the interiors of bear dens inside the hollows of ancient cedars with the violence of logging machinery. 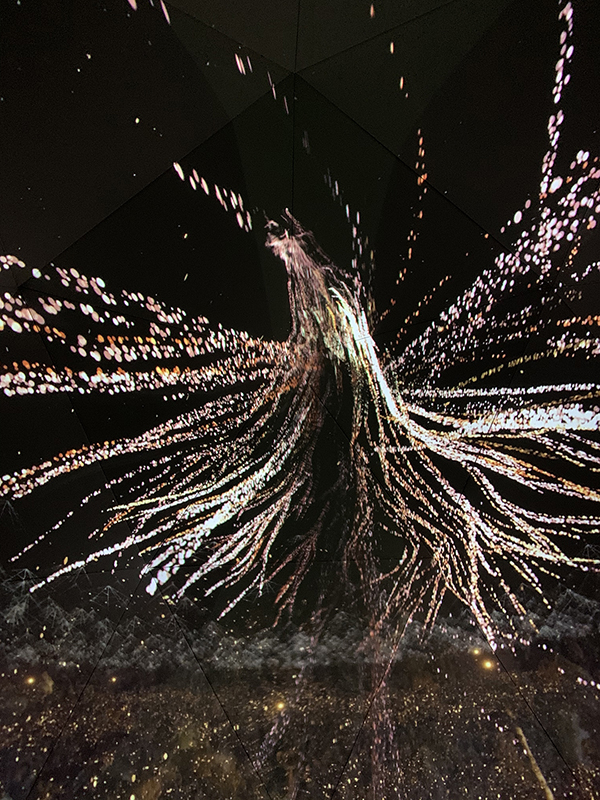 The statement on the festival site calls this a “transporting experience,” that “offers the thrill of immersion.” The experience of immersion is deftly constructed through the beautiful domed screen, which lent a kind of wrapping sensation. Entering the space alone, I felt I could be at the centre of the forest. Scenes from inside the bear habitats brought me especially close to a place I would otherwise never hope to see. Equally beautiful were the animations created by the media lab at Emily Carr University to show the rhizomatic activities of the forest floor. There are many belief systems that point to the long reaching root systems of ancient trees, suggesting that as living entities, their roots give them access to first knowledge of all that will happen in the world. These moving images show the extension of light into the forest floor, an energy that circulates and moves freely while it nourishes.

Despite my immersion, I felt a disconnect between the qualities of this film that call the viewer into the forest and the call to action that remains the purpose of this piece. The film takes a didactic tone, vacillating between the urgent need to demonstrate the threat the forest faces due to potential government auction and a desire to create a closeness between the viewer and the environment. Its educational message held the experience of total immersion at arms-length for me. 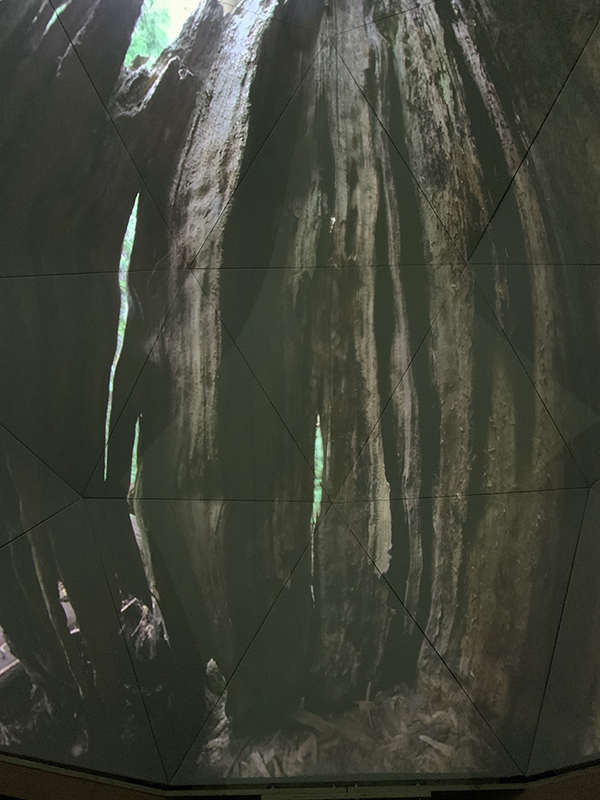 At the artist talk-back that I attended over Zoom, I asked Wyss and her interlocutor Anne Marie Rex, a young language keeper for the Skwxwú7mesh nation, about their particular choice for message delivery – what I called a more literal teaching method as opposed to something more abstracted. Rejecting this, Wyss said my question was redundant and that as a people their connection to the land is exactly literal. Rex added that the film strives to honour their peoples’ teaching style, which aims to show rather than speak. For me, I experienced both showing and speaking, where the speaking produced a disjointed effect that made me question the film’s effectiveness as an artwork. On the other hand, there is a distinct urgency to its message and we know we are running out of time. While I lean into the ways that art can make us think without telling us how, I recognize that the intellectual tradition that I and many others have come up in centres whiteness and may value a certain form of silence. But, I wonder why shouldn’t we speak of this? If not now, then when?

The PuSh Festival has reduced programming, streaming predominantly online through various platforms, from January 28 to March 11.
Sanctuary: The Dakota Bear Ancient Forest Experience ran from February 3 to 7 at Performance Works to a sold out audience.
The venue is accessible.

Yani Kong is a SSHRC Doctoral Fellow of Contemporary Art at The School for the Contemporary Arts at SFU. She is the managing editor of the Comparative Media Arts Journal and a freelance writer, editor, and critic.