A couple weeks ago many of us bundled up, grabbed a hot chocolate, and made our way east for Nuit Blanche’s Scarborough debut. One of my favourite parts of the night, and certainly the most memorable, was a panel discussion between Scarborough-born artists Anique Jordan, Erika DeFreitas, and Rajni Perera at the Civic Centre’s public library. Each spoke candidly about the city’s influence on their work, its future in art, and the culture-producing qualities of Toronto’s suburbs. Perera, in particular, flagged what she called the Scarborough aesthetic, and its increased visibility in galleries downtown and throughout the GTA. I immediately knew what she meant as I considered the work of the other women on stage and as a list of Scarborough artists began running through my mind. They are not linked by style, palette, medium, or even ideology but, I believe, by their ability to create mythologies, wield spirituality, and materialize imagination. This is especially evident in Perera’s new solo exhibition (m)Otherworld Creates and Destroys Itself currently on view at Project Gallery. 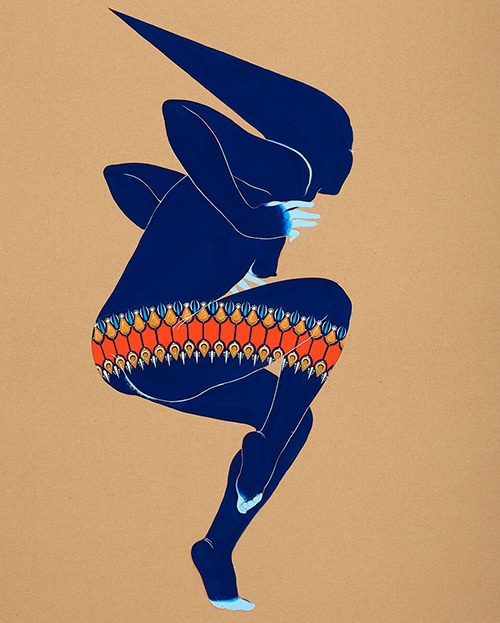 I arrived at the gallery early enough to be the only one there and was surprised to find the room peppered with palm-sized sculptures, some shaped like little spaceships, others like horns, one decorated with a gold appendix, another lightly painted, all of them sitting atop plinths. I followed them around the room, crouching to read their names and noticing the red dots beside their prices before I straightened back up to view the drawings and paintings on the walls. On unassuming brown board, four figures dance along the east wall, each sporting Perera’s signature angular heads, and nude except for a minimal or maximal midriff adornment (Dancer 1, 2, 3, 4). If you get close, little galaxies appear in the dark corners of a crown, and the girdle of one of the dancers gleams as though it were Aphrodite’s, “into which all of her charms were wrought: love, desire, and sweet flattery” (to paraphrase the Illiad). But these goddesses do not belong to Homer, nor do they belong to the past. These dancers are creating a world that must be adjacent to this one, coexisting and contemporary.

In the furthest room, there are two extraordinary paintings with detail unimaginable. One (Neighbourhood Watch) depicts a fuzzy creature (whose fur seems to bat like eyelashes if you stare long enough) sitting atop an apricot planet with a reddish-orange ring. The other is another woman (yes, this is definitely a motherworld) with a motorcycle tire for a butt, holding modified NASCAR flags in three of her four hands, each with pink and purple lacquered nails (MOTO). More paintings continue along the walls, culminating with Traveller, which had the most impossible shade of teal and a texture that was begging me to touch it (I didn’t). 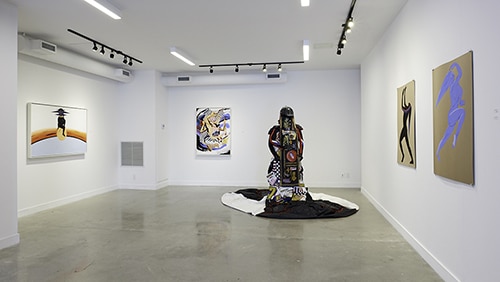 (m)Otherworld Creates and Destroys Itself not only reasserts Perera’s superlative painting ability, but also the true power of mythology. As I left the gallery I thought of what it had meant for nineteen year old me to read Ovid or Homer for the first time, to be transported to another world of possibility and beauty. And now I wonder what it would have meant to have Perera’s mythologies as well, to witness something so improbable as a woman with a pocket in her stomach (Pocket), only to find comfort in her familiar features: a wide nose, full lips, a crown that looks almost like a du-rag. To know that I could be a part of an imagined world, that someone had me in mind as they considered the impossible could have been life altering. During the Nuit Blanche panel, Perera laughed before admitting the landmark that influenced her practice was Pacific Mall. But, as she says, for a brown girl from Scarborough interested in manga, discovering P Mall changed her life. Here’s to (m)Otherworld being somebody’s P Mall.