Never have so many shared so much and done everything they could do stop it from happening. The contradiction that emerges in times of pandemic is that the thing that brings us together necessitates that we stay apart. Add to that the distanced connectivity of the internet and this whole quarantine situation has made a mess of what it means to isolate. One unexpected outcome of our universal condition is that (as the signs say) we’re all in this together. Which means not just neighbouring countries and cosmopolitan epicentres, but small towns that would otherwise feel removed from the hustle and bustle of global affairs. The threat of infection is everywhere, its impact extends far and wide, and the responses of small regional art centres are just as germane as any from anywhere else in the world.

In the strange way that art can often predict the future, some responses were made before the pandemic even hit these shores. The video installation locked in a way by Matthew Hayes and dance artist Victoria Mohr-Blakeney opened at the Art Gallery of Peterborough way back in January, but remains accessible through the gallery’s website. The work combines Mohr-Blakeney’s choreographed exploration of a small bathroom with a recording of her making plans with her late mother Renate Mohr. Before mid-March, it would have been a meditation on mortality and loss. Since then, it can’t help but lead one to think of the deaths among elderly people – particularly those in nursing homes – due to COVID-19. Perhaps the most tragic revelation of this terrible time is how awful the sequestering and neglect of our aging population has become. 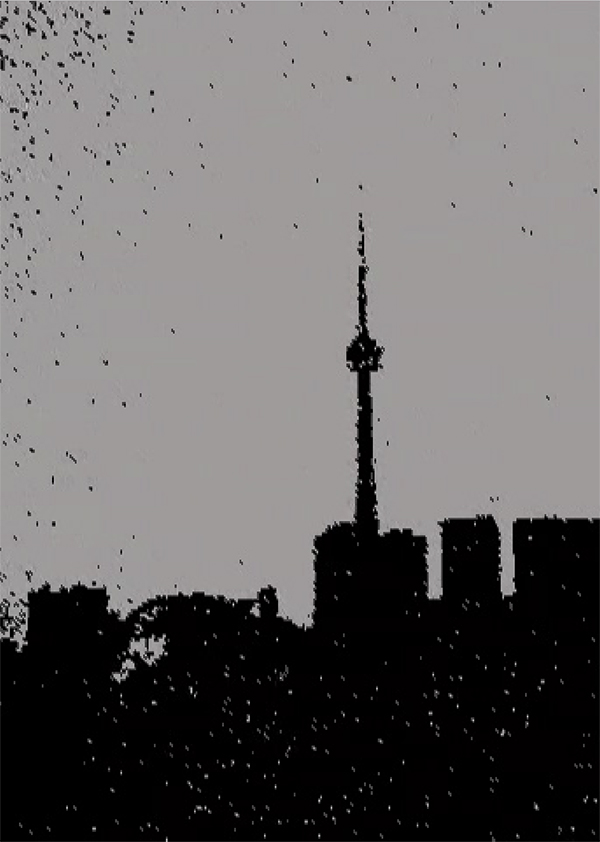 Ho Tam, In the Dark

Another instance of the future being foretold can be found in Ho Tam’s video from 2003, In the Dark, which is now online through the White Water Gallery in North Bay. The connection to our present is not surprising as it was made in the aftermath of our last pandemic when SARS hit Toronto and made the city a fixture of international dread. By rephotographing images from the media at the time in degraded black and white, Tam elicits the fear, uncertainty, and frenzy of disease. Urban life is reduced to predictable conflicts (culture clashes, xenophobia, economic distress) and familiar solutions (political maneuvering, collective action, and masks, masks, masks). Even though I lived through this period, I barely remember any of it impacting me. Will the same amnesia apply to this spring? Maybe it’s because I was almost twenty years younger and wrapped up in a cavalier attitude like so many of the oblivious millennials hanging out en mass in my local park. Tam’s history lesson is that we forget the past, and it’s happening faster and faster. I see it even now as a crack in the quarantine releases and relieves thousands from anxiety. Things are suddenly back to normal – except for those of us still sheltering, isolating, and distancing.

An Unexpected Visit, a 26-second animation by Lisa Duhaim-Gibson, is paired with In the Dark and it shifts attention to the youngsters who might not be affected by the virus, but have had their lives changed by the quarantine. With the song that has taught generations of children about plagues as a soundtrack (Ring Around the Rosie), the video shows a child’s balloon being popped by a shadowy figure, which then releases a swarm of locusts. This compact lesson in the loss of innocence and, perhaps, the acquisition of experience is tailor-made for repeated viewing.

Not explicitly about the pandemic, but impacted by it nonetheless and tinged with the theme of isolation, For This Land: Inside Elemental is a two-channel video presented online by the Durham Art Gallery and originally intended to be an installation and performance as part of the nearby Fabulous Festival of Fringe Film. Created by 2Ro Media, the team of Janet Rogers and Jackson 2Bears, this meditative immersion into the geography of the Six Nations of the Grand River shifts between nature and built environments, playing off the visual and sonic rhythms of each to slow time and heighten the perception of space and place. There are hints of ghost stories, Indigenous futurism, and decolonized narratives in the doubled images, the onscreen illustrations, and the sound design. For the many of us who would not have had a chance to witness it in person, this emergency online variation is a blessing in disguise. If anything, through an investigation into a particular landscape, it leads us outside of ourselves. Getting into the trap of self-obsession has been the easiest part of isolation. Getting out of it will be – as it’s always been – our biggest moral challenge.

Matthew Hayes & Victoria Mohr-Blakeney: locked in a way continues for the time being.
Art Gallery of Peterborough: https://agp.on.ca/exhibitions/locked-in-a-way/

For This Land: Inside Elemental continues until August 20.
Durham Art Gallery: https://www.durhamartgallery.com/