Nora Hutchinson at the Art Gallery of Hamilton, online

I’ll confess. As profoundly as I miss being inside art galleries, there are advantages to viewing the Art Gallery of Hamilton’s Nora Hutchinson retrospective from home. The loss of large-scale projections and slick video monitors is compensated by the intimacy and comfort of sinking into an autoplay of Rebel Opera on my living room couch, even while my cat bunts his cheek against the edge of the MacBook’s screen as though to prove this a bad idea. Other distractions seem more productive: a voiceover describing a view out the window prompts me to glance outside and see that now-overfamiliar view with different eyes. Later, that same distracted gaze bounces between the blue-green shirts worn by the actors in Dick and Jane and the identical blue of the cocktail napkins on my coffee table. Hutchinson’s world feels at home in my home, and lingers with me long afterward despite the digital divide. 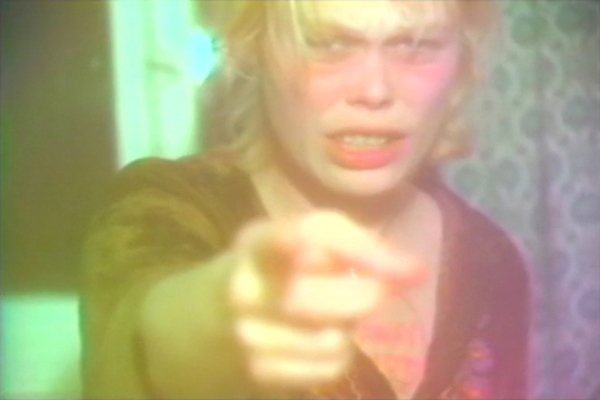 As a virtual adaptation of its gallery presentation after the AGH was required to close its doors due to our provincial lockdown, Rebel Opera is a Vimeo playlist that unfolds chronologically from Hutchinson’s early works of the late 1970s to If You Hate This Planet, created twenty years later in 1997. These selections provide a roadmap to the lived experiences informing Hutchinson’s work, from the grandmother and opera singer who influenced Hutchinson’s musical training in Granny and Me (1982) to the biological and chosen family who crystallize around her life and work.

The early videos have the tactile quality of an artist discovering video’s raw potential in its infancy, fascinated by the luminous ways an excess of light can teasingly resist sight. In the glimpses permitted by her lens and sharp editing, we meet the young artist as a magnetic performer who tests the boundaries of her world – passing through doors and mirrors alike, stretching arms through window frames, braving a fire escape in heels. These visuals are propelled by the rhythms established through Hutchinson’s compelling command of sound: her trained voice with its remarkable range as well as delirious musical compositions that pound and weave with a timeless percussive power. By turns ethereal and downright earthy, Hutchinson’s use of spoken word and sung lyrics flows from a powerful musical sensibility, layering even her most coy rhymes with a ritual quality that is undeniably catchy. 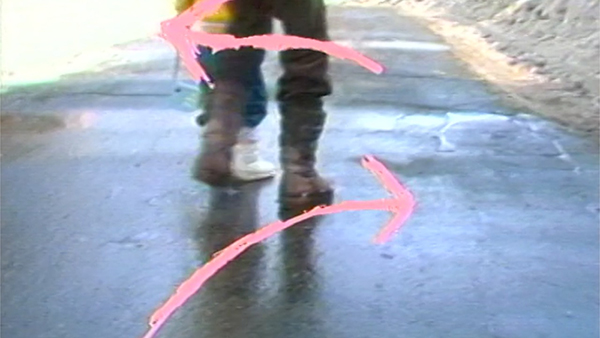 Arrow Walk (1985) relaxes the eye with wires passing over blue sky before following a toddler’s white boots navigating a slushy path, en route to the store based on the list of items that cycle on the screen. The responsibilities attendant on that child’s relentless footsteps mark a pivot point in Hutchinson’s practice that is realized in Opera Around the House (1987). This production of locations and collaborators drawn from Hamilton’s arts community of the 1980s reconciles a frenetic sitcom energy of husbands and neighbours with introspective passages that peel back the layers on these relationships and their attendant expectations. Even as she names the domesticities that can distract from creative work, Hutchinson valourizes these as the very stuff of life. The labour of family, the underacknowledged acts of care performed by women everywhere, are worthy of opera, even if that opera is improvised out of acetate wings and backyard rehearsals around a swing set, their collective song shushed by wind in the trees. 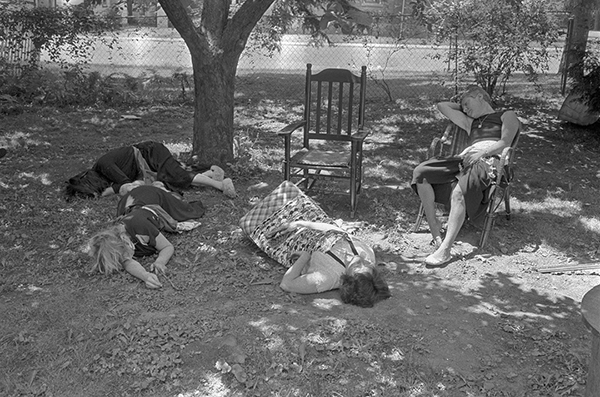 Nora Hutchinson, Opera Around the House, 1987, video (courtesy: the artist and Vtape)

Opera Around the House is Hutchinson’s last appearance as a performer in the program of Rebel Opera. Her music and her ideas endure in the trusted hands of collaborators who become familiar in turn, though I find myself missing the precise confidence of her gestures and glances, the metamorphic capacity of her full mouth to swing from delight to contempt in a heartbeat. The determined young artist of the first videos resonates across decades with each defiant push against her surroundings, but her concerns for the environment and mental health are given a more accessible articulation through a shared language that is visibly brought forth in collaboration with friends and peers, both on-screen and behind the camera.

A motif that recurs through Rebel Opera is communication across distances, from hand-written letters to games of tin-can telephone. In these last videos, we witness Hutchinson as a skillful conductor of the communal energies that surround her – an introspective, fearless being transformed through collision with the wider world into a greater public force for good.

Nora Hutchinson: Rebel Opera continues until February 3.
Art Gallery of Hamilton: https://www.artgalleryofhamilton.com/
The gallery is currently closed, but the exhibition is accessible online.