I spent much of the week following the opening of Nep Sidhu’s solo exhibition Medicine for a Nightmare (they called, we responded) suffering from FOMO. As I scrolled past dozens of selfies, blurry details of tapestry, and what seemed to be the most fashionably dressed crowd on Instagram, I couldn’t believe that this was the night – of all nights – I decided to stay in. One week later, when I finally arrived at Mercer Union, I was glad to be greeted by a small crowd of ten or twelve, an unmistakable wave of quiet (which is not the same as silence), and a feeling that even Instagram spoilers could not have reproduced. 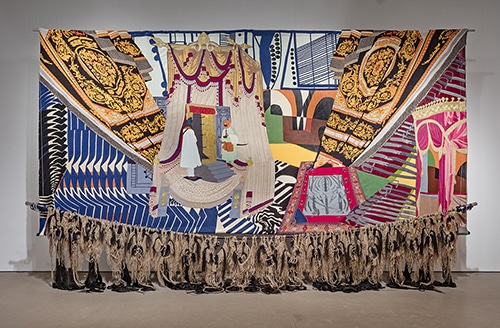 As I made my way down the hall, only briefly did a pair of framed photographs catch my eye, and though they are mysteriously missing from all exhibition documents, they seemed to indicate that I was entering a sacred space. In the front gallery, two large tapestries spanned the walls and I was flanked by two vinyl-black busts with lips painted red. I decided to save the tapestries for later and ambled my way around the busts. Made in collaboration with Maikoiyo Alley-Barnes, they consist of peculiar materials like incantation, DNA, and coral (the red lips?), as well as more familiar ones like stainless steel, brass, and aluminum. Engraved on each are excerpts of Sikh scriptures, many of which were destroyed in Operation Blue Star, a massacre orchestrated by the Indian government against Sikh resistance fighters at the Golden Temple Gurdwara from June 1 to 8, 1984. It is precisely the memory and loss suffered during this attack that Sidhu commemorates, recuperates, and tends to throughout this exhibition.

Next I turned to the tapestries, specifically one which borrows its name from the exhibition title (or, the other way around) and is part of a series called When My Drums Come Knocking, They Watch. Golds, reds, blues, and flesh tones form a skene around two men, one dressed in white, the other in seafoam green, as they stand before the Hazūr Sāhib, one of the five holiest Sikh sites. This is only one element of the storytelling and memory found within this tapestry (and the other), and you ought to read the accompanying essay, written by the exhibition’s curator cheyanne turions, to fill in the sonic, material, and iconographic gaps I am unequipped to convey in this review.

Medicine for a Nightmare culminates in the rear gallery with a tripartite installation comprised of a three thousand pound sculpture titled Formed in the Divine, Divine Form fenced with soil from the Golden Temple (to honour and invite Sikh people who were lost during and beyond Operation Blue Star to witness the work) and placed above a shallow pool of water flecked with delicate white flowers. A vinyl photograph of plates from Hazūr Sāhib is affixed to the adjacent wall and a gong is struck over a seemingly endless ambient drone, reasserting the tranquility, or quiet, with which the exhibition began.

The sheer grandeur of Nep Sidhu’s undertaking speaks to the gravity of the massacre, the many ways in it has affected Sikh people’s lives, and the ways in which community and acts of care persisted. Yes, there is trauma and grief embedded within this work, but even more than that is Sidhu’s deep affection for Sikh communities.

Nep Sidhu: Medicine for a Nightmare (they called, we responded) continues until March 23.
Mercer Union: http://www.mercerunion.org/
The gallery is accessible.