Morehshin Allahyari at the MacKenzie Art Gallery & Off-Centre: Queer Contemporary Art in the Prairies at the Dunlop Art Gallery

A commanding, mechanical voice resounds through the darkened gallery. It is the voice of Iranian-born artist Morehshin Allahyari speaking as a powerful being – neither human, nor angel, nor devil. Unearthing forgotten and suppressed figures of female or non-binary power from art history and folklore, her solo exhibition She Who Sees the Unknown at the MacKenzie Art Gallery conjures three jinns (genies) in computer animated videos, 3-D printed objects, and interactive text. The most chilling installation, The Laughing Snake, is silent and to be experienced singly. A shimmering double coil supports the head of a woman, her mouth bristling with fangs. The sculpture floats on fishing line, enclosed in a mirrored cavern along with a hypertext interface that tells how this invincible killer laughed herself to death on encountering her image reflected in a mirror. Successive clicks bring up stories of sexual harassment as endless and destructive as the snake’s laughter. 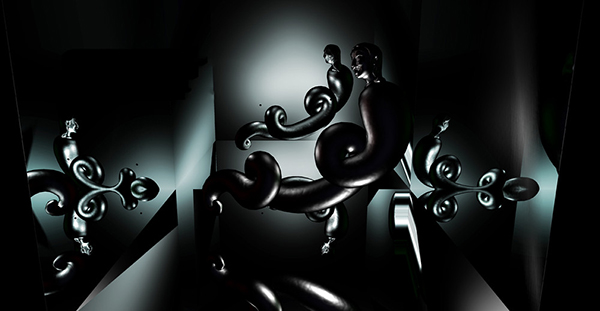 Jinns resemble humans with bodies of smokeless fire. It’s an enticing vision of agency – to be relieved of the burden of vulnerable flesh. The disembodied self, forged in the smokeless fire of computer monitors and smartphones, is a kind of Cartesian nightmare. A nightmare that reached out from digital screens to haunt the dreams of transgender artist Vivek Shraya. As her email inbox filled with Sanskrit-peppered death threats from a stranger named Nain Yoyokama, she collaborated with Ness Lee to document the dreadful visions and sentiments provoked by the hate-filled missives in a graphic novel; panels of which have been reproduced on the glass atrium of the Regina Public Library. An email composition window ringed with flames hovers above Shraya’s blaze of blond locks. A second panel depicts her harasser as a menacing black scribble as distasteful as a swarm of flies or an oil slick. The centre panel shows a face like a setting sun, reddening and plunging into a lip-like pillow – a lurid image of suffocating grief.

The wish to slip through the stranglehold of control and harm prompted me to remark to John Hampton, curator of She Who Sees the Unknown, that I wished to be non-corporeal. He responded, “Do you mean a ghost?” Perhaps I already am a ghost – the sort of ghost posited by Maura Roberts in Making Friends for the End of the World, co-written with Billy-Rae Belcourt and published in Guts magazine. My whiteness allows me to float effortlessly through this Colonial world – passing through barriers that exclude others.

Daniel Cardinal McCartney’s large mixed-media work wâsakâm-iskôtêwan (Ring of Fire) brought me down to earth and made me suddenly aware of my body and that of the artist. A thick white line traces the outline of McCartney’s body on a substrate of cardboard beer cases that evoke the aggressively normative ritual of bush parties. The frail line contains the slight mass of this transmasculine person, a likely target for violence, vulnerable within this expanse of dull brown paper pulp.

McCartney is one of thirteen Prairie artists included in Off-Centre: Queer Contemporary Art in the Prairies, curated by Garry Varro and Blair Fornwald. Spanning a range of genders and sexual identities as well as both of the Dunlop Art Gallery’s spaces, the exhibition is often frankly corporeal, carnal, and fleshy. Fifteen works are already on view in the Dunlop’s satellite gallery, while the second half of Off-Centre opens in the central library this Friday.

Despite the suburban setting, the Sherwood Village Branch component of the exhibition isn’t bland. Winnipeg filmmaker Lasha Mowchun presents an orgy of writhing fabric and stroking hands in a perverse substitution of flesh for textile in her video Second Skin. Five delightfully camp digital prints by Rosalie Favell probe emulsions of old family photographs for secrets and propose kinships among pop culture icons. Megan Morman’s cheerful plastic beaded replicas of bandana squares are a crafty reinterpretation of the secret language of gay cruising which in-turn appropriated iconic cowboy kitsch. The once transgressive hanky code has been rendered merely ornamental, supplanted by online forums and hook up apps; it is no longer necessary to advertise sexual preferences on one’s body.

My encounters with art this month have reminded me that to shirk the body is to deny the self, the self that this forged in the fire of everyday life, shaped by the reception and treatment of that body by others.

Morehshin Allahyari: She Who Sees the Unknown continues until August 25.
MacKenzie Art Gallery: http://www.mackenzieartgallery.ca/
The gallery is accessible.

Sandee Moore is an artist whose art criticism and scholarly texts have been published in various books and periodicals. She is a sessional lecturer at the University of Regina and produces a bi-weekly visual arts program for CJTR 91.3 FM Regina Community Radio, which is also available as a podcast at soundcloud.com/realpieceofart.