As governments started announcing the first measures to tackle COVID-19 and public gatherings — now almost seeming to pertain to ancient times — were banned, Montreal’s International Festival of Films on Art was swift to offer its programming online. In a smart bid to insure both visibility and avoid total loss, as well as suggest a new viable model for film festivals, 165 films from their 38th edition are now accessible until March 29th for $30.

Closures and cancellations have weakened already often precarious local artistic and cultural communities, raising many doubts regarding the relevance and feasibility of art during times of upheaval. For those fortunate enough to have shelter and access to a connection, FiFA provides a great opportunity to delve into those questions and maybe answer some of them. The many stories of artistic prowess, innovation, and acts of resistance instill a sense of faith and guidance in times clouded by uncertainty.

Speaking of faith, the aesthetically seductive short video Flower Punk attempts to restore ours in the powerful resilience of the natural world. It presents the work of acclaimed Japanese floral artist Azuma Makoto and botanical photographer Shiinoki Shunsuke, two friends who left the countryside to make it in the big city with their punk band, only to become arguably the most famous and innovative floral sculpture duo living today.

In the video’s first sequence, watching the floral master dip, burn, cut, and coerce flowers into stunning yet ephemeral arrangements makes one think about our desire to control the impermanent beauty of flowers, while scenes at the gigantic OTA flower market showing the scale of the commercialization of nature are almost dizzying. But as Makoto reflects on past projects, we realize that he conceptualizes installations that encompass the lifespan of flowers, from vigorous youth to decaying beauty. Flowers thus act as a metaphor for our strong yet vulnerable human bodies that, no matter how detached from nature we may live, unavoidably return to it after our death.

The movie follows the duo from the studio, where all their experiments originate, to their wildest projects: shooting flowers into space or plunging them into the depths of the ocean. It softly transitions into more intimate settings as the artists return to their rural home town and contemplate the influence that the surrounding landscape had on them. But it’s in the face of devastation, after the tsunami that hit Japan in 2011 and ensuing nuclear explosion in Fukushima, that Makoto truly grounded his practice in the imperative of respecting the fabric of natural environments, of striking a delicate balance between its parts – such as flowers – and our actions. Witnessing the scale of this man-made catastrophe, he apologetically bows down in grief and humility. His art is a prayer, he says, between the recognition of nature’s generosity and the wish to make it justice.

Also working within the legacy of the traditional floral art of ikebana is Montreal-based artist Michelle Bui as seen in an artist portrait directed by fashion designer Rad Hourani. Bui creates seductive compositions out of cut flowers grown in carefully controlled environments, giblets, and various mass-produced objects, often made of plastic. This juxtaposition of “infinite objects to finite ones in the same time frame reinforces the idea of precarity,” she says. 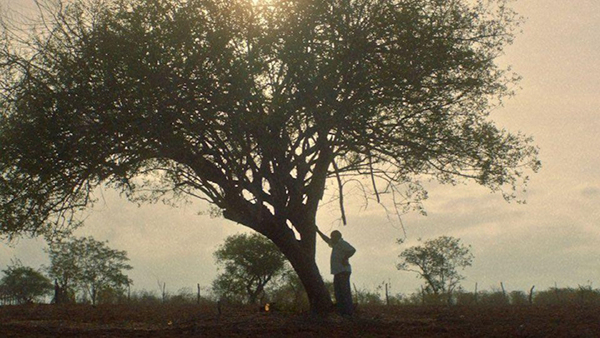 In a much different environment, in rural Brazil, the sculptor Veio, as shown in a short video of the same name, works from the land – not from its flowers, but rather its trees. Scouring deforested farms, he extracts roots from the ground, which he then sculpts into imaginary creatures that seem to belong to the animal, human, and natural world all at once. Looking at branches of twisted trees, he explains that his aim is to complement his findings rather than destroy them. Uninterested in the commercialization of art, he makes a distinction between those that live off art and those that live for it. He is of the latter category, as revealed through a large shot of the artist, firmly grounded on the dry soil, standing in the middle of hundreds of his sculptures. It is a testimony of a creative relationship with the land’s offerings that is anything but barren.

As the current health crisis creates an unprecedented suspension of the valuation of our selves and our time in terms of productivity, there is a purity to Veio’s integrity that should not be mistake for naivety. His story is just one of many to be found to provide inspiration and solace if one takes the time to dig deeper into FiFA’s generous offering.

The International Festival of Films on Art continues until March 29.
The online program is available here: https://www.artfifa.com/en/news/unveiling-of-the-online-program

Eve Tagny is a Montreal-based artist. Navigating between writing, photography, video, and plant-based installation, she explores themes pertaining to the ever-evolving expressions of hybrid identities.