I was introduced to Margaux Williamson’s paintings at an artist talk hosted by the University of Guelph in 2012. She had recently moved back to Toronto from New York, and returned to painting after completing the final version of her film Teenager Hamlet. I was drawn to her preoccupation with place, but having now seen her career-spanning survey a decade later, I understand it better as a preoccupation with time. Interiors, curated by Jessica Bradley and organized by Sarah Milroy, chief curator at the McMichael Canadian Art Collection, is the artist’s first solo museum exhibition. It began its tour at Museum London in June and is now at the Thunder Bay Art Gallery until December 31. 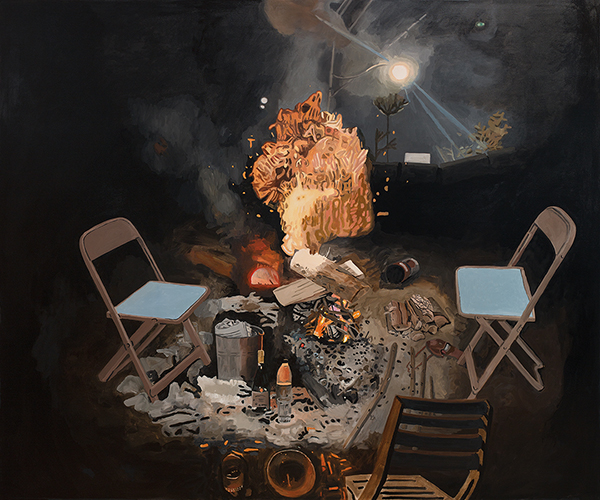 Writing about painting through the lens of time seems like a readymade critical methodology that could be applied to almost anything. What’s worth addressing, though, is why an artist with an adept facility for filmmaking, performance, and ephemera would use static media to tackle the most quotidian, yet most elusive subject of all. In the centre of both gallery spaces are long tables filled with notes, photos, scribbles, clippings from art books, postcards, lists, addresses – the mnemonic prosthetics used to stitch the past together, as imperfectly as a painting. It’s hard to tell if these artifacts inform us of Williamson’s approach to recruiting subject matter, or if they’ve been separated and kept under glass for other reasons. 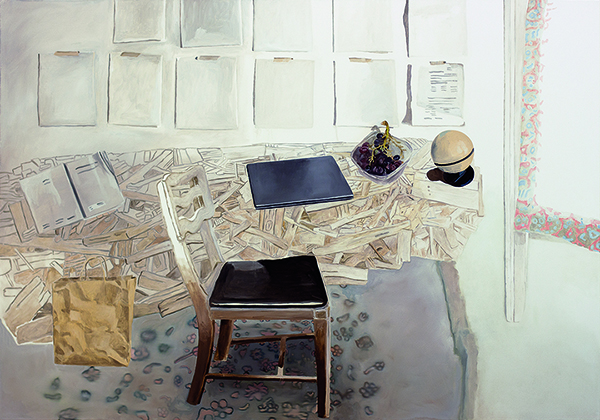 In the paintings Table and Chair (2016), Desk (2020), and Kitchen (2021), interiority immediately takes on psychic qualities, cobbled together like familiar memories – indexical snippets of time collected by the artist and reconstituted in two dimensions. As with the reassembly of memories, some elements are given greater significance than others. Drinking vessels are carefully rendered while the edges of tables often fade into provisional obscurity merging with the textures of floors and walls. In many of the compositions I find myself floating somewhere near the ceiling like I’m having an out-of-body experience, confronting the strangeness of vertical Daniel Spoerri-esque tables as if Williamson is asking me to read them like pages in a book. Yet things I should be able to read – labels, laptops, papers posted to the fridge – are obscured and reduced to blacked out text, reminding me of an oneiric phenomenon many of us have experienced: the absence of electronic devices in our dreams. Perhaps it’s an unconscious revolt against the typed word.

In conversation with her friend, the author Sheila Heti, Williamson talks about the oppression of words, that while she needs words, they can seem “overused and overvalued.” Interiors shifts away from the logocentrism of our times, when it often feels like entire bureaucratic sectors of society are designed with the sole purpose of reiterating life’s “Terms & Conditions” ad nauseam. Maybe this is why some have described Williamson’s spaces as anarchic. But as time flattens out, so does language. Memories of entire rooms get cooked down to their basic shapes and colours. Long conversations get reduced to general tones and sound bites. In We climbed into a hole in the wall (2014), you can almost hum along to tavern songs whose lyrics have long been forgotten. In Table and Chair, the central tumbler appears to thrust itself out of the painting’s two-dimensionality. But when seen up close, the economy of brushstrokes flattens it right back down again – the painter’s teasing, telepathic gift. 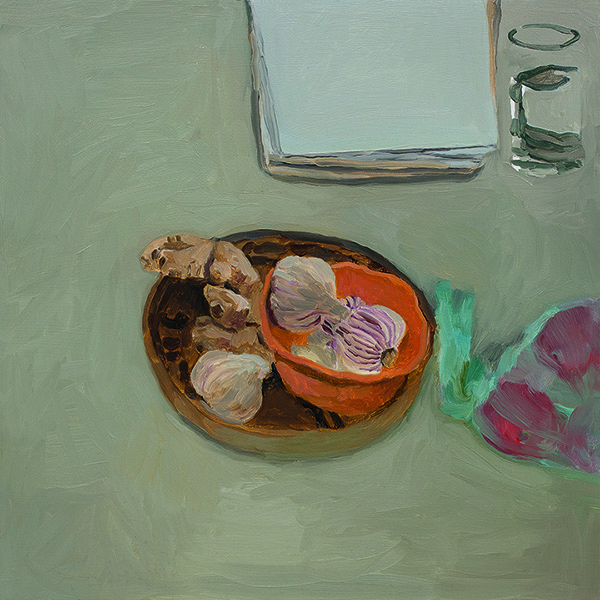 Interiors offers shelter from both the oppression of words and the oppression of environmental forces. All the windows are shuttered and blinded. The few exteriors – The Meeting Place (2021) and Fire (2021) – feel more claustrophobic and unnatural than the interiors. There’s an ambiguous relationship with the passing of time that, as an Ontarian, I relate to as a kind of lake effect gothic: intermittent chunks of time spent with cheap comforts and isolation; waiting for the fog to break; waiting for the humidity to lift; waiting for the sun to rise, and the effect it has on our minds – snow days, power outages, dead car batteries, seasonal affective disorder. Up here in Thunder Bay, Interiors has a special relevance this season as the days in the north get shorter and the winds over Lake Superior get colder.

Tyler Muzzin is an artist, writer, and educator currently based in Thunder Bay.