Making Music Together: An Interview with ASD Band 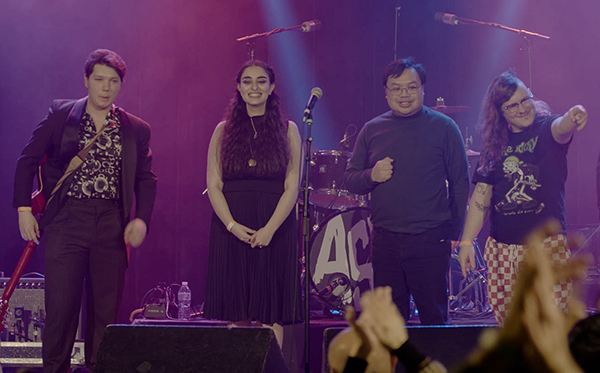 Each of the four members of ASD Band has a distinct musical taste – from pop to classical to punk to Elvis – and their own unique experiences from living with autism. Through music, they have found a way to overcome the challenges they face with communication and work together as collaborators as well as share their stories through song to a wider audience. They are featured in the documentary Okay! (The ASD Band Film), which screens tonight (April 29) and on May 3 in Toronto as part of the Hot Docs Festival 2022. It’s also available online for a limited time.

Akimbo interviewed the band members and asked them about their music, being in a documentary, and working as artists with a disability.

I’m Ron Adea. I’m twenty-nine and the keyboardist in the ASD Band. I started to play the piano when I was seven years old and studied under a private tutor. I later went to the Merriam School of Music in Oakville. There I met my piano teacher who taught me how to read notes and learn more classical pieces. Aside from piano playing, I like bowling, swimming, going for walks, cooking, baking, dancing, and hangouts.

I am Rawan Tuffaha. I am the lead singer of the ASD Band. I started humming music before talking. Because of my behavior, I was introduced to music therapy and I loved it. My music therapist found that I had a talent for music. I was able to play piano by ear without professional training. I pursued my music by learning alongside teachers such as my vocal coach.

My name is Jackson D. Begley. I’m the lead guitarist and vocalist in the ASD Band. I have a background in the early rock ‘n’ roll tribute scene, and have always had an interest in fifties and sixties music. As a songwriter who self produces, I greatly admire Brian Wilson. Even prior to Pet Sounds, the early Beach Boys recordings have a depth of melody and harmony that wasn’t common in other pop recordings from the same period. Surfer Girl may have cheesy lyrics, but those harmonies are expertly voiced. Also, In My Room has no business being as good as it is. In my opinion, Wilson’s work is proof that popular music can be something greater than shallow bubblegum pop. He’s a brilliant example for young songwriters and producers to follow.

How would you describe the band’s music?

Ron: Our music is mostly about our experiences as individuals in the spectrum. For example, I wrote Serenity and it’s all about calmness and feeling the coolness of going to the lake. It makes me feel relaxed when I hear the water tapping on the sandy shore.

Rawan: Our music is rather unique because we write our own songs that resemble our own personal styles. All of our music comes from the heart and our creative minds. I consider our style to be bohemian because everyone brings a piece of themselves. That being said, we always sit together and brainstorm our arrangements.

Spenser: It’s eclectic and represents everyone in the band really well.

Jackson: The ASD Band’s music is sonically pop rock with an alternative edge. The songs in our first EP are thematically centered around our experiences as autistic people in a neurotypical world.

What was the best part about being the subject of a documentary? What was the hardest part?

Ron: The best part for me when playing the piano and performing live at the Opera House Theatre in Toronto. The hardest part was trying to understand what people around me were talking about, because I had a hard time of understanding when they talk too fast.

Rawan: The best part of being in the documentary was that it showcased my various hobbies outside of music, along with how the band came together through thick and thin. The hardest part was being vulnerable and discussing my personal matters in front of everyone. Also, I wish we could do a sequel to the documentary that talks about employment and jobs for people on the spectrum.

Spenser: The whole experience was super cool, but having cameras on you is pretty awkward so that took some getting used to.

Jackson: Autism is often misrepresented in the media, and the best thing about our film is it shows us telling our story as autistic people, and how real autistic people don’t always align with the stereotypes you see in Hollywood movies. The cameras during our rehearsals may have been a bit distracting, but it was well worth it in the end.

What it’s like to be in a band with other musicians with autism? If someone without autism was going to collaborate with you, what do they need to know?

Ron: I feel so proud of being able to play in the ASD Band with talented musicians in the spectrum. Other musicians should know and understand what autism is!

Rawan: I would say that being in a band with other autistic musicians is no different than any other band. We only carry honesty, creativity, and transparency with whatever we set our minds to. We are not afraid to speak our own opinion without being judged for who we are. If we are ever going to collaborate with other musicians, it will be great because we are creative, devoted, open minded, and we think outside the box in terms of music.

Spenser: I think we’re all really talented and don’t see the disability when we work together.

Jackson: Being in a band is fun, whether the members have autism or not. But sometimes I struggle with time management and organizational skills, so if I have to record demos of new songs or do time sensitive tasks, I may sometimes procrastinate and panic about it until the very last moment. This could possibly make it a bit screwy with other collaborations I take part in.

What are the obstacles that artists with disabilities have to deal with and what can be done to remove them?

Ron: Sometimes I feel frustrated when people are talking to me and I cannot understand them. The hardest part for me is to focus and compose new songs and also the feeling of being different from others.

Rawan: As you know, autism impairs our social skills and communication. For example, in a different band, people are able to land work because of their social skills and successful networking. I feel that we are all awkward, albeit in a positive way, and this might minimize our chances in landing a gig through communication alone. We are very fortunate to have the help and support of Jake’s House.

Spenser: There’s definitely a stigma. I think films like this one can help with removing that.

Jackson: The biggest obstacle for people with disabilities, not just artists, is the stigma. Stigma can be removed with increased awareness and acceptance of those who don’t conform to societal norms.