A friend and I had been marching with the demonstration in support of Palestine when we crossed Bishop Street near the Leonard & Bina Ellen Art Gallery. We  decided to retreat from the crowd and seize the occasion to see the current exhibition Lorenza Böttner: Requiem for the Norm. Before going in, I was slightly apprehensive that the mental switch required to focus on an extensive, solo survey show would be too abrupt after coming out of such an emotionally charged protest. In the end, despite vastly different contexts and levels of violence, I was surprised to find a correlation between the two experiences: a lifelong commitment to have the right to not merely survive in constrained and dehumanizing conditions, but be safe and exist fully on one’s own terms. 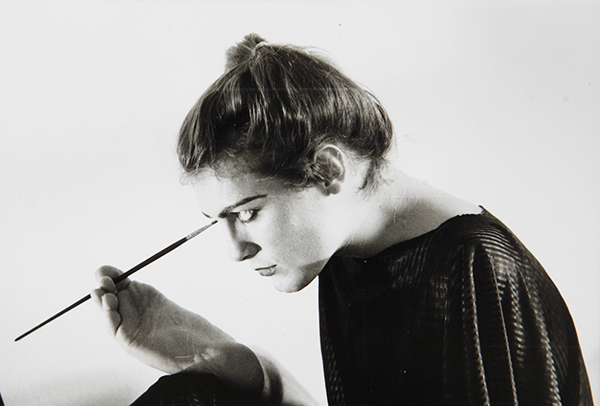 Indeed, that is the gist of Böttner’s intense sixteen year career. The Chilean-born German, non-gender-conforming, trans-crip artist (1959 – 1994) taught herself to draw with her mouth and feet, and quickly integrated photography, dance, and performance into her practice. Next to the opening exhibition text is a plexiglass box filled with small sculptures and documents relating to how Böttner lost her arms at age eight after being electrocuted trying to reach a bird’s nest above an electrical tower. Although it’s interesting to read her own typewritten recollections, I wondered if this emphasis was necessary. Exhibition curator Paul B. Preciado justifies it by stating that the genesis of the young Ernst Lorenz Böttner, developing first a functionally diverse body and, later, a trans body and becoming Lorenza, is at the essence of her art. Thankfully, the exhibition doesn’t go on to follow a chronological order; instead, it uses thematic groupings that don’t feel didactic, but do rely heavily on contextualization and, arguably, education. Through the four dozen works presented – ranging from self-portrait drawings in pen and pastel, black and white photographs, and archival documents of street and staged performances – we soon come to understand that Böttner lived in a constant state of performance, effectively making life and art inextricably intertwined. She’s simultaneously the subject, the vehicle, the maker and the result. 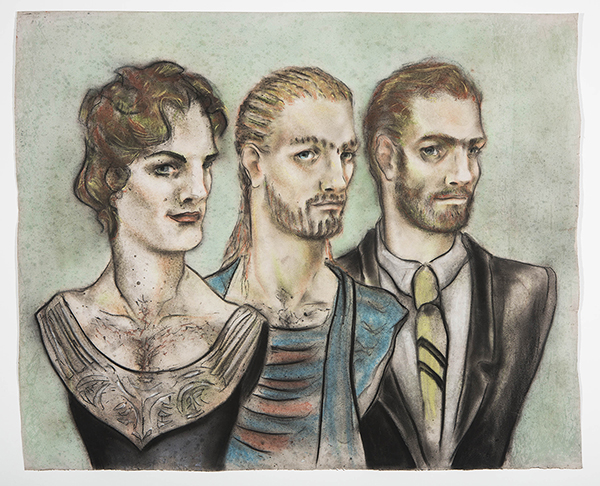 In the gallery’s entrance, a large pastel self-portrait picturing three “versions” of the artist adopting different codes of gender – a female bust with chest hair, a queer neo-punk, a businessman – sets the stage for the multiplicity and hybridity to come. In Böttner’s work, social inclusion, acceptance, and respect is not to be achieved through assimilation or the reproduction of normative ideals, which was the aim of the medical re-education s/he went through after the accident. She doesn’t merely subvert a masculine gendered identity to adopt a feminine one, but moves freely between these set binaries. The expression of her intersectional being is constantly shifting: she exists in continuous flux. In every self-representation is a different expression of Lorenza, who then, not only defies categorization altogether, but brings forth the futility of such endeavours. And so we join in the performance of this “requiem.”

Seeing Böttner’s use of the body as a carrier, repository, and enactor of will makes me understand that my body is in a constant state of becoming and a site of possibilities. But what is performance? In a room that acts as the entrance for people with reduced mobility is the short documentary Lorenza: Portrait of an Artist from 1991, made in collaboration with the director Michael Stahlberg. It opens with the artist, sporting a traced unibrow that refers to Frida Kahlo, painting a model and then performing mundane daily tasks: going to the market, driving, coming back home, confronting the all too common perception of disability. She recalls her teacher in art school telling her she was a walking performance in herself. The comment seems somewhat indelicate, referring to the “enfreakment” of non-normative bodies, but Böttner claims it allowed her to realize that “performance is simply an act of cryptic expression” that can spark chains of thoughts and interrogations. 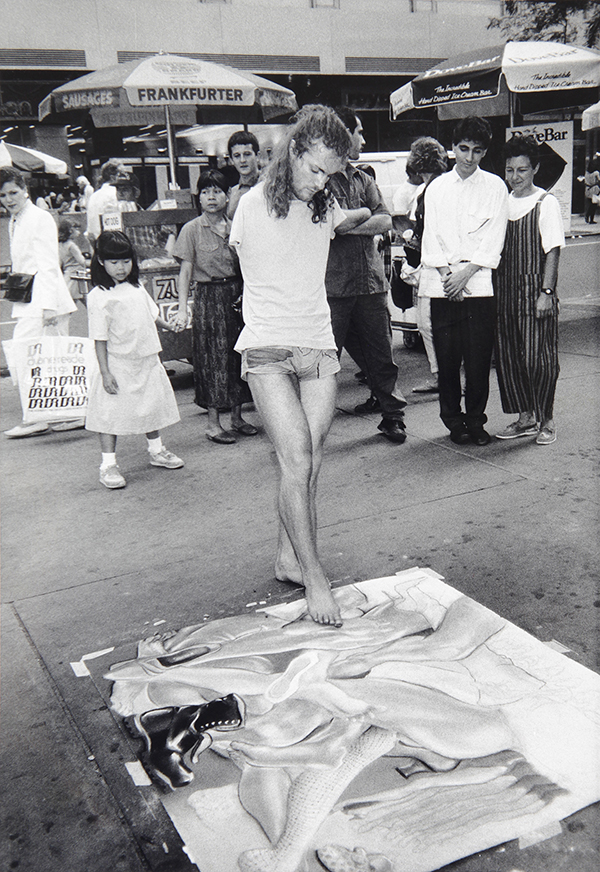 And so, Böttner always makes use of the public’s gaze in her “deliberate” creative performances to turn it back onto itself and spark a chain of reflections in the viewers. “People will stare at me no matter what I wear,” she says as we see her doing a live dance and painting performance, cat-walking and prancing in front of the public with a self-assured look. The sheer pleasure she takes in staging herself is palatable through the entire space, as if she’s doing it for herself, claiming her existence and aesthetic appeal at every instant, but putting back on us the responsibility to reciprocate by seeing and acknowledging that beauty.

Before visiting the exhibition, I was daunted by the possibility of being confronted with the way my gaze replicates oppression despite wishing myself free from such devious intentions. There’s one instance, in the second to last room, themed Museum of Desire and Melancholy, where the public’s gawking is turned back on us. In a street scene drawn in vivid pastel, passersby look over their shoulders into the gallery with repulsion and animosity. The effect is humbling if not chilling. However, all the other works testify to Böttner being an artist in control. This is how Lorenza wants to be seen: framed but boundless, fantasized and sexual, imagined, almost fantastical or mythological, with her torso twisted onto itself or with wings growing. Real.

Her rejection of pathologization is everywhere. Her personal cosmology made of the poses she adopts, the recurring motifs of flowing hair, leisurely postures, the grin, smile, laughter, and airs of seduction, the non-hierarchical mix of flowy, soft textured clothes, laced undergarments, BDSM accessories, and an exposed, nude, flexible body reveals a breath of freedom. One section showcases this joie de vivre in particular. A photographic series in which she adopts various identities through costumes, makeup, and poses on the same chair recalls the liberation of the carnival, rather than a freak show. We find ourselves in a life-affirming space, without suffocating compromises.

My favorite piece is at the beginning, but it was made as the artist was nearing a premature death. On a medical napkin, she drew colorful flowers in a vase. They’re also moving towards an unavoidable death, precipitated by the cut. Yet here they are captured at the peak of their vividness. They are boastful like Böttner. Simply calling this resilience doesn’t do it justice. It is the expression of boundless imagination for oneself.

Eve Tagny is a Tiohtià:ke/Montreal-based artist. Her practice considers gardens and disrupted landscapes as mutable sites of personal and collective memory inscribed in dynamics of power, colonial histories, and their legacies. Weaving together lens-based mediums, installation, text, and performance, she explores spiritual and embodied expressions of grief and resiliency in correlation with nature’s rhythms, cycles, and materiality. She has a BFA in Film Production from Concordia University and a Certificate in Journalism from the University of Montreal. Her recent exhibitions include Musée d’art contemporain de Montréal and Centre Clark, Montreal, and Cooper Cole, Gallery 44, and Franz Kaka, Toronto.